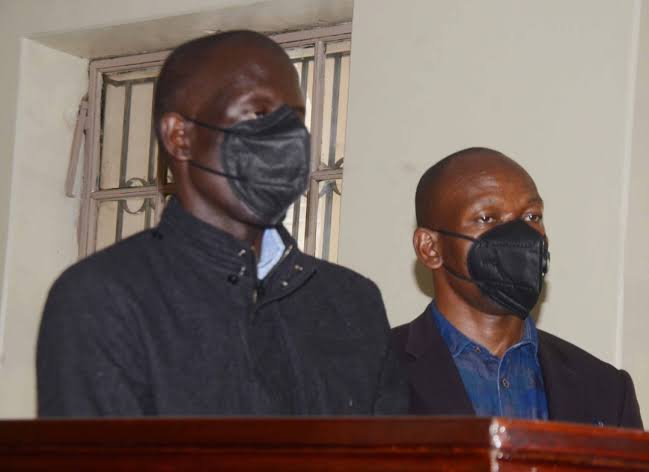 If you were a keen observer of events at Christian Life Church, you could have noticed Israel Wasswa aka Jordan Banura.

He was always smartly dressed, and his role at the Church was to guard Pastor Jackson Ssenyonga and recruit desperate women to give false testimonies at the Bwaise-based Church.

“He was always dressed smart, moving from one place to another with body guards from Counter Terrorism Police and Army officers. One wondered why? Who is Wasswa? It was also claimed that he was attached to Col. Edith Nakalema’s Anti-Corruption Unit. However, he was just a conman,” a source at the Church said.

“Like any conman, he used the cover of the Church and being a body guard to Pastor Ssenyonga to dupe and intimidate and also terrorize people wherever he was sent. He had no respect for the law and offices. Even during his trial, he used to come with his bodyguards to intimidate the judge and prosecutors,” the sources added.

This is the man, who until his conviction was a chief body guard and aide to Pastor Ssenyonga.

At the Church, he was also responsible for recruitment of desperate women to testify in Church on how other Pastors are, fake, and it is only Christian Life Church and Ssenyonga that have the true calling.

“They would testify at Christian Life Church how pastors like Makabai, the late Yiga, Kakande and Kayanja are false. Each person that testified against other pastor was being paid for by Ssenyonga through Wasswa. There are recorded testimonies of such women confessing to police and pastors they offended. Wasswa also opened a case against Kamiat Nansasi and Peter Ojulong and caused their illegal arrest and detention at Ssenyonga’s police station at Kavule accusing them of allegedly meeting brother Ronnie Makabai,” another source familiar with Wasswa’s criminal record and dealings with Ssenyonga said.

“Wasswa master minded the arrest of pastors in Butalejja with a fake case that those pastors have defamed Ssenyonga, and caused their detention at Kasangati Police station. Wasswa also opened a case against pastor Ronnie and Samanya at the same Kasangati police station, saying that that they talked bad about Ssenyonga. Wasswa is also behind another land case between Ssenyonga and Ronnie at land division,” the source added, noting that Wasswa also masterminded a series of criminal cases against Pastor Ronnie Makabai, and he is the brain behind the fake accusations against Pastor Kayanja on sexuality and other stage managed demonstrations at the Rubaga-based Church.

Known as Pastor Ssenyonga’s top henchman, Wasswa is a former crime preventer, and a key mobiliser of the Bodaboda 2010 group.

On Pastor Ssenyonga’s instructions, Wasswa would spy on and track all city pastors to find out about their homes, family, children etc.

In fact, some of his former workers and accomplices in crime such as Peter Ojulong attested to these machinations that Wasswa used to execute on behalf of Ssenyonga.

In fact, commenting about the Wasswa group at Ssenyonga’s church, the former Police CID Charles Twine, described Wasswa as a notorious person who opens up fabricated cases against other pastors on order of Pastor Ssenyonga.

“Twine cited an example of the case that Pastor Ssenyonga told Presdient Museveni when he visited the Church that Pastor Kakande kills people and in his Church there is a massive grave. Police carried out investigations and no skull or grave was found in the Church. They even accuse other pastors of sodomy and rape, but according to police investigations, they are all lies. Instead, Ssenyonga’s team was convicted for robbery in the High Court,” a police source said.

On June 2, 2022, Wasswa and two other former guards of Christian Life Churh pastor, Jackson Ssenyonga, were sentenced to prison after they were found guilty of robbing a member of the congregation who had gone to attend service at the church.

The chief guard, Israel Wasswa was given five years while one of his accomplices, Ivan Wanyama, a chapatti maker was given 10 years after they were found guilty of aggravated robbery.

Godfrey Mwanda alias Kefa was given two years while another accomplice, Ali Ojulongo alias Peter who was also a guard at the church on June 8, 2018 when the offence was committed, was convicted of the same offence.

According to Justice Muwata, the convicts’ defence against the charges was bristled with inconsistencies with one of them saying they were not at the scene (church) yet his accomplice confessed to having been at the church with them by the time the crime was committed.

“Although it was indicated by the convicts that it was dark and the witnesses could not have seen them, I disagree with them as the crime occurred at a church where there was sufficient light for the witness to identify them while participating in the crime,” Justice Muwata said.

The judge also noted that Wanyama was given more years in prison than his accomplices because he was the most violent person when they attacked and robbed their victim, Sam Mukula.

Mukula told court that he was robbed of Shs500, 000 cash and a mobile phone worth Shs35,500 at church where he had gone to attend prayers.

Sources at Ssenyonga’s Church said Wasswa has been replaced with Aggrey Gershom Kenene aka Kuggu.

“Now Wasswa and team are behind bars, Pastor Ssenyonga has replaced Wasswa with Aggrey Gershom to continue with the dirty work from where Wasswa stopped. So far he has been seen already at police offices and the judiciary,” the source said.