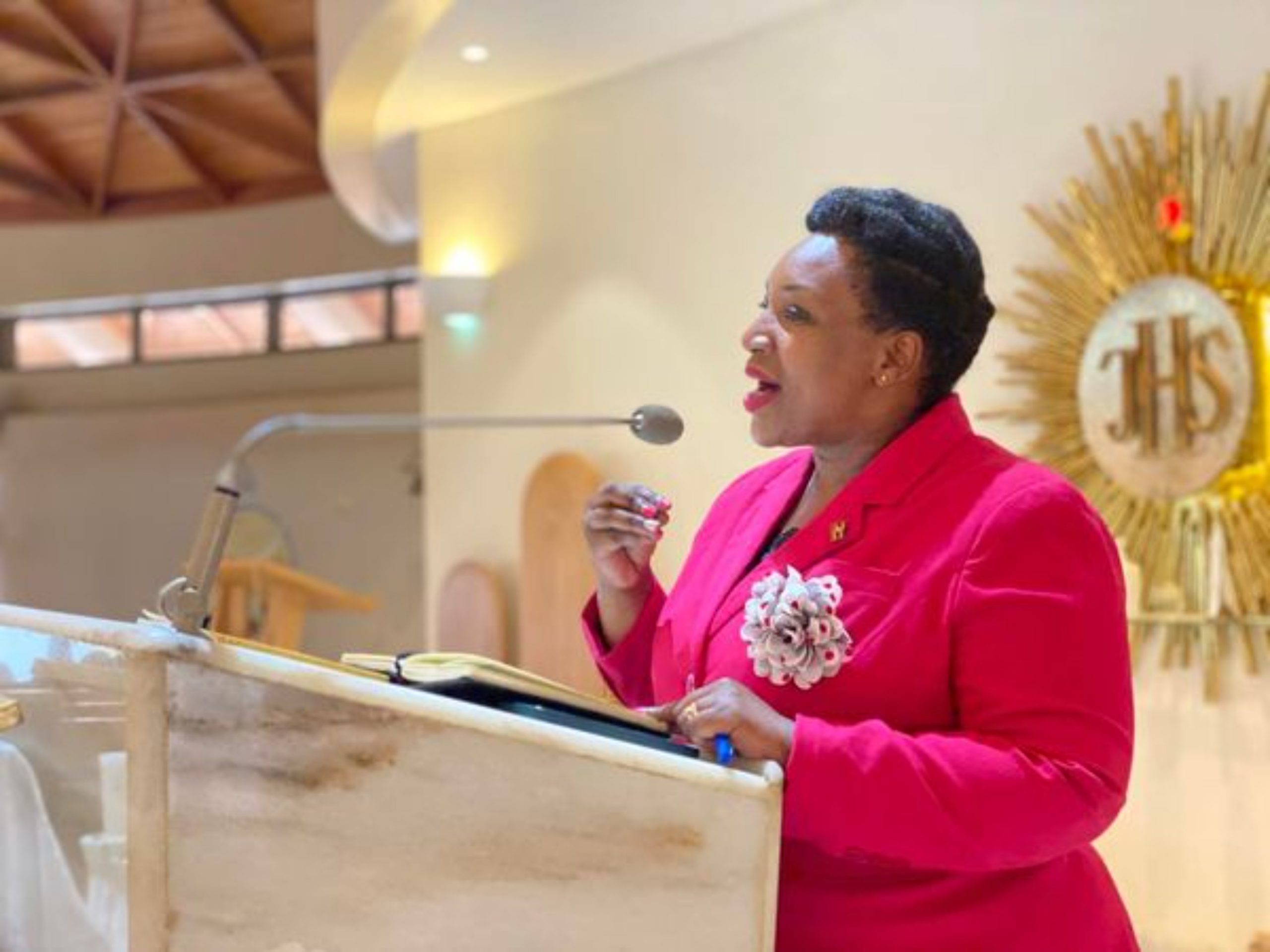 Married couples must hold onto their partners and stick to their vows with the help of Christ if they are to succeed in their vocation.

The call was made by Mrs Patricia Agarukire Mulumba a teacher, mentor, motivation, inspirational speaker, and author.

She spoke at Munyonyo Martyrs’ Shrine- Minor Basilica during Day two of the Novena for the Ugandan Martyrs. In her talk, Ms Agarukire noted that marriage is the best vocation any Christian can choose, but it is also an educational journey.

“It is only in a marriage where two people are awarded their degrees and certificates and later start lectures. There is no way someone can teach you the challenges you will meet in your marriage. Because the challenges in my marriage are different from those of my neighbours,” she said.

The author of Perfect Imperfections- Living the dream of a marriage that lasts a Lifetime (a book that has blessed so many marriages), added that Mattias Mulumba Kalemba also known as Matiya Mulumba, after learning what the Church teaches about marriage, went back home and sent away his many women and stayed with only one wife.

Agarukire challenged men who are sleeping around with many women to stop, emulate Mulumba and go back home to their wives with whom they vowed to stay forever. She also urged husbands to allow their wives to go to work and contribute to the financial well-being of families.

“So, if you have multiple partners on top of your spouse, please go back and do what Matiya Mulumba did. Also, the Uganda martyrs were hardworking. The couples should be hardworking as well. If you have a wife, allow her to work too because if you deny her that right, you will carry all this burden alone,” said Agarukire.

She further urged them to hold on and be patient with their partners of faced with challenges. This, she said is because even when the Martyrs were being burnt, they did not cry for the fire to stop, they asked for more fire to be added. They faced their killer with courage.

“Even us as married people should learn to carry our crosses because martyrs teach us to be resilient, courageous and patient. The King thought he had incinerated them and ended religion, instead, he had fueled it. Now in marriage, whatever challenges you are going through, hold onto the Christ who gave you that spouse.”

Agarukire called upon couples, especially parents to lead by example, just like St Balikuddembe who when he made a decision to die for his faith, his followers did the same.

“He led by example. Even in marriage, pair children are watching whatever wrongs we do. We must walk the talk. They promised to hold onto Christ until the end. Even married people make the same vows of until death do us part. But after one month, we start wanting to run away. We must stick to the decisions we make until the end of time” said Agarukire.

“We should remember our vows, be children who show children the way, pray with them, sacrifice like the martyrs. Let our marriages be an example to the world and inspire those who are still single. If we do so, we shall celebrate several anniversaries. If you are mistreating your wife and children, you no longer leave kameza money. God is watching you” she added.

Meanwhile, the main celebrant Fr Ronald Kyambadded urged all Ugandans to come closer to God, especially through Holy Communion. He further noted that they should seek interception of the Uganda Martyrs because they ate the same food and slept like them, hence understanding their prayers when Ugandans seek their intercession.

Fr Kyambadded added that each time we meet a challenge, we should look at the Uganda martyrs and remember their courage.

“They did not have a chance to have Mass daily and Mass was in Latin. Why are we failing to live like them?” he wondered.

Fr Kyambadde gave an example of Kiyinda Mityana Cathedral which is built with three wings representing three Uganda Martyrs Noah Mawagali, Luuka Baana Ba Kintu and Matiya Mulumba. The Church is built in the same spot where Luuka’s house was.

He noted that Luuka used to trek to Kampala for Mass and then walk back to Mityana and teach the others what he had learnt. Father explained that Luuka’s strength came from the Holy Eucharist which he received at Mass.

Patricia Agarukire Mulumba is a teacher by profession, a mentor, motivation and inspiration speaker, the author of Perfect Imperfections- Living the dream of a marriage that lasts a Lifetime ( a book that has blessed so many marriages) She is also a businesswoman, counsellor, life coach, go-getter and the CEO of Perfect Evolvers Ltd which is your home for comfort, growth and evolution because you are worth it!

She is God-fearing and spends most of her time serving the Lord at Lubaga Cathedral as a museesa for Tuesday class. Patricia is the coordinator of Lubaga Cathedral Tuesday class Alumni Association and has recently published as an editor, the first edition of the Catholic Marriage Torch, a magazine that highlights catholic family traditions, weddings, lifestyles and tips on how to raise our children in the Catholic faith.

She is married to one husband who is a man Prof. Mathias Mulumba Bwanika the Dean of the School of Education and together, the couple has four children.

She is publicly known as the Lover of Love and she believes that her purpose in life is to inspire before she expires.

Today’s Day three talk will be given by former Principal Judge Justice James Ogoola. The Shrine rector Fr Male Ulman says that despite being from the Anglican Church, Justice Ogoola is a friend of Munyonyo Martyrs Shrine.