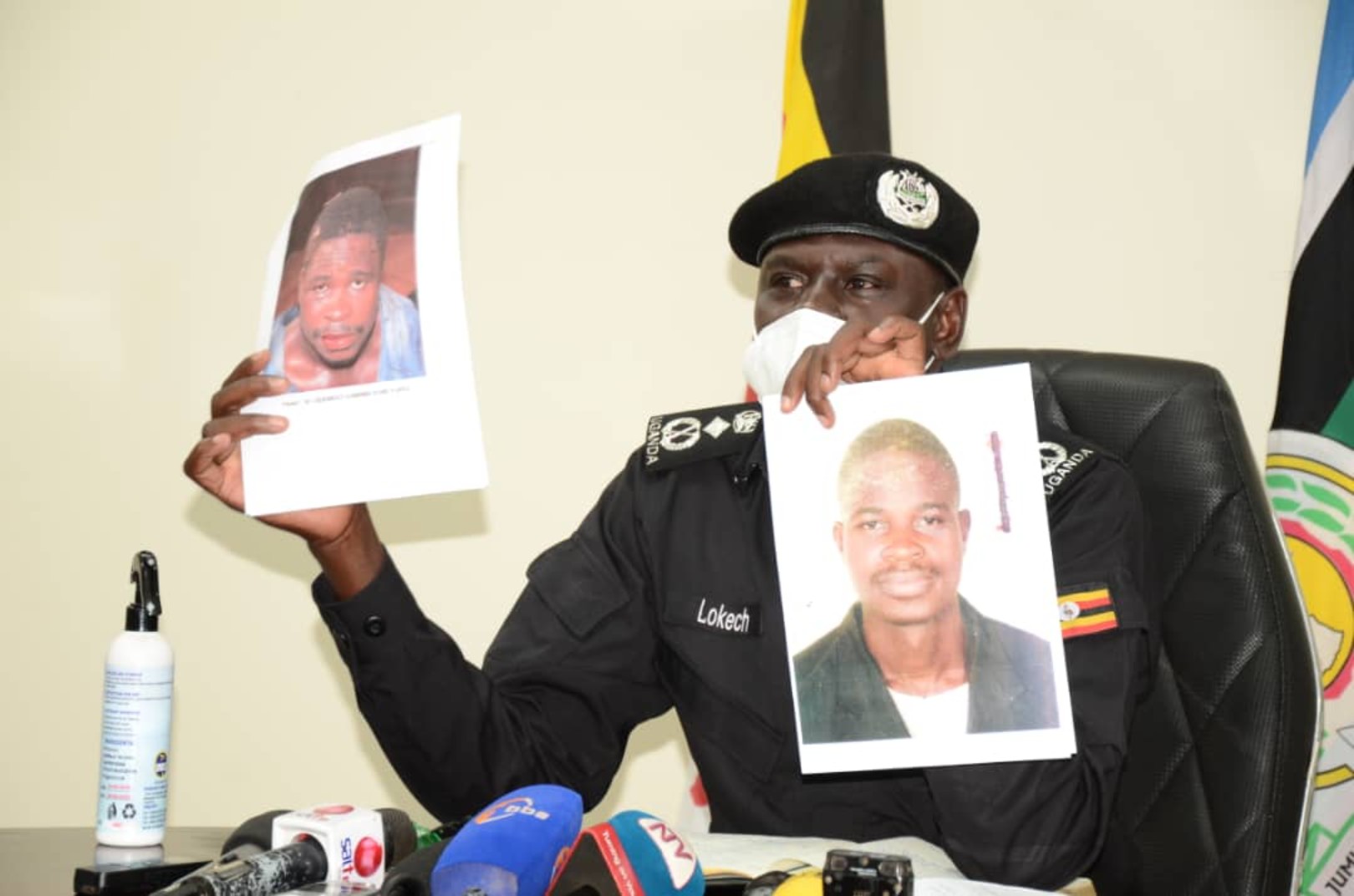 The Task Team actively investigating the double murder of Nantogo Brenda and Kayondo Haruna; and the attempted murder of General Katumba Wamala and his body guard Sgt. Koboyoit Khalid, has made a major breakthrough, and arrested 4 more suspects, highly connected to the double murder and attempted assassination which occurred on the 1.06.2021.

The major breakthrough was as a result of the man leads, that were actively pursued by the task team, and led to the arrest of Muhammad Kagugube alias BAFUMOYA on the 26.06.2021.  Upon interrogation, he admitted to having participated in the violent attack, when he carried out surveillance on the movement of General Katumba Wamala from his home.  He immediately alerted the assault team, as soon as he spotted him and the direction he was taking.  After alerting the assault team, he went up to Bukoto near Oryx Petrol Station, where he waited for the two guns, but received only one and rode away with it.

The suspect provided details, which led to the arrest of Walusimbi Kamada alias MUDINKA alias OGEMA, one of the riders who transported the shooters.  Upon his arrest, he led the team, in reconstructing the scene and clearly demonstrated how the double murder and attempted assassination took place.  And how he transported his shooter called KANAABE, through Kisota-Kisaasi-Bukoto upto Sebagala road, where he handed over the motorcycle to the shooter, Kanaabe.  A thorough search was conducted at all his known premises and valuable exhibits of a black helmet, 10 jackets, and one of the motorcycles used in the planning, preparation and execution of the plot recovered.  The suspect was taken through the footages of surveillance and execution, and positively identified himself while riding one of the shooters, KANAABE.

The task team proceeded to Kawanda village and arrested KISAMBIRA SIRIMAN alias Mukwasi who received one of the killer weapons, from Lutwama Hussein alias Master, which he also later handed over to another member of the terror cell known as Mustafa Kawawa Ramadan alias AMIN alias MUSA.  Also recovered from him was a motorcycle, under registration number UEJ283L which was used in the plot.

The team followed up and arrested Mustafa Kawawa Ramadan alias AMIN alias MUSA, from his home in Maganjo “B” LC1, Seruwumba Sub-zone, Maganjo Parish, Nabweru Division.  Upon search at his home, various exhibits, including materials used in making improvised explosive devices were recovered, as well as Al-Qaeda training manuals on how to make and detonate bombs, military materials, secret communication codes, and several Western Union transfer receipts from foreign services.  Also recovered are two T-shits used during the surveillance of General Katumba.

The task team further tracked down and arrested Lubwama Hussein alias Kinene Christopher alias MASTER, a resident of Kabulengwa – Kyebando in Nansana Municipality; who was arrested along Nansana Nabweru road.  The suspect who was the team leader and head of the domestic terror cell, put up very stiff resistance to the extent of grabbing a gun from an officer, but was subdued by the task team. He later succumbed to the injuries.

He was the mastermind behind the plot, and the one who commanded all the other suspects before, during and after execution of the planned assassination.  He provided all logistics of guns, motorbikes, mobile phones and facilitation used in the surveillance and execution.

We have now established that the overall coordination of these domestic terror cells is by Sheikh ABUDIN HUBAIDA TAHEEL BUKENYA, an ex-ADF combatant who was given Amnesty, but has violated it.  He is reactivating the domestic terror cells and is the brain behind the recruitment of assailants like Muhammad Kagugube alias BAFUMOYA and Lubwama Hussein alias Kinene Christopher alias Master.

The group has been behind the robberies of Nansana Cheap Store, Ntake Robbery and Murder and the robbery on the Supermarket at Mpererwe.  Their linkage to the earlier suspects, charged to court is that the killer gun, is linked to the murder of the late AIGP Andrew Felix Kawesi and Major Kiggundu.

We would like to confirm that this is a straight forward case of political violence and domestic terrorism.  The suspects are part of the team that trained in the North Kivu ADF camp and had started reactivating the domestic terror cells in the country.

We want to applaud the Joint Task Teams for their breakthrough in cracking down the terror gang. We are now pursuing other members of the emerging domestic terror cell including the second shooter, KANAABE.

As I conclude, I would like to reassure all Ugandans and visitors to the country, that we continue to monitor the bad elements and all terror hotspots to help prevent the re-emergence of such acts of domestic terror aimed at undermining the prevailing stability, peace and security in the country.