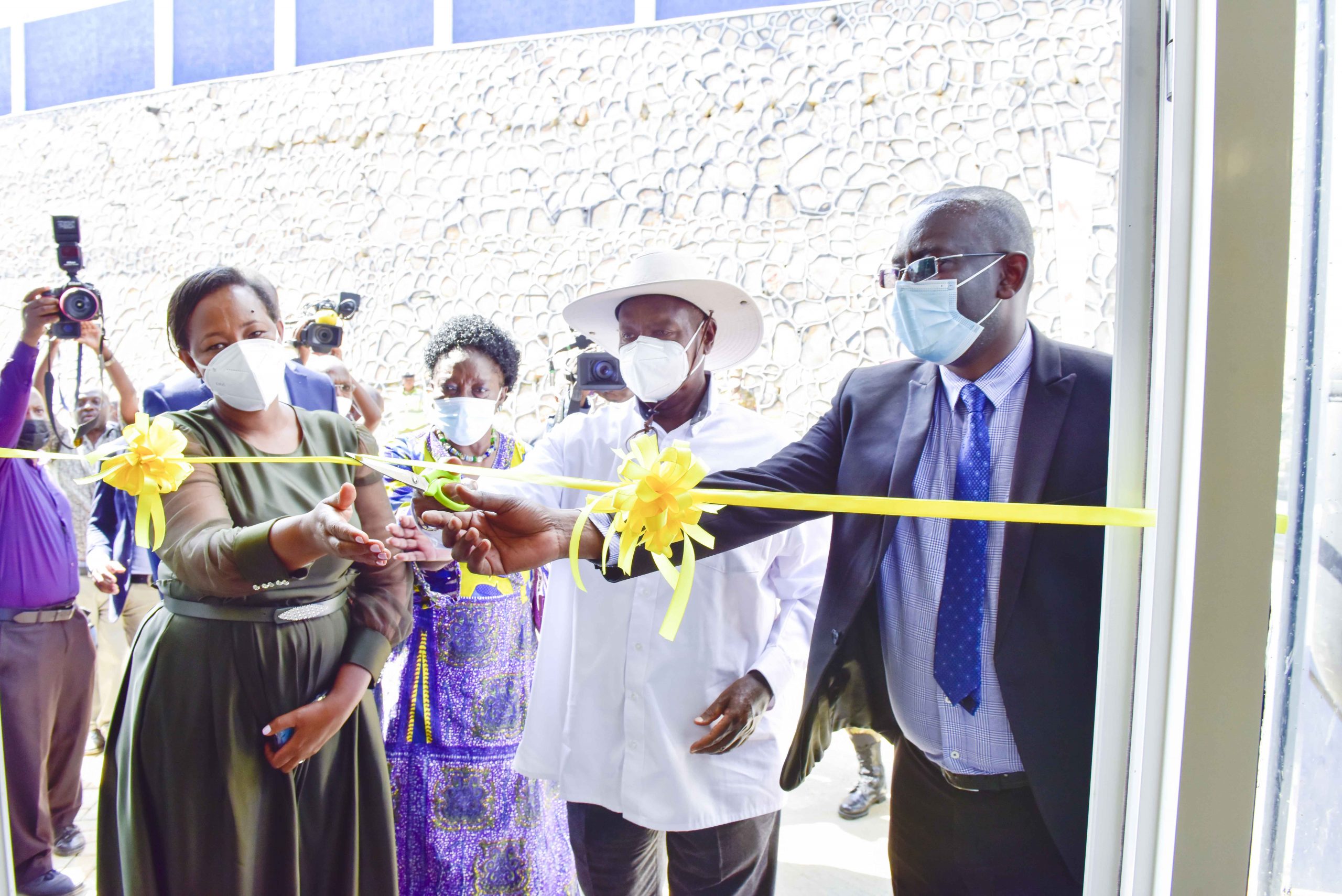 President Yoweri Museveni has commended the proprietor of Dei Biopharma Pharmaceutical Company, Mr Mathias Magoola, for embracing one of the core values of the NRM Government of developing Uganda through socio-economic transformation.

While commissioning the pharmaceutical manufacturing facility in Kigogwa, Matugga, on Friday,  President Museveni said that from the very beginning, the NRM Government told Ugandans that it wants to build a new economy that is able to stand on its feet [Not that one of importing] and that he was very happy with Mr Magoola for taking in the advice that has led to the formation of a state of the art locally owned biological drugs and vaccines manufacturing plant.

“I salute Magoola. Despite being persecuted, he stayed put. He is a fighter. Again a new war started between him and the Indians whom he had teamed up with. They cheated him. I salute Magoola, his family and his colleagues because this is part of ‘National Resistance’. We resist and stay on course. Now Magoola had to fight. Every African who wants to do something important neo-colonialist puppets fight him. They don’t see value in important things,” President Museveni stressed. He castigated those who frustrate our scientists saying that they are agents of neo-colonialists.

“We are moving slowly. The NRM is strong. Let’s us now all be unanimous in supporting NRM’s point number five of building an independent, self-sustaining economy.”

On the issue of limited raw materials to be used by the pharmaceutical plant, President Museveni assured the factory that they should not worry because Ugandans are very hard working and will be able to produce the required material.

“We now need additional raw materials like pharmaceuticals grain starch. The starch is grown in India now. Drugs at Quality Chemicals are still expensive. Why? because they import raw materials from India yet we have cassava here where we can get starch. We also need to make that sugar that is used as a sweetener in the pharmaceutical companies,” he disclosed.

“I want to assure you of raw materials. Ugandans are very hardworking. If you give them guidelines, they will make the raw materials. The 5 million tonnes of cassava you want will be grown. If there’s a sure market, that five million is nothing. People are beginning to wake up slowly. We shall support you. I want to thank Equity Bank. They are clever people. They have got good spectacles to see where value is.”

President Museveni further said that If there’s consensus among Ugandans, the country can have a modern economy and then it shall be able to move very fast as far as development is concerned.

“The NRM supported by these young people like Magoola is bringing new sectors which never existed in Uganda. These are big economies. You can see that we are totally entering a new phase in Uganda by broadening our economy. If we can have a consensus among all leaders the political, economic and cultural leaders and all Ugandans we can move faster.”

The Shs1.8 trillion (USD500 million) facility in Kigogwa sits on 150 acres of land and it’s set to benefit Ugandans and the globe at large as it will manufacture quality Biological Drugs and mRNA Vaccines that will be sold at relatively low prices to their clients. DEI Biopharma will produce all the biological medicines listed as essential drugs, including filgrastim, erythropoietin, and trastuzumab, among several others.

“There was a time when agencies didn’t have time for Mr Magoola. They frustrated him but you believed in him and supported him. I called you when things were not working out. You supported him; you said we needed this,” Rt. Hon. Kadaga applauded President Museveni.

“It’s my pleasure to inform the Congolese,  Kenyans,  Sudanese,  Tanzanians and others that quality drugs are now here. They should support us.”

The former Prime Minister, Rt Hon. John Patrick Amama Mbabazi expressed gratitude to Dei Biopharma for setting up a pharmaceutical company that will improve the healthcare of all Ugandans.

“I also congratulate you,  Your Excellency, for the role you have played in promoting and supporting this project. You have fully supported it even in the difficult times when it seemed crippled,” Rt. Hon. Mbabazi said.

“Your Excellency, you said science, technology and Innovation are the drivers of our economy and some Ugandans ignored your call but a few like Dei Biopharma listened to you and put up such a facility in this village of Matugga,” she said.

“Mr Magoola is testimony that Ugandan business people can compete favourably with foreign investors if they listen to your advice. Allow me to request you offer support to Dei Biopharma in areas where he still needs assistance. Let us ensure that this facility is raised to global standards and becomes our successful pharmaceutical reference to the world, “the Minister asserted.

The Ministry of Health Permanent Secretary, Dr Diana Atwiine, revealed that they are ready to support and stand with Dei Biopharma until they achieve their goal.

“When they came to us at the Ministry and gave us a list of the medicine they wanted to manufacture, we thought this was a big dream. We want to assure you that we are going to stand with you until you achieve your dream,” Dr Atwiine assured.

“Most of the medicines Dei Biopharma wants to manufacture are not manufactured in the country and they are expensive. They’re looking at manufacturing cancer drugs and other medicines that we get from abroad at a high cost. With the coming of such a facility we are going to see a huge rise in the biochemical and pharmaceutical sectors in the country,” she added.

Mr Benedict Muhigo, the Ag. Managing Director of Dei Biopharma who represented Mr Magoola affirmed that the plant is up and ready to take Uganda’s pharmaceutical industry to the next level.

He lauded President Museveni for seeing ‘gold’ in Dei Biopharma and ensured that it becomes a success story.

“Some people whom Mzee had instructed to support this idea, started fighting it because they thought it was a waste of time. But Mzee being a Visionary leader, sees opportunities where others don’t see. Behind all this success,  it has been you,” Mr Muhigo said as he read Mr Magoola’s speech verbatim.

“We would like to thank you for your intervention through Uganda Development Bank which gave us USD 20 million. Your Excellency, we still need your support to finish setting up the remaining buildings. Our projected revenue in 5 years is expected to be USD5 billion but our target is USD10 billion in 10 years,” he revealed.