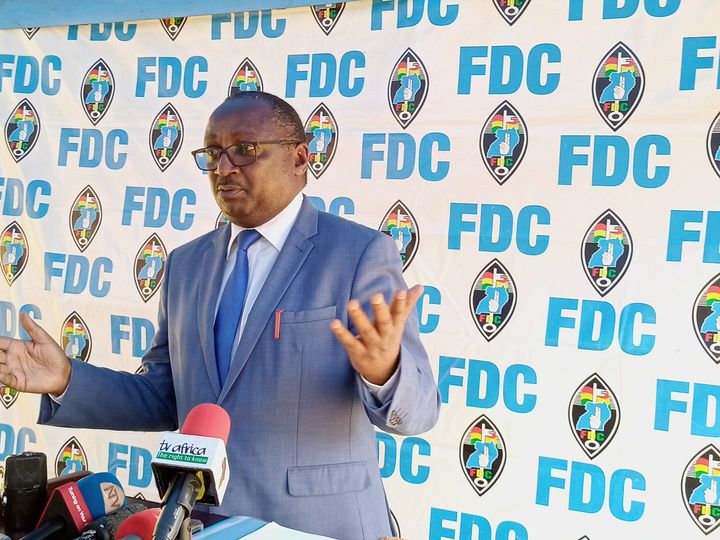 The opposition Forum for Democratic Change, FDC party has lashed at the Ugandan security forces for attacking and brutalizing innocent Ugandans.

John Kikonyogo the FDC Deputy spokesperson says the latest victims are journalists who were terrorized by Military police officers at Kololo recently, where they had gone to give coverage to NUP president Robert Kyagulanyi as he delivered a petition to the UN Human Rights offices.

Kikonyogo says the Uganda police force and sister security agencies are no longer civil, but instead are fighting anyone seen as an opponent of the sister.

He noted that police has been infused with the army and that most departments in police are now handled by the army.

“Talk about your case which happened in front of the UN Human Rights office where some of your friends were attacked. But this is not an isolated case with journalists only, for us politicians have been a daily meal to these forces. They have been torturing our brothers and sisters who are politicians and it is becoming the order of the day” Kikonyogo said.

He added that as FDC, they take and exception that Ugandans should not allow the abuse of human rights in their country.

“This inhuman and degrading treatment must stop because we are a country of people not animals. They maybe journalists, but they are Ugandans first. This mistreatment leaves some of our brothers and sister impaired, the case of Lwanga he may never be the same again, Mr. Akena may never move again properly. It is so disheartening to see our brothers and sisters who are walking normally, two minutes after all of them are on clutches” Kikonyogo noted.

He informed Ugandans that it is their duty to fight for their rights as nobody is going to help them if they don’t fight as Ugandans.

“You saw what happened at the UN offices, you were attacked in their compound, but the only thing they can do is just pass a statement. That is a signal to you Ugandans that this is our duty to fight for our rights, nobody is going to help us.

On Sunday, Judith Nabakooba the Minister for ICT and National Guidance said Government respects and takes the freedom of the media seriously and has over the years worked hard to ensure that the media industry in the country progresses without any interruptions.

We must remember that Uganda has one of the most vibrant media industries in Africa. Incidents like those of last week are rare and should not define what Uganda has achieved.  We call upon everyone to accept the regrets from the leadership of the army with an open heart.

What next? Kyagulanyi withdraws election petition from Supreme Court
We won’t resort to violence like Museveni- Kyagulanyi rules out going to the bush
Advertisement