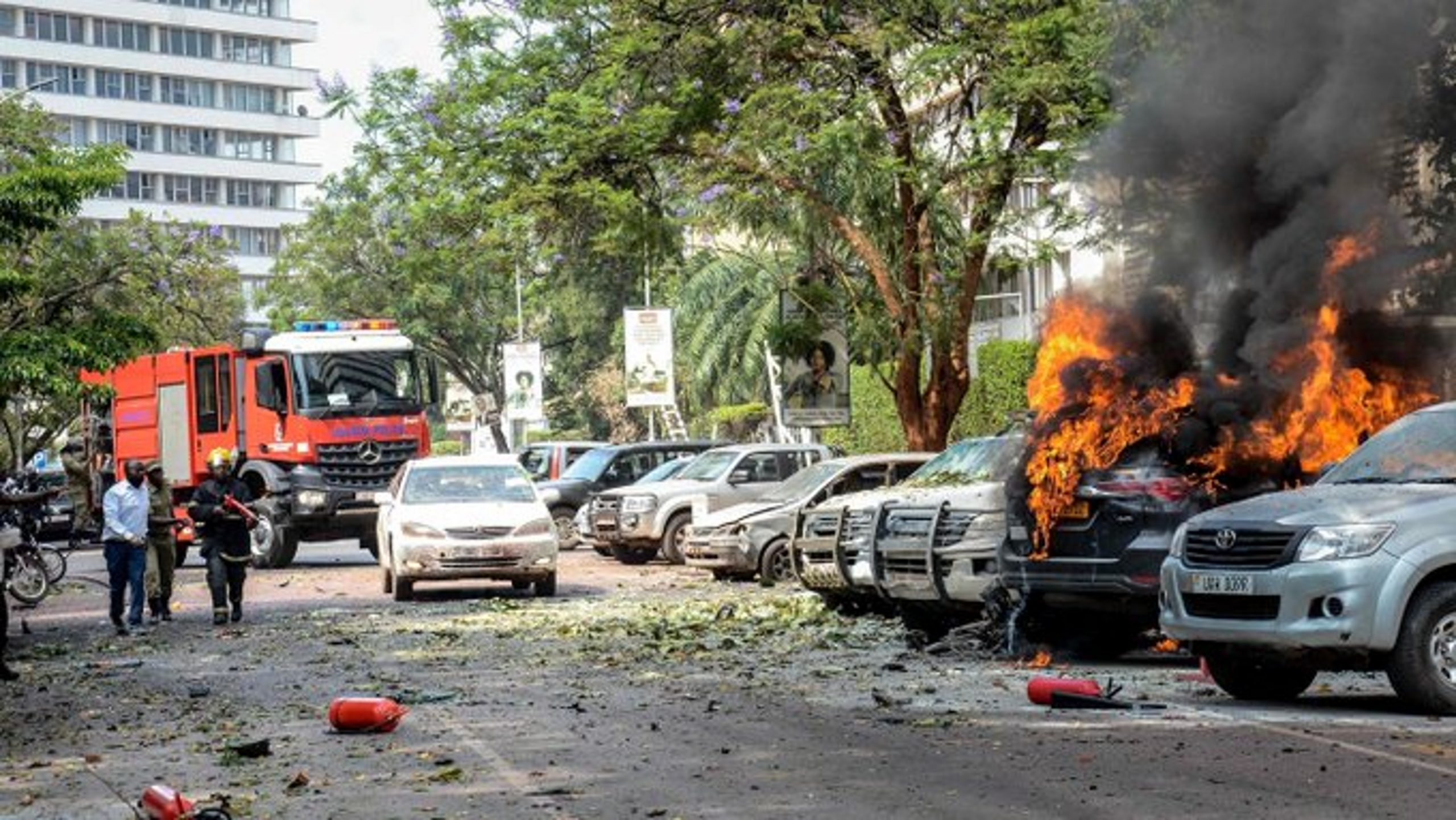 The police have warned members of the public to be vigilant ahead of the first anniversary of the deadly November 16th terrorist attacks that occurred, at CPS Kampala and Parliament Avenue.

SCP Enanga Fred the Police Spokesperson says that while it is important to remember the three innocent civilians, George Katana, Basibe Ismael and Sande Christopher who died from the bomb attacks, and also honour the life of PC Kungu Amos, who lost his life while manning the checkpoint at CPS Kampala, Ugandans must do it cautiously.

“We would also like to honour, the 37 police officers who sustained serious and critical injuries, while on duty at CPS Kampala on that day. Their sacrifices have continued to make our country safer and secure, and thus enabled the public to go about their daily activities normally,” said Enanga.

He added that although there are no specific threats directed at our county at this stage, terrorists have a philosophy of conducting repeated attacks during anniversaries. Enanga says the Joint Security Agencies will continue to call upon all Ugandans and visitors in the country, to remain vigilant, and united in the fight for Uganda’s values of freedom, liberty and dignity.

According to Enanga, the counter-terror task teams have intensified their efforts to eradicate the ADF, within the country and in the DRC, as one way to prevent future attacks. He noted that since September 2021, the number of counter-terror operations and investigations of suspected domestic violent extremists has increased.

“For instance, on 20/09/2021, our task teams foiled a planned attack on the mourners at the burial of the former DIGP, Lt. Gen. Paul Lokech; on 7/10/2021, there was an explosion in Kawempe Police barracks, which destroyed two uniports, on 23/10/2021, the bomb attack on Digida Pork Joint at Komamboga killed Emilly Nyinaneza and injured others; on 25.10.2021, another suicide bomber, identified as Matovu Isaac aka Muzafaru, blew up himself in an Ishaka bound, Swift bus at Lugala-Mpigi; on 16/10/2021, suicide bombers detonated improvised explosives at CPS Kampala, and at Parliament Avenue; on 11/03/2022, an improvised explosive device was recovered at the home of Kaggwa Umar, at Kireka-Biira in Wakiso,” added Enanga.

The operational teams also conducted a search at the home of Kalyowa Moses aka Mozzy at Katooke – Nabweru, where they recovered an IED. Several other counter-terror operations against ADF were carried out in Lukaya-Kalungu and Butambala, where several suspects were arrested and materials used in the manufacture of IEDs were recovered.

In May this year, police CI operational teams arrested Kyeyune Isma alias Beckham alias Buguman and 30 others who admitted to operating a domestic ADF terror cell. Several IEDs manufactured by the suspects were recovered and exhibited.

“As we have always indicated, the attacks are from known enemies, the ADF and UCFC rebels, who seek to commit violent criminal acts in furtherance of their political goals and ideologies. As Ugandans, we should reject terrorism, in all its forms, because it totally undermines the values of liberty, humanity, freedom and togetherness, which our country, Uganda dearly holds,” his statement continues.

As the Joint Security Agencies, Enanga says they continue to prevent, disrupt and dismantle terror cells and activities (including domestic violent extremism) in the country. The UPDF and FARDC forces have been very instrumental in rooting out the ADF from their strongholds in the DRC.

“In addition, we have also intensified operations along our borders to prevent any illegal and hostile crossings and are continuously pursuing all perpetrators involved in terrorist financing, and in the recruitment and radicalisation of children, among others. We want to reiterate that all persons arrested and those we are pursuing are not targeted for their beliefs, ideology, or religion, but due to their acts of conspiracy, and hostile engagements of violence perpetrated against Ugandans.”

DIGP Katsigazi promises to thwart any rebel activities in Luwero
Horror as man stabs his wife, her lover to death
Advertisement