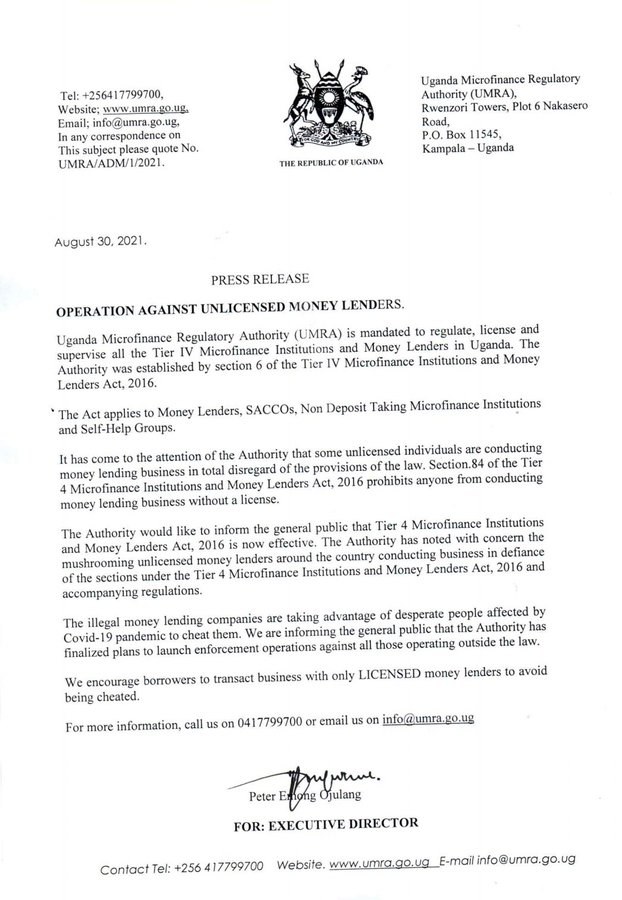 Ugandans have been warned against dealing with unlicensed Money Lenders who are taking advantage of them, during these COVID times.

The warning was sounded by Peter Emong, the Executive Director Uganda Microfinance Regulatory Authority (UMRA), the organ mandated to regulate, license, and supervise all the Tier IV Microfinance Institutions and Money Lenders in Uganda.

While addressing reporters at Uganda Media Centre on Monday morning, Emong warned that they have finalized plans to launch enforcement operations against all money lenders operating outside the law.

According to Emong, it has come to their attention that some unlicensed individuals are conducting money lending business in total disregard of the provisions of the law.

He noted that Section.84 of the Tier 4 Microfinance Institutions and Money Lenders Act, 2016 prohibits anyone from conducting money lending business without a license.

Adding that the illegal money lending companies are taking advantage of desperate people affected by the Covid-19 pandemic to cheat them.

“We are informing the general public that the Authority has finalized plans to launch enforcement operations against all those operating outside the law.” He encouraged borrowers to transact business with only LICENSED money lenders to avoid being cheated.