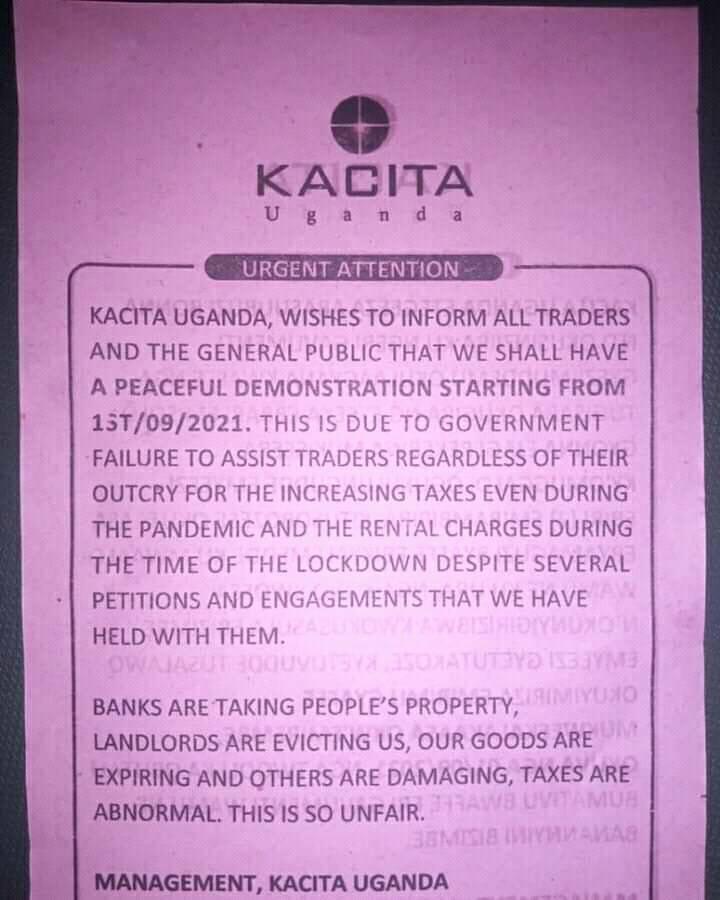 A peaceful strike called by Kampala City Traders Association-(KACITA), scheduled to commence this morning has been called off.

On Tuesday, a notice was shared on social media, announcing a decision by KACITA to hold peaceful demonstrations, following a series of meetings involving KACITA, Ministry of Finance, Planning and Economic Development, and the Ministry of Trade Industry and Cooperatives.

“KACITA Uganda wishes to inform all traders and the general public that we shall have a peaceful demonstration starting from 1st September 2021. This is due to the Government’s failure to assist traders regardless of their outcry for the increasing taxes even during the pandemic and the rental charges during the time of the lockdown despite several petitions and engagements that we have held with them. Landlords are evicting us, our goods are expiring and others are damaging, taxes are abnormal. This is unfair” the notice reads.

Following the meeting, the Ministry of Finance and the Private Sector Foundation of Uganda, PSFU, appealed to the traders to give the government a week within, to make it’s final pronounce on the revised tax policy of textiles. The traders are opposed to taxation based on the volume of the import as opposed to a percentage of the value.

Musoke Thaddeus Nagenda, the KACITA Chairman had told the media on Tuesday after the meeting with the Finance Ministry that they had failed to secure an acceptable position from the government, and would therefore proceed with the strike.

However, Nagenda now says the most contentious issue was about the goods that had already been ordered before the new tax policy came into place and were either in transit or in customs bonded warehouses.  The traders have been told that they can clear such cargo under the previous tax measures.

Amos Lugoloobi the Minister of State for Planning, on Tuesday afternoon, chaired a meeting of textile traders and manufacturers to address the issue of import tax rates on textiles and garments.

The Minister told the traders to wait for the ministry’s final position on the matter within a week, warning that demonstrations by the traders are not a wise option when discussions are ongoing.

By the end of the meeting, the government position still remained, that imported textiles and garments, which cannot be sourced locally will incur a 35% import duty. These, according to the Ministry, account for 90% of the textile and garments imports.

The imported textiles and garments, which can also be sourced locally, will be taxed at 35% of the value of an item, or 3 dollars and 3.5 dollars respectively, whichever is higher.

The government has also drawn a list of items, which comprise the 10% on which the new tax policy will be administered, and  PSFU is reviewing the list before giving its advice.