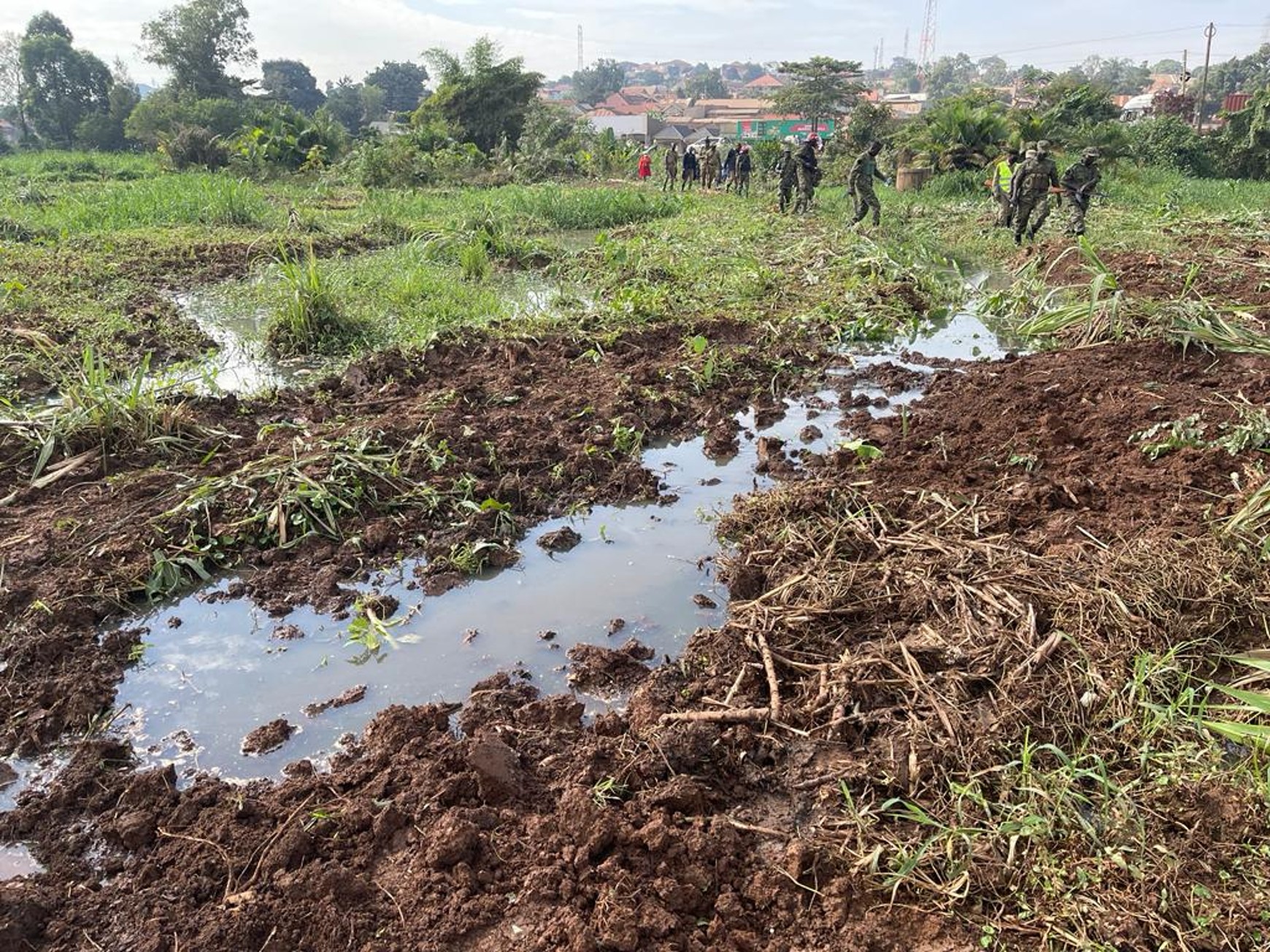 The National Environment Management Authority (NEMA) has today undertaken a joint operation with the Ministry of Water and Environment, the Environment Protection Police Unit and sister security agencies to restore Lubigi wetland in Kampala.

A total of three people were arrested in the exercise and several others are on the run. The suspects will be prosecuted in court.

According to NEMA, today’s activity also included the removal of alien plant species which had been introduced into sections of the wetland, including the cutting down of eucalyptus trees that are known to degrade the ability of wetlands to hold water.

The Lubigi wetland had been severely compromised by illegal encroachment in the form of settlement, agriculture, dumping of marram and draining. It is the largest wetland serving Kampala City and the neighboring districts to the North and Western Parts of the city.

“This wetland system serves as a critical water catchment area for the central region and is a major source of water for the water-stressed areas of the cattle corridor in Central Uganda. Rainwater from the northern and western suburbs of the city such as Bwaise, Kisaasi, Kawaala, Busega, Mengo and surrounding areas drains via underground aquifers and surface run-off, into the Lubigi wetland. The wetland is also a unique ecosystem that supports over 200 plants, insects and bird species, including the national bird, the Crested Crane,” NEMA says in a statement.

Wetlands are an important part of our ecosystem because they are a habitat and breeding ground for some species, they perform hydrological functions such as regulation of water quality, reduce downstream soil erosion and aid in flood control by storing excess water during storms.

Despite the above important ecological functions, wetland coverage in Uganda declined from 15.6% in 1994 to 8.9% by 2017 at a rate of 2.5% per year. Therefore, unless radical measures are instituted immediately to restore the integrity of Uganda’s wetlands, coverage may reduce to 1.6% by 2040. In addition, the third National Development Plan (NDP III) set a national target of increasing national wetland cover from the current 8.9% to 9.57% over a period of five years.

The Authority has promised to close down all illegal taxi parks/stages along the Busega-Mityana road. With help from UNRA, NEMA says the road reserve will be adequately demarcated and barriers will be put in place to prevent future re-encroachment.

“Today’s operation is the first of several others that have been planned to apprehend persons who illegally settle in wetlands and/or destroy critical ecosystems. We once again appeal to all those affected to voluntarily leave wetlands and seek advice from responsible lead agencies on how best to sustainably utilise natural resources. In addition, we also caution against the consumption of foodstuffs grown in urban wetlands such as Lubigi, because they are laden with heavy metals which are dangerous for human health,” the statement from NEMA adds.