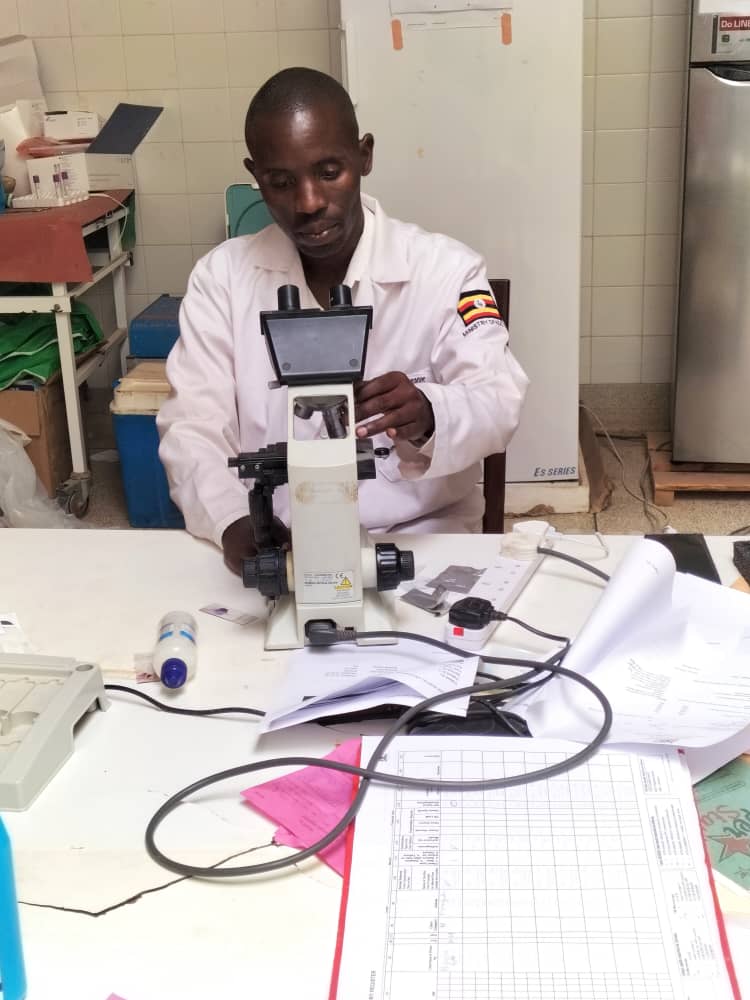 Rwakoojo Blair Anthony is testing samples at the hospital’s lab. He believes leading a quality life is possible with the right support and treatment

In the first year of the covid-19 pandemic, the global prevalence of mental health conditions including anxiety and depression increased by a massive 25%, according to the World Health Organization (WHO).

Forty-one-year-old Rwakoojo Blair Anthony, a senior Laboratory Technician at Kambuga Hospital in Kanungu district south western Uganda is among the people living with a mental health condition which escalated during the covid-19 pandemic. He is giving his community lifelines.

A single father of two, Rwakoojo has been living with a mental illness for over twenty years. “I first developed the personality disorder when I was still in high school but after seeking medical attention then, it kind of disappeared and since then I have been living a normal life like every other healthy person”, says Rwakoojo.

However, when the covid-19 pandemic struck, a lot changed and Rwakoojo could not survive the wave of relapses that occurred due to the pandemic scare. “I didn’t contract covid although I was actively involved in the frontline work and up to now I don’t know what triggered my sickness but I was so scared of contracting the disease since we were so exposed”, added Rwakoojo.

Despite the personality disorder, Rwakoojo was also diagnosed with depression.

According to the Centre for Disease Control (CDC), early adverse life experiences, such as trauma or a history of abuse are some of the most common causes of mental health conditions. Furthermore, the organization lists; experiences related to other chronic medical conditions, such as cancer or diabetes, biological factors or chemical imbalances in the brain, use of alcohol or drugs, and having feelings of loneliness or isolation among other causes of mental disorders.

When he developed a severe illness, Rwakoojo says he first sought treatment at Kambuga hospital but that did not bring complete healing. “When my condition continued to worsen, I sought counselling at our hospital (Kambuga district referral where he works) but I think because there is no department for mental health treatment, a lot did not change”, noted Rwakoojo. “I decided to go to visit Mbarara Regional Referral hospitals for a checkup and realized that things were not well with me at all”, he added.

In Uganda, like most African countries, mental healthcare was already weak before the epidemic. The many restrictions imposed to slow down the spread of the virus, like physical distancing, lockdowns, closure of “non-essential” businesses, and travel restrictions – also led to increased levels of stress, anxiety and depression.

According to a recent report by the Ministry of Health –Uganda and Uganda Counselling Association, about 14 million Ugandans live with mental disorders. This is attributed to the shocks caused by the covid-19 pandemic, the economic drop, and depression among others.

Rwakoojo revealed that “because of the scare, with the help of my mother, I also decided to visit Mulago National Mental Referral Hospital for a further checkup but was later referred again to Mbarara saying that they would manage my condition.” He says that a thought came to his mind that maybe they wanted him to feel a little stronger.

“I was admitted for close to six months and put on haloperidol medication but I got out better than I was and somehow relaxed and was ready to resume work”, noted Rwakoojo. However, he says that the psychiatrist advised him to take more rest to gain recovery. “Since I had been granted sick leave I decided to follow my psychiatrist’s instructions and went home to Rukungiri for another three months which was not even so long until I felt more relieved”, said Rwakoojo.

Upon discharge, Rwakoojo says he also concentrated on his home development, attending to his farms, and banana plantations, bought land from some of his savings and planted more eucalyptus trees, among others and has now resumed his duties.

Asked about how many people he employs back home, Rwakoojo noted that “I employ over 10 casual workers on my projects and I am grateful to them because they treated me well and gave me good company which gave me relief.” He is hopeful that this will help rebuild what he lost during his sickly period and the workers will also be able to develop their families and welfare.

Rwakoojo who has now resumed work also volunteers at Kambuga hospital in his free time to interact and share his mental health experiences with people living with mental health conditions and about treatment.

Asked to send a message to anyone battling a mental health condition, Rwakoojo said that “I believe that any illness once realized, and sought medication for, one can recover completely or even learn to live with the illness like I am ready to recover or live with mine if it insists.”

However, he advised the patients that whenever discharged, they should always return for a follow-up consultation because it helps them to know their status. “I wouldn’t have gone through all this if I had regularly gone for checkups because I thought my condition had gone for good”, asserted Rwakoojo.

Jenner Karungi, Rwakoojo’s mother and caregiver revealed that she was shocked to see him instead in a worse condition than he was before. “After all these years, I thought ‘Koojo’ (as they call him at home) was completely recovered but I was shocked when I got a call from his workmate that he was sick,” she says. “But I thank God who has always fought my battles that he is now fine and promised to always do checkups regularly because it was a challenging moment for us even when restrictions on movement were so tough” added Karungi.

According to Racheal Owomugisha the Kanungu district Psychiatrist Clinical Officer, whether before or after covid-19, some of the causes of mental health conditions have stayed. “The leading causes of mental illness especially in Kanungu district have been substance abuse because people resorted to drinking alcohol, smoking and using illicit drugs due to the many restrictions, death shocks, prolonged worry, loss of jobs, lack of self-control, poverty and anxiety.”

However, Racheal believes that if people sought early treatment, the percentage of mental illnesses would reduce. “The government has also rolled out strategies to fight the conditions like deploying doctors in every hospital across the country but I also strongly advise people to stay away from substance abuse and illicit drugs to keep away from mental health illnesses,” added Racheal.

Asked whether there are any strategies to stem the fight against mental illness in Uganda, Dr Hafsa Lukwata the Focal Person in the Ministry of Health noted that “there are pillars activated every time there is an emergency and when covid-19 was detected, many were set up to detect and manage mental health cases across the country.” “We also have a set of messages we have written being disseminated about mental health and depression and many more strategies are there and emphasized early treatment once one develops signs or symptoms of a mental health condition”, added Lukwata.