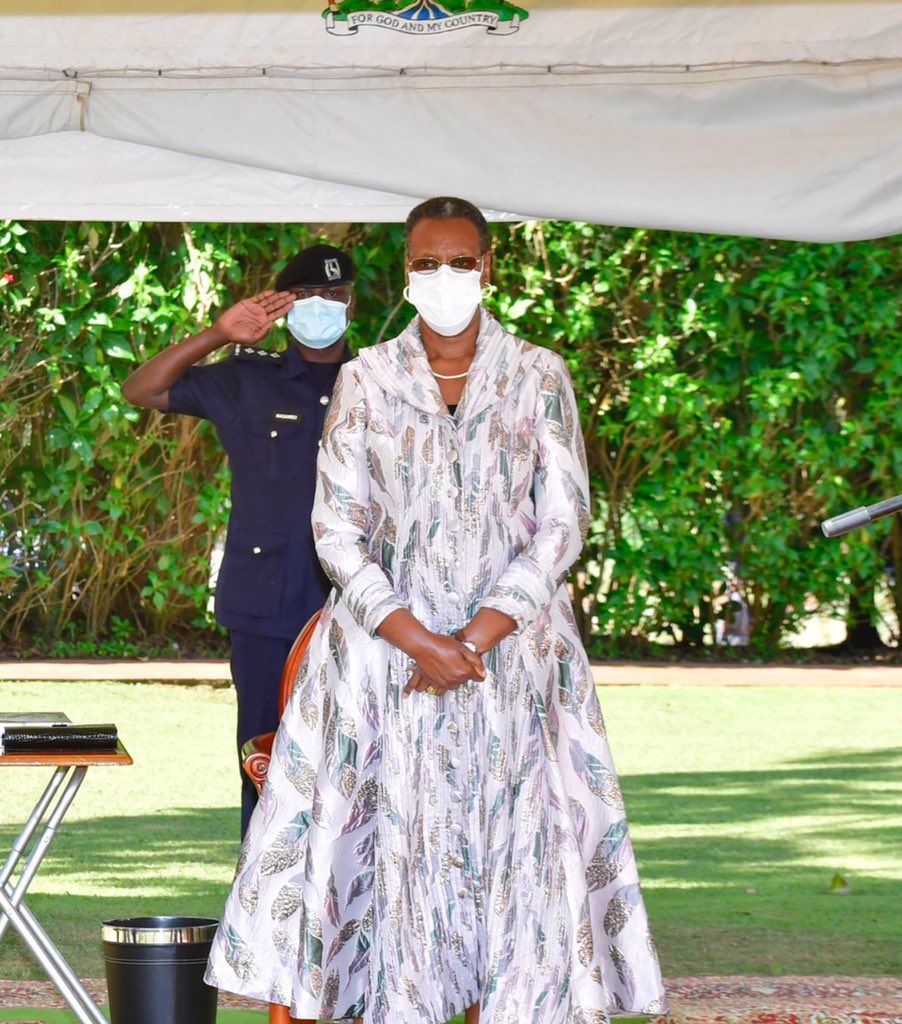 Your Excellency the German Ambassador to Uganda, The Hon. Minister of State for Ethics and Integrity,

The Heads of Agencies from the Inter-Agency Forum

I am happy to be with you today and I want to welcome all of you to your national house- State House, Entebbe.

I was asked in November last year, to spearhead the Ambassadors for Integrity Campaign as the National Champion, a role I gladly accepted because it is my duty to add my brick to the building of our country by fighting against the cancer of corruption in this beautiful land God gave us. So allow me to welcome you in that capacity to this occasion when we launch the 2021 Anti-corruption Campaign.

I in particular express my sincere gratitude to the German Ambassador to Uganda, for making the time to join us in this battle for the soul of our nation.

The fight against corruption has been the commitment of the NRM Government right from 1986. Government has since then, enacted notable laws to detect and curb corruption, while establishing several Anti-Corruption Institutions represented here today.

Inspite of the several measures that government has put in place, the public’s level of perceived and actual corruption has remained high in our society.  This tells us that we must go beyond the anti-corruption legal and institutional frameworks. We must strategically engage the citizenry, solicit their participation, and ensure that they own this campaign against corruption.

Therefore, the audience here today composed of most anticorruption agencies reflects the linkages necessary to fight this vice.

Such fora are an opportunity to reiterate the need to strengthen our linkages amongst and with both state and non-state actors in the fight against corruption.

Whereas the public may look at corruption as a government problem, they too do participate in fueling this evil because either they pay the corrupt officials or they collaborate with corrupt lawyers to get government compensation for what they don’t deserve. But if they could play the role of the watchdog, the public could detect and trigger investigations into allegations of corruption. This highlights the importance of shared responsibility in the fight against corruption.

In His wisdom, God created the universe for each element to be interdependent on the other. This principle of interdependence holds true for socio-economic transformation and the fight against corruption.

Just like government cannot walk alone in transforming society, our efforts to fight corruption cannot be concentrated in government alone.

It is for this reason that this year’s Theme for the 2021 AntiCorruption Campaign which is about, ““Promoting Active Citizen Participation in Social Accountability” becomes most relevant. Such a strategy is not only timely but resonates with two related tasks among the five that His Excellency the President assigned to his Executive: at the swearing-in of the current Cabinet. These two tasks are, “patriotism” and “fighting corruption”

It would also be good to see the involvement of the children and youth who form seventy-five percent of our population participate actively in citizen social accountability. One of the reasons is that they are quite susceptible to misinformation and speculation.

Whereas awareness and education of the public about corruption plays an important role in the fight against corruption, but if not done with and in an atmosphere and attitude of moderation, such efforts stir up undesirable effects. Some of such effects include mistrust and pessimism; and ultimately, negative energy about everything. And young people; sometimes, because they are limited to how much public information they can access; they are most vulnerable to all sorts of misinformation and speculation.

This gets so bad to the extent that even when there is a lot of good going around, the waves of negative energy keep on drowning out the praises of celebration of the accomplishments. So, I want to challenge us today that we champion both the fight against corruption while at the same time giving people hope that all is not gloom and doom.

The Zero Tolerance to Corruption Policy, (ZTCP), which you have begun implementing, seeks to further strengthen collaboration and partnership among all stakeholders, for the effective implementation of anti-corruption measures. I see here Religious Leaders, Cultural Leaders, the private sector, Civil Society and our Partners in  Development, whom you have partnered with.

I have been informed that these Stakeholders are represented on the Zero Tolerance to Corruption Policy Steering Committee, which Bishop Joshua Lwere heads. Through this partnership and building synergies, I am sure that we shall achieve an effective joint action not only against corruption but also restoration of hope to our people. Ladies and gentlemen, this is our country and the only one we will ever have and call home.

Bishop Lwere has informed me about the upcoming Strategic Intervention on Enhancing Social Accountability by mobilizing the citizens to monitor service delivery at Parish, Sub-County and District level, while supplying them with information about the funds released for Government projects.  I am in full support of this intervention.

I have always been guiding my technical people in the Ministry of Education and Sports that it is important for all of us to get to know what is happening in the Ministry.

It is important for us to know what we intend to do, why we intend to do it, when we plan to do it, and how we shall do it. And still come back and report to all of us what has been done and how much it cost to get it done.

This approach is important because perceived corruption is sometimes a result of lack of transparency with the information we have or the work we are doing. When people are denied information, everything is left to speculation.

Even as I listened to the Minister of State for Ethics and Integrity’s Report about your achievements in the fight against corruption, since December 2020, I eagerly await the outcome of this strategic intervention of citizens’ active participation in monitoring service delivery and look forward to receiving progress reports from this Inter- Agency Forum gathering.

I have noted the challenges you face, particularly insufficient funding. I hope and pray that the Minister of State for Ethics and Integrity will take up the matter of Government funding, with the relevant authorities.

As I conclude, allow me on behalf of the Government of Uganda to express my sincere appreciation to the Ambassador of the Federal Republic of Germany, for the support provided to Government through GIZ, particularly in fighting corruption.  I look forward to continued partnership with GIZ and the other Partners in Development, you represent in this meeting.

Finally, I implore all of you listening to me, to please walk the talk, this is the only way we shall win this battle. If each one of us can do the right thing on their desks, in their dockets, the multiplier effect of these honest acts will have a big impact on the country. Integrity is who you are when no one is looking, a person of integrity is the same in private and in public during the day and at night.

I have no doubt that as we get a critical mass of people who are doing the right thing and who believe that it is possible to prosper without stealing and it is important to value the peace in your heart even when the going is hard knowing that, that is the first building block for prosperity.

Experts say that it takes twenty percent of a society believing anything in order to influence, the other eighty percent and even lead them in a given direction. Let us commit to first of all change before we can see the change that we want to see in our motherland.

It is now my honor and pleasure to:

Thank you and God bless you!