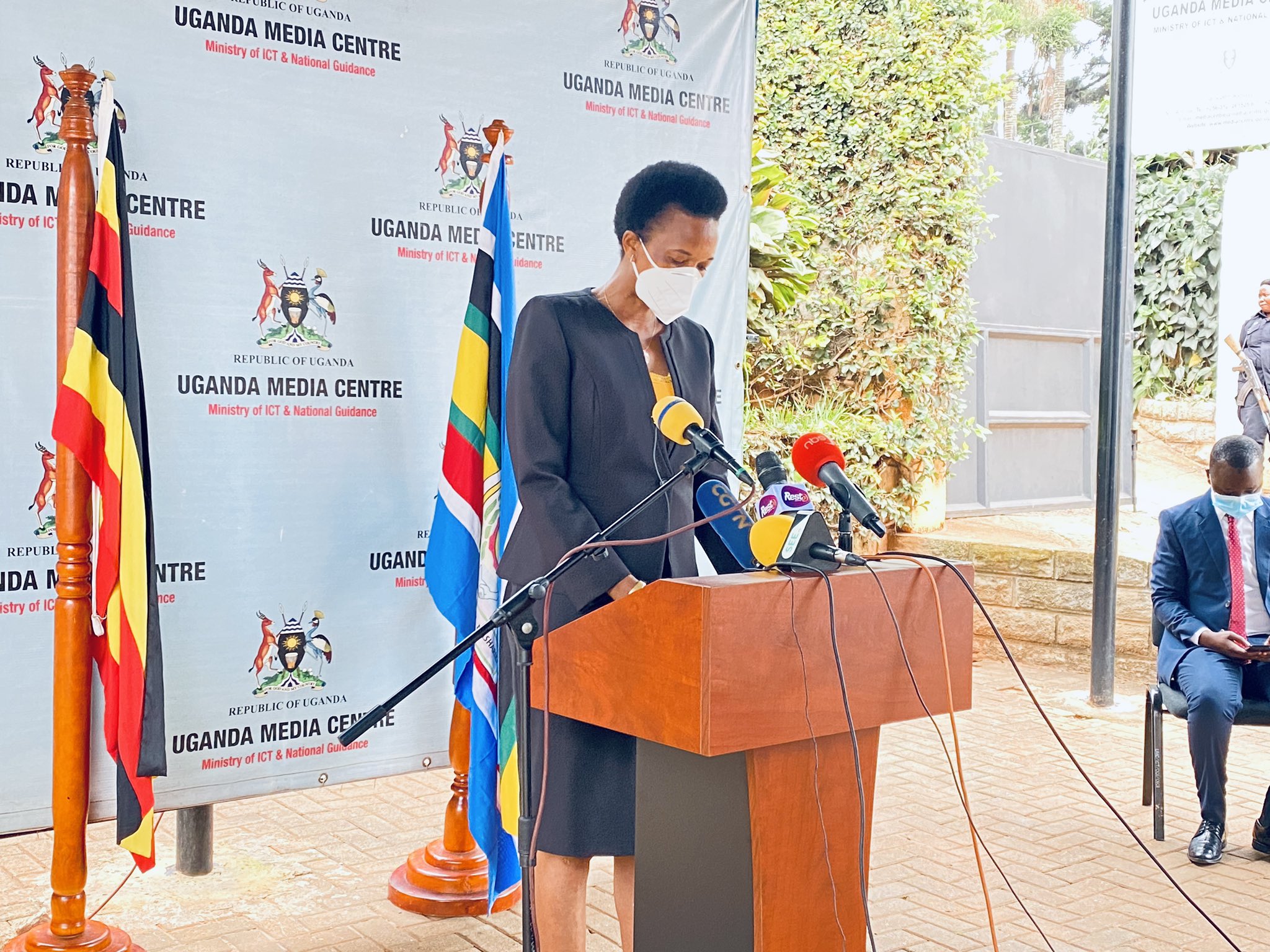 The Ministry of Relief, Disaster Preparedness, and Refugees has revealed that over 1 million Ugandans have been affected by ongoing heavy rains that have hit different parts of the country.

The rains started in April 2020. According to Hon. Esther Anyakun (MP) the State Minister for Relief, Disaster Preparedness, and Refugees, currently, the heavy rains received is characterized by violent windstorms, hailstones, and lightning strikes that have destroyed crops in the countryside claimed lives and led to a rise in water levels in all rivers and lakes in the country causing floods and displacement of communities.

She told the press at Media Centre in Kampala on Tuesday morning that some of the districts affected by this phenomenon include those along the shores of lakes, like L. Albert; Buliisa, and Ntoroko. L. Kyoga also burst its banks, affecting and displacing communities in Nakasongola, Serere, Kaberamaido, Kabelepyong, Dokolo, Apac, Amolatar, Kayunga, and Buyende.

The Minister added that communities on the shores of L. Victoria are suffering the same fate, notably in the districts of Buikwe and Wakiso, with Bussi Islands, Entebbe municipality, particularly along the shores including Garuga and Mulungu in Busiro that experienced floods. Kampala City has equally suffered floods, especially in communities along the shores of L. Victoria that include; Bukasa, Mutungo, Gaba, Munyonyo.

Hon. Anyakun says that in Nakasongola district, 22 out of the 25 landing sites have been affected with a population 1,762 people. Five Government schools (primary) and one health unit Lwampanga H/ C Ill Maternity ward building were submerged by the floods. Approximately 103 km of the district road network have been affected through sections of the road are either washed away or cut off. Also overrun by floods are a number of water sources and sanitation facilities in the district.

In Kayunga district, floods have displaced over 7,965 households from the five parishes of Namalere, Ntima, Galiraya, Kirasa and Kasokwe. This is pausing a major food security risk to the households amidst deteriorating hygiene and sanitation as most latrines have been submerged.

“Moreover, amidst the increasing cost of accessing medical services due to lack of emergency transport system, limited outreach programs, and poverty. As a result, there is a reduced rate of attendance of antenatal care (ANC) and Antiretroviral treatment (ART)” she said.

In Eastern Uganda, Namalu Bridge, connecting Bulambuli Nakapiripirit was completely destroyed by floods on the 9th of September 2021, and several flood episodes were reported from the Eastern district of Butaleja.

During the same period, River Nyamwamba in Kasese district burst its banks for the 3rd time and flooded into people’s homes bringing the total number of the displaced households to 413 with a population of 2,063 in the displacement camps of Muhokya, Kyambogho Primary School, Kathulhu Church of Uganda Kasese humanist.

In the mountainous areas of Elgon, the situation is worsening with Bududa District recording numerous mudslides in Bulucheke Sub County in the afternoon of Thursday, October 14, 2021, that destroyed crops in gardens, water sources, road networks, and displaced households in 24 villages.

On the 19th of September 2021, a landslide affected eight (8) parishes in Sironko district, displacing 273 households with a population of 1,215 people. 70 of the houses were soaked in water and 203 totally collapsed with additional 59 households at very high risk due to cracked walls.

In Rukungiri district, banana plantations were destroyed in the 8 sub-counties of Ruhinda, Nyakagyeme, Nyakishenyi, Nyarushanje, Buyanja, Buhunga, and the Southern division affecting 2,963 households. strong winds also blew the roofs of buildings in Nyakagyeme and a classroom block in Kakamba primary school in Buhinga Sub County.

Lightning hazard is also greatly affecting the Country during this period with several deaths recorded in the western Uganda districts of Kisoro (7), Rubanda (3), Kanungu (2), and in northern Uganda, Alebtong district (5) members of one family.

“It should be noted that the frequency of lightning strikes tends to increase at the onset of the rainy seasons and therefore, preventive measures should be emphasized to the members of the public. Roughly over 1,000,000 have been directly or indirectly affected by the current condition, with some sleeping in churches, schools, and other public places” she said.

The rains are still continuing according to the current weather outlook issued by the Uganda National Meteorological Authority for the month of October. The rains will be heavier in this month of October with the Eastern, Western, South Western, and Central segments of the Country expected to have normal to above-normal rainfall during the outlook period while the rest of the country is expected to receive moderate rainfall with some dry spells expected in Karamoja sub-region.

Since the impacts of the current floods and heavy rains in the different regions in the country appear to be cumulative, continuous assessments will be done by the district disaster management committees, supported by the

Department of Relief, Disaster Preparedness, and Management in order to update our inventory and inform response strategies and strengths.

The Government is working closely with all the affected district Local Governments through their District Disaster Management Committees to manage and provide the families with initial coping mechanisms.

According to the Minister, the Government will continue to send early warning messages to the communities in disaster-prone areas across the country to inform them that current heavy rains are still on. “The communities should remain alert, and take early action in response to the issued early warning messages. Communities living in high-risk areas such as mountainous and, flood prone are advised to move away from the steep slopes of the mountains, go and stay with host families in safer zones” he added.

The government has developed a relief distribution plan for the affected districts, and with support of the UN World Food Program, 8 trucks were provided to compliment this ongoing distribution of food and non-food relief items that include maize flour, beans, blankets, jerricans, basins, mosquito nets, tarpaulin. Mobilization of more relief items is ongoing through partners.

For a long-term solution to managing disasters in the country, with the support of UNDP a Disaster Risk Management Plan is being developed. The DRM Plan covers the medium-term and long-term interventions while emphasizing functional District Disaster Management Committees, District Emergency Coordination, and Operation Centers at the local level of government to ease disaster preparedness and response.

Uganda is still in the fight against Covid- 19. Communities in displacement camps are particularly encouraged to continue observing the Covid- 19 control measures, standard operating procedures, and guidelines from the Ministry of Health and more importantly, secure vaccination to minimize the risk of succumbing to the effects of multiple and concurrent disasters in the country.