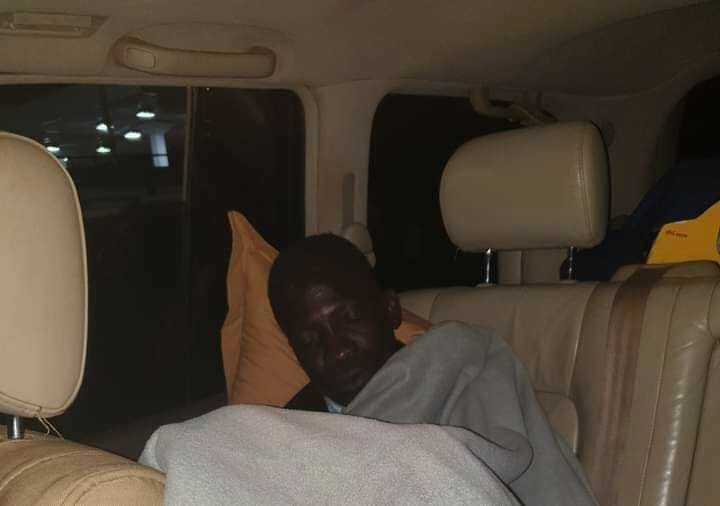 The opposition National Unity Platform, NUP Party President Robert Kyagulanyi Ssentamu and his campaign team spent the whole of Thursday night sleeping in their cars by the roadside after they were blocked from traveling to Kyankwanzi via Hoima.

Kyagulanyi says they were traveling to Kyankwanzi through Hoima district but the road was blocked by police which said it is under construction.

“We decided to instead spend the night in Migera but the police under DPC Patience Namara and the OC, Byaruhanga have ordered all hotels not to host us. We’re now stuck and spending the night on the roadside. The DPC is telling us she will only allow us to stay in her district until 6:00 a.m in the morning. You can imagine being treated like this in our own country” Kyagulanyi lamented.

On Thursday, police and sister security agencies blocked the NUP candidate and his team from accessing their scheduled campaign venue in Masindi.

Kyagulanyi however said the energy and vibe they witnessed in the people of Bunyoro land (Masindi) showed the entire nation how the current generation is ripe for change and that they are achieving this once and for all.

“Blocked from the main roads, blocked from reaching the towns, people are constantly harassed, beaten and prevented from coming to our campaigns by the military, but see what Buliisa is saying” He said.

On Thursday, the EC chairperson Justice Simon Byabakama warned the police and sister security agencies to stop blocking presidential candidates from accessing campaign venues as long as they are on time and adhering to the SOPs.

However in many areas where Kyagulanyi has been blocked, the police say he was not adhering to the SOPs by attracting crowds of people, making is easy for COVID-19 to spread among communities. According to the EC guidelines, each candidate should meet only 200 people, per campaign meeting, something several opposition candidates have completely ignored.

In some other areas, police has argued that candidates arrive late for their campaigns. The EC guidelines indicate that campaigns must stop at 6pm on each day.