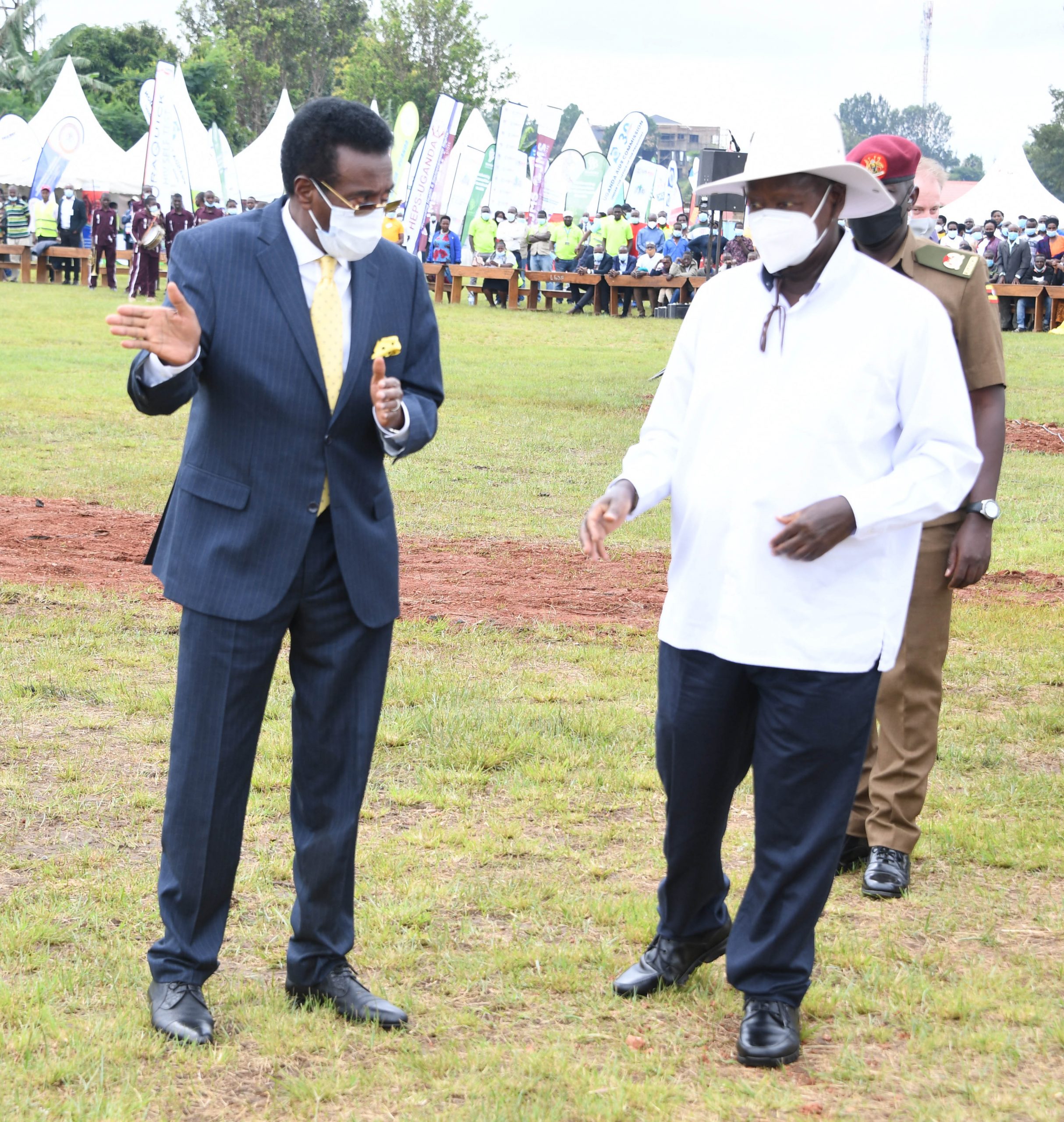 President Yoweri Museveni has said prevention is the best way of fighting HIV/AIDS.

“It’s very easy to avoid. It’s not like in the past when you could get AIDS through accidents, mother to child transmission. Currently, you can survive all that due to the various interventions we put up,” the President said.

Gen. Museveni made the remarks during the World AIDS Day commemoration that was held in Rukungiri on Thursday, 1st December 2022. This year’s celebrations ran under the theme: “Ending Inequalities Among Adolescent Girls, Young Women and Boys”.

He said when one contracts the virus, his/her potential is cut off, thus rendering them as ‘Persons With Disabilities (PWDs)’.

“The best thing for AIDS is prevention. Avoidance is the best solution because even when we put you on medication when you are infected, there are things you cannot do like joining the army. Even if we keep you alive by putting you on ARVs, your potential is cut off,” said H.E. the President who over the years has been recognized as a champion for HIV/AIDS fight.

“We don’t want to cut off the potential of our people due to HIV. When you get sick, you will not be able to fully meet your potential. This is medical; I have seen this in the army, some people on medication collapse during recruitment exercise,” he added.

The Head of State on the other hand advised the infected to always stick to medication if they want to stay alive.

“Don’t discriminate against people living with HIV/AIDS, they can do many things that other people can do,” he said, before commending the United States of America government and other development partners for the support they accord to Uganda in the fight against the scourge.

“If donors continue supporting our interventions, then that is good but if they are unable to do so, we can suppress other things and fund our people,” Mr Museveni stated.

The President also tasked the people of Rukungiri to stop encroaching on the wetlands. He said those who are carrying out activities in the distinct ecosystem should willingly withdraw.

“When I was coming, I saw that there was encroachment in the wetlands. You should get out willingly before government forces you to do so. We want to install solar powered water pumps near the wetlands so that we can have irrigated agriculture instead of rain-fed agriculture,” the Head of State cautioned.

The Minister for Presidency, Hon. Babirye Milly Babalanda commended President Museveni for always protecting the lives of Ugandans through his wise counsel and able leadership.

“For years you have been leading the fight to tackle this enemy. We celebrate your courage and heroism. In 2017, you launched the Presidential Fast Track Initiative to end AIDS as a Public Health threat in Uganda by 2030.  Five years later, a lot of progress has been achieved,” Hon. Babalanda said.

“We still have unfinished business to ensure that our people do not forget the fight against HIV/AIDS. Let’s us remain responsible and committed to ending AIDS in Uganda.”

The Security Minister, Hon. Jim Muhwezi said, “Your Excellency, I remember you came to this Stadium and told our people that HIV/AIDS Has no cure but is avoidable people took your teachings and they avoided it. You have done the same in teaching our people how to prevent Covid-19 and Ebola. We thank you very much.”

The Minister of State for Health in charge of General Duties, Hon. Anifa Kawooya revealed that 5.5 per cent of Ugandans are living with HIV/AIDS and out of this, most of these are women.

Hon. Kawooya however disclosed that the number of adult Ugandans living with the virus has significantly reduced from 6 to 5 per cent.

“I would like to thank Uganda AIDS Commission and other stakeholders for the job well done in combating the virus in the country,” she said.

The Director General of Uganda AIDS Commission, Dr Nelson Musoba said through the Presidential Fast Track Initiative (PFTI) for ending AIDS as a public threat in Uganda by 2030, they managed to come up with various interventions that have since enabled the country to register tremendous progress in combating the virus.

The UNAIDS “90,90,90” target means 90 per cent of all people living with HIV enrolled on treatment and 90 per cent of those on Antiretroviral Therapy will have an undetectable viral load by 2020.

Dr Musoba however noted that ending HIV by 2030 will require a strong and well-coordinated multi-sectoral response.

“Young people are with us and have contributed a lot in this fight. With concerted teamwork and support, we shall be able to achieve our goal.”

The UN Resident Coordinator in Uganda, Mrs Susan Ngongi Namondo called for a renewed push to scale down HIV infections in the country.

“Let us double our efforts, and increase finances in order to boost the gains so far achieved in the fight against HIV/AIDS,” Mrs Namondo urged.

“Your Excellency, your leadership in HIV response is recognized all over the world. You’re the first leader who realised that the fight against HIV/ AIDS needed political leadership and 30 years ago you created the first AIDS Commission in the world,” she lauded.

The Resident Coordinator also underscored the need to address the HIV/ AIDS information gap to create awareness about the virus.

“Young people face incredible pressure from their peers to engage in sexual activities and when it comes to contracting the virus young girls are four times more likely to be infected than boys. Some people are being left out, we must ensure that these vulnerable group also attain their right to health,” she said.

The Deputy Chief of Mission, United States of America-Mission Kampala, Mr William D Bent said government and other stakeholders should address the inequalities experienced by children and women living with HIV/AIDS, saying that this will help to overcome the discrimination and stigma faced by the vulnerable groups.

“Knowing your status must be a target for everyone. The time has come to act so that we put an end to HIV. We must also amplify the voices of people living with the virus,” Mr Bent stated.

“We have made remarkable strides since the first World AIDS Day commemoration 34 years ago.  These advances are largely based on the advocacy of people living with HIV, community-based organizations working in areas most affected by HIV, and collaboration and partnership between governments, public-sector partners, multilateral institutions, and non-governmental, academic, and philanthropic organizations.  The U.S. government, through the President’s Emergency Plan for AIDS Relief (PEPFAR), is proud to have been on the forefront of advancing HIV epidemic control for nearly 20 years,” he said.

“Uganda’s investment in the HIV response is critical to long-term sustainability.  Approximately 85% of Uganda’s HIV/AIDS response is externally funded, posing a major sustainability challenge.  Domestic resource mobilization is vital going forward and together as partners, we need to focus on finding more sustainable strategies– this means mobilizing additional domestic and external funding but also seeking efficiencies in the use of our current funding.”

The Deputy Chairperson of the Parliamentary Committee on HIV/AIDS and related matters also Luuka South County MP, Kisa Stephen tasked the youth to guard their lives jealously in order to avoid contracting the deadly virus.

“Parents should pay keen attention and adequately talk to their children. The government has been talking to Ugandans to embrace patriotism, it should also talk to them to embrace responsible parenting. Your Excellency, the fight against HIV in the world cannot be complete without mentioning your name,” Hon. Kisa said.

On behalf of the Inter-Religious Council of Uganda (IRCU), Bishop Patrick Tugume from North Kigezi Diocese called upon stakeholders to address the social systematic inequalities, which will enable all people including the vulnerable groups to have access to proven health services like HIV medications.

“I appeal to all leaders to work towards the defeat of enemies of human lives like HIV,” Bishop Tugume said.

The Rukungiri District LC5 Chairperson, Mr Geoffrey Kyomukama also thanked the NRM government under the able leadership of President Museveni for stepping up the fight against HIV/AIDS which has seen a reduction in the prevalence rate across the country.

“In Rukungiri we have 18,000 active cases who are on antiretroviral therapy (ART). Out of these, 63 per cent are females and 37 per cent are males. This indicates that this disease is around but we thank you Your Excellency for your tremendous efforts in fighting the disease,” Mr Kyomukama said.

On the other hand, about 1,000 people get infected with HIV every week and about 326 people die weekly due to AIDS-related deaths. Infections among young people (15 -24 years) accounted for 37% of all new HIV infections in the year 2021, with new infections occurring three times more among young girls compared to boys in the same period.  (MOH Annual estimates 2021).

The event was also attended by; the Vice President, H.E Jessica Alupo, Ministers, Members of Parliament, religious leaders, and HIV/AIDS Activists among other officials.