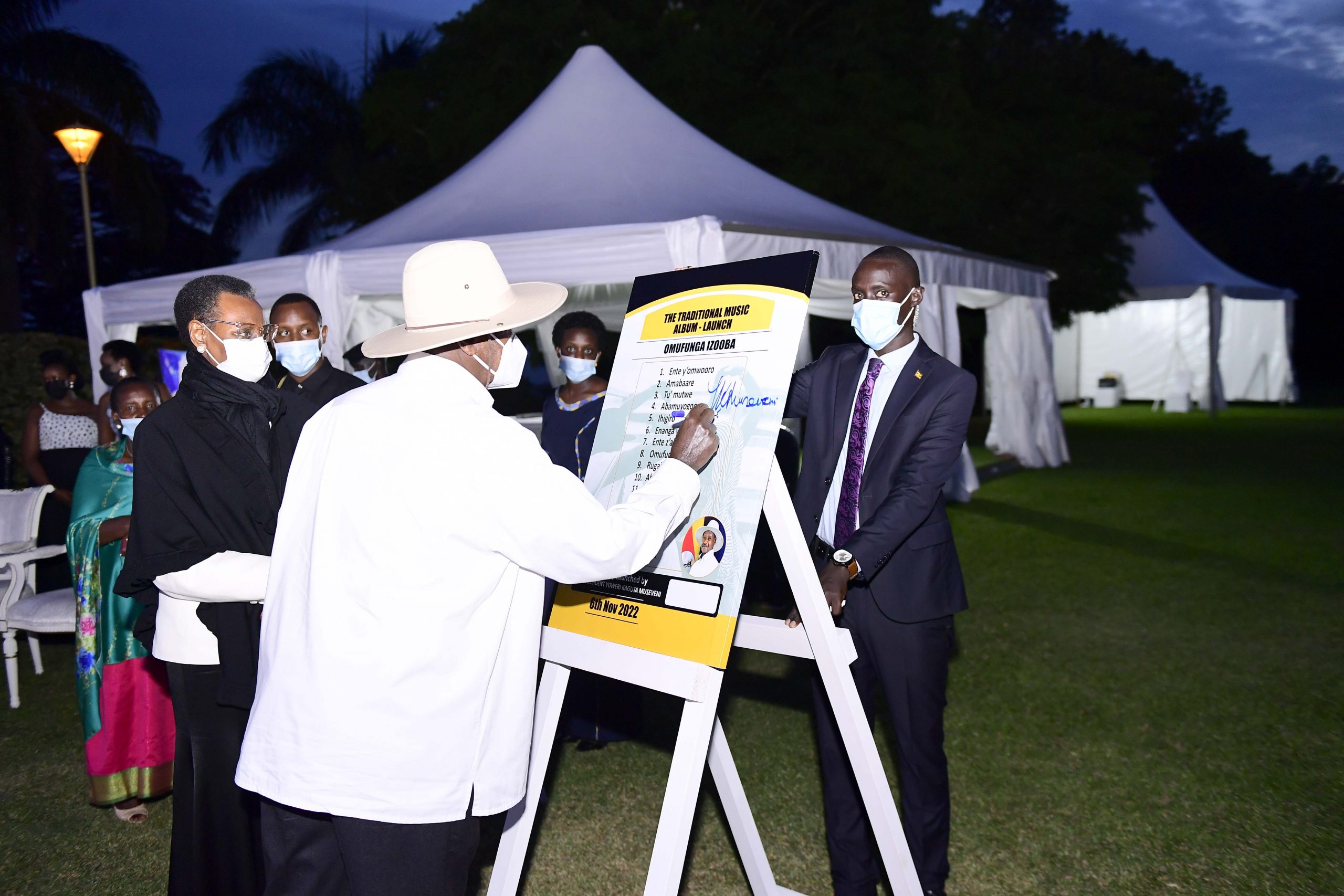 “Africa, stand up and be proud. We have everything from Wealth creation to rich language, to the strong culture of exogamy and strong patrilineal families and to the beauty of skin and hair. We do not have to ape anybody. Tetulina kwenyooma,” H.E Museveni said.

The President accompanied by the First Lady made the remarks while launching “Omufunga Eizooba”-a traditional music album on Sunday 6th November 2022 at State House, Entebbe.

H.E the President says the African population, currently at 1.3billion, has, within it, the most ancient portions of the human race, 4.5 million years old, and four nations according to linguistic classifications. The four nations are: the Niger-Congo comprised of the Bantus and the Kwa groups of southern Nigeria etc.; the Nilo-Saharan comprised of the Cushitic (Somali, Oromo, Nubians etc.); the Nilotics (Acholi, Langi, Luos etc.), Nilo–Hamitic (Iteso, Karamajong, Turkana, Bari, Kakwa, Masai etc.); the Afro-Asiatic (Arabic, Amharic, Tigrinya, Barbars etc.); and the small Khoisan (bushmen) of South Africa.

He noted that within each branch, there are clusters and sub-clusters with common words among groups that live thousands of miles apart.

“The former Minister of Finance of Nigeria, Ngozi, told me that in her Ibo language, that word means Love. You will know that that is what it means in Runyoro-Rutooro (in Uganda). Greeting in Zulu and Khosa goes like this: “Sauboona” — from the verb Kubona. In those dialects, Kuboona still means to see. However, in the dialects of Uganda, “to see” is described by newer words such as kulaba in Luganda, kureeba in Runyankore. However, the word kubona is still used in Runyankore to mean “to find something that has been lost,” the President said, adding that within that broad sharing of language, there are clusters that do not only share words but are actually mutually intelligible.

Some songs, according to President Museveni were resurrected by a young woman by the name of Maaga who was the core of his music group and always stayed near him at the High Command inner compound in Ngoma, Nakaseke.

“I debriefed her. Did she know the old songs, such as Bamagara, that I used to hear while young? She was assisted by our other supporters to resurrect these songs such as Kamuzaana, Kinkuhaire, Rwandare’s wife etc,” H.E Museveni said.

He added that ever since the bush days, he was recording these songs and his librarians were drivers who would lose some of them along the way but, to their credit, especially one called Byaruhanga, many were kept.

“Recently, Natasha aided by Ataho, managed to get from my drivers a total of about 119 tunes spanning the two Centuries ―from 1890s to the present. The music is excellent. This is music and not noise and I enjoy it so much. I see some groups making noise and calling it music. It is the main music in my cars when I am driving, plus some religious tunes and NRM songs. The content is excellent ―dealings with contemporary social or political issues. The language is so rich. I used the songs to get vocabulary to enrich our Katondoozi,” the President noted.

“I also thank my drivers for only losing some and not all of them. Africa is very rich in a heritage which ought to be preserved, minus the rivalries that existed between our people. Therefore, this foundation (Heritage Foundation) must do this work in all our regions,” H.E Museveni said.

The head of Heritage Foundation Mrs Natasha Karugire thanked the President and the First Lady for being at the forefront of promoting culture.

“Growing up, my siblings and I always listened to all songs that Mzee kept. We would be at the dining table with Mzee and mama and Mzee would often spontaneously break into singing some songs,” Natasha said.

“Mama for her part often told us traditional folk tales as young children and taught us the Do’s and Don’ts of our culture. Mama also introduced the singing that is now standard procedure at traditional giveaway ceremonies where songs describing the bride and counselling her and the groom are performed,” she added.

She however noted that amongst Christians, there is and has always been some kind of aversion to the old sounds in traditional music and Poetry.

“I have struggled personally with wanting to embrace the culture I was born into while always honouring the God I served and loved,” Natasha said.

On the other hand, President Museveni challenged Ugandans to use their rich cultural heritage and reject the pathetic Phenomenon of self-hatred that the Africans, especially the women, developed on account of the inferiority complex created by the colonial trauma. He said many of the songs inform us of the elements of beauty that is, for instance, appreciated by the Banyankore.

“You heard of Ngaanzi, the beautiful light skinned woman. However, in the hierarchy of beauty, it was Mbiindi or Nkyerengye, very dark- skinned women, that were appreciated even more. That appreciation of dark-skinned women was both aesthetic and also scientific,” Mr Museveni said, adding that, It is therefore psychologic sickness to resent the dark color which is very much treasured by the indigenous Banyankore-Bahororo.

The Bishop of North Ankole Diocese Rev Stephen Namanya thanked President Museveni through his book “Katondoozi” and the First Lady for promoting culture that Ugandans and Africa should be proud of.

The ceremony was attended by among others the Ministers; Frank Tumwebaze (Agriculture Animal Industries and Fisheries), Alice Kaboyo (Luwero Triangle), the United Nations Resident Coordinator Suzan Namondo, members of Parliament and service chiefs.

” I Have Never Been In Agreement With State Over Services To Do With Cyber Security” SK Mbuga
Ugandan deejay excited about Jay Willz collabo.
Advertisement