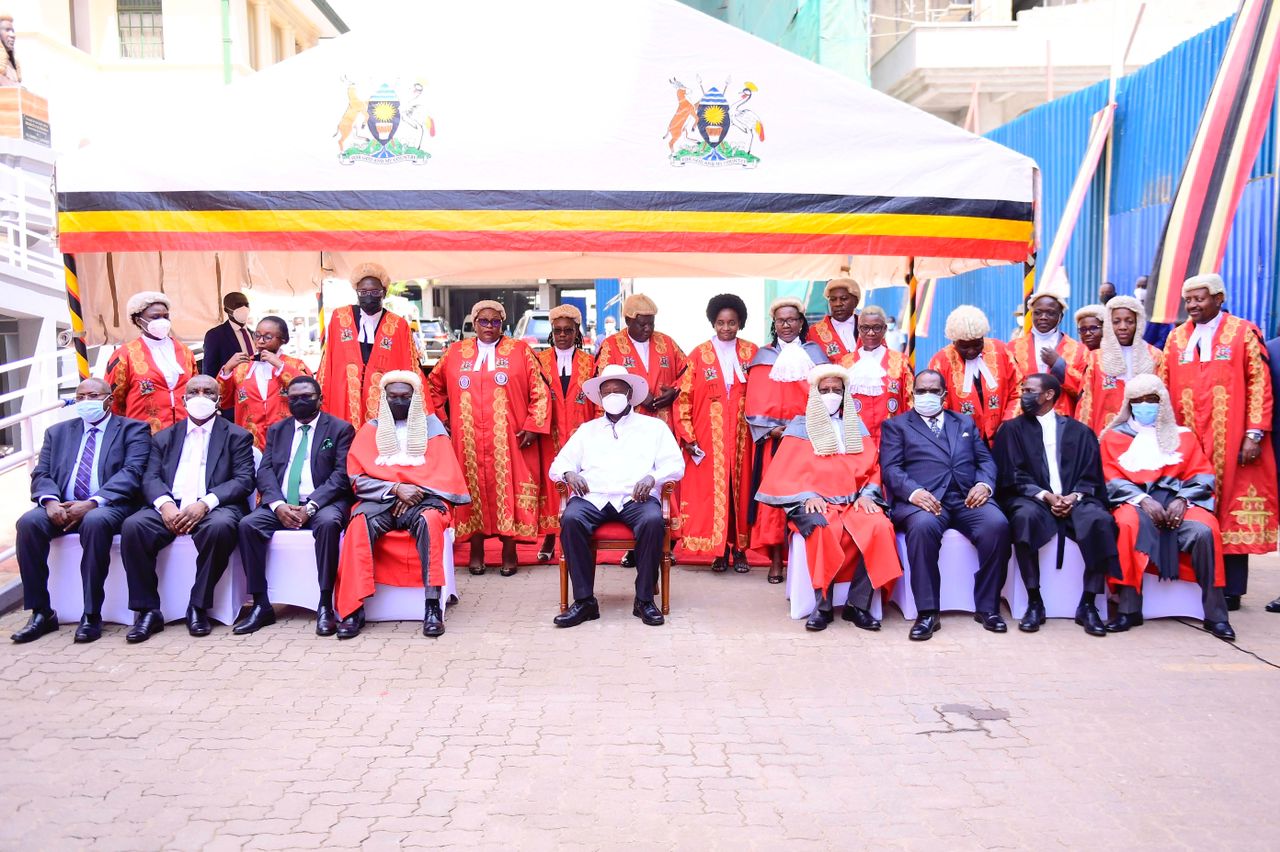 President Yoweri Museveni has said Uganda would not have developed if the citizens had not embraced the unity initiated by the National Resistance Movement (NRM) Government which the past governments had failed to achieve.
The President says it’s the NRM that brought politics of unity as opposed to tribalism and this has ensured peace and security throughout the country which previously was unheard of.
While officiating at the 5th Memorial Day of Chief Justice Benedicto Kagimu Mugumba Kiwanuka at the High Court in Kampala, under the theme: “Benedicto Kiwanuka – Reflections on the Independence of the Judiciary in Modern Times”, H.E the President described as missed opportunities moments where the educated class in Uganda, because of their tribalistic mindset, failed to agree for a common cause like getting rid of former President Idi Amin who ordered for the abduction and killing of former Chief Justice Benedicto Kiwanuka, the whereabouts of whose remains remain unknown.

He saluted Kiwanuka whom he described as a principled person, saying it was unfortunate that he ended up working for the wrong Government of Idi Amin.
“We salute Ben Kiwanuka but please Ugandans, the political class, let’s not lose new opportunities. NRM has been able to keep you together for 35 years now. That’s why we are moving. I appeal to you all, to consolidate and support this unity and approach of togetherness (Agali awamu gegaluma ennyama) loosely translated as “Teeth which are together can chew the meat better,” H.E Museveni said.

Today marks 50 years since the late Chief Justice Kiwanuka was last seen alive and five years since the Judiciary gazetted the Benedicto Kiwanuka Day in commemoration of the first Ugandan Chief Justice.
According to H.E Museveni, in 1971, despite the willingness of some neighbouring countries like Tanzania and Somalia who wanted to invade and get rid of Idi Amin, the British were determined to intervene and defend Amin because the political class in Uganda was not united and the same scenario happened in 1980 where after getting rid of Amin, Uganda People’s Congress (UPC), a small group by then, wanted to take hold of the whole situation and marginalise others which resulted into a new war.
“So, you can see the missed opportunities for a broad-based unity. We missed 1962, 1971 and 1980 and every time we met to get a broad-based position, a lot of trouble for the country resulted. For us when we came under the NRM, we said we needed a broad-based unity to bring everybody together,” Museveni said.

He hailed Chief Justice Kiwanuka for standing firm against the tribal chauvinism of Mengo, saying no to pushing tribal agendas and advocating for a national position.
“I worked with him in the Democratic Party (DP) although DP still had its sectarian side being mainly a Catholic party but at least on the national unity, they took a correct position and we should salute him for that,” the President said, adding that Uganda would not have had political problems if UPC under Milton Obote had not been opportunistic to try and please Mengo.
The President informed the gathering about the contribution of his constituency of freedom fighters as events unfolded leading to the total peace Uganda is enjoying now.
“Number one, we are the ones who removed the killers of Ben Kiwanuka. That should be clear because those who were killing these people who were they? They were the colonial soldiers, Idi Amin and group, and who removed them? The freedom fighters (NRM),” Museveni said, adding that it’s the reason Uganda is able to discuss how to move forward.

Other contributions of freedom fighters, according to H.E Museveni, were ushering in a democracy that eventually saw the first elections held that never existed for 18 years between 1962 and 1980; dismantling the sectarian system of religion and tribes which had paralysed Uganda and Africa, repairing the economy and ensuring total peace for people to build their lives. The other one was to financially support the Government structures including the judiciary.

The President reiterated his commitment to support the Judiciary to bring services closer to the people.
Chief Justice Alfonse Chigamoy Owiny-Dollo thanked the family of Benedicto Kiwanuka for giving Uganda their son who served as a politician, a private practitioner and Chief Justice of Uganda whom he described as “a principled man whose trademark sense of righteousness and commitment to the straight ways of justice” put him at loggerheads with the infamous Government of Idi Amin to an extent of taking his life.
“The man who took an oath to protect the life and properties of Ugandans (Idi Amin) took the life of one of the persons he took an oath to protect,” CJ Owiny-Dollo said.
The Chief Justice saluted President Museveni for his support to the Judiciary especially The Administration of the Judiciary Act 2020 and the enhancement of the Judiciary budget that has greatly improved service delivery of the Judiciary.

He told the President that the increment in the budget has seen an increase in the number of Chief Magistrates to 77 up from 42, more 16 Magisterial areas have been operationalised and the number of Grade one Magistrates has increased to 301 from 186 in the previous financial year. This, he said, has reduced the backlog of cases.

“For the first time, the Karamoja sub-region has a High Court served by a judge. They don’t have to rely on Soroti anymore. We have opened High Court in Tororo, Iganga, Luweero, Hoima and Rukungiri,” the Chief Justice said, adding that ten (10) more High Court judges will be recruited this financial year and more new High Court circuits will be opened in Nebbi, Bushenyi, Kasese, Kamuli, Kitgum, Lyantonde and Apac districts to enable easy access to justice.

“We believe that the Judiciary has changed a lot. We promise to support your agenda of the whole Government approach of ensuring that we build a strong state,” Hon. Mao said.
Mao, who is also the President of DP to which Chief Justice Kiwanuka belonged, reawakened the call to the Government of Uganda to get involved in finding his remains to be accorded a befitting burial.
“We would be happy like the Congolese even if we just received a tooth. We would at least be able to bury that tooth. The technology exists. There are now people in Argentina known as ‘forensic archaeologists’. We know roughly where he could have been buried but we need the support of the Government to get involved. It will be a glorious day, Your Excellency, when our country finally buries a man whose dream was to have a Ugandan state whose foundation is Truth and Justice,” Minister Mao said, adding that as the country reflects on how he lived, more reflection should be on how died, a manner which he said speaks more about the human rights and democracy in our country.

The President of the Uganda Law Society and East Africa Law Society, Mr Bernard Oundo and Deputy Chief Justice Richard Buteera also addressed the gathering.
Principal Judge Emeritus, Dr Yorokamu Bamwine and the late Justice Leticia Mukasa Kikonyogo who died at the age of 77 years were recipients of the Chief Justice Benedicto Kiwanuka Awards 2022 for their distinguished service with integrity in the Judiciary.

Chief Justice Kiwanuka was murdered during Amin’s administration on September 21, 1972, after he was abducted from his chambers at the High Court in Kampala.
Five years since the Judiciary declared an annual memorial lecture in his honour every September 21, every memorial lecture has been dominated by calls for respect for the independence of the Judiciary.
The colourful ceremony was attended by hundreds of guests physically and online.