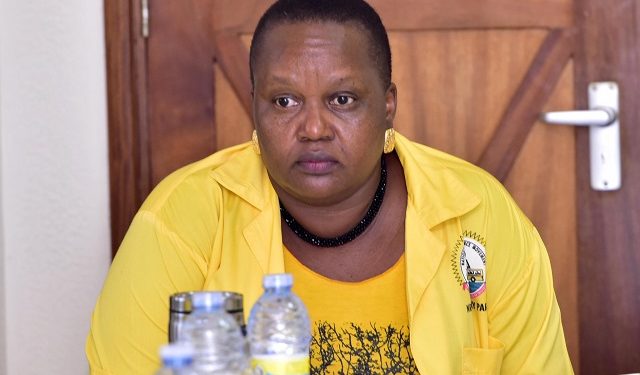 Florence Wanyenze Mutende, 8, a daughter to late James Shinyabulo Mutende has dragged Lydia Wanyoto to Court alleging that for 7 years she has not been allowed to allow the graveyard of her father.

Mr Mutende died on October 3, 2015 and was buried in Mafudhu, Sironko District.

In a civil suit number 395 of 2022, filed at High Court- Makindye family division, the minor suing by her next friend Jackline Nabulo (mother) further wants Court to revoke letters of administration of her father’s estate from Lydia Wanyoto.

At a time of his demise the deceased hadLydia Wanyoto- an NRM CEC member and Ms Nabulo as his official wives.

Ms Wanyoto who wields connection in government was granted letters of administration of Mutende’s estate in 2019, however, she is accused of neglecting and refusing to make any provision for the welfare of Florence Wanyenze, a minor and a beneficiary of the estate.

“Since the defendant was granted letters of administration on 21 January 2019 in respect of the-estate of the late James Shinyabulo Mutende is unlawful, a breach of trust, and thus invalid,” court documents reveal.

The minor is also seeking a court order directing Lydia Wanyoto to file within 14 (fourteen) days from the date of judgment, an inventory in respect of the estate of the late James Shinyabulo MutendePursuant to Section 234(2)(e) of the Succession Act, revocation of the letters of administration that were granted to the defendant on 21 January 2019.

“A declaration that the defendant’s act of blocking the plaintiff or other close relatives of the late James Shinyabulo Mutende from freely accessing the grave of the late James Shinyabulo Mutende alone or in assembly with others, in order to conduct prayers, mourning and other cultural, religious, spiritual and social functions to obtain closure, is unlawful and/or an infringement of the rights enshrined in Articles 29(1)(c), 29(1)(d), 37 and 45 of the Constitution, and is therefore invalid,” the documents add.

And therefore the boundary wall at the burial place in Mafudhu, Sironko district where the late James ShinyabuloMutende is buried be broken down or otherwise altered in order to give the plaintiff and other bereaved relatives of the deceased unlimited access to the said burial place for conducting prayers, mourning and other cultural, religious, spiritual and legitimate social functions.

Continue Reading
You may also like...
Related Topics:Featured, Lydia Wanyoto