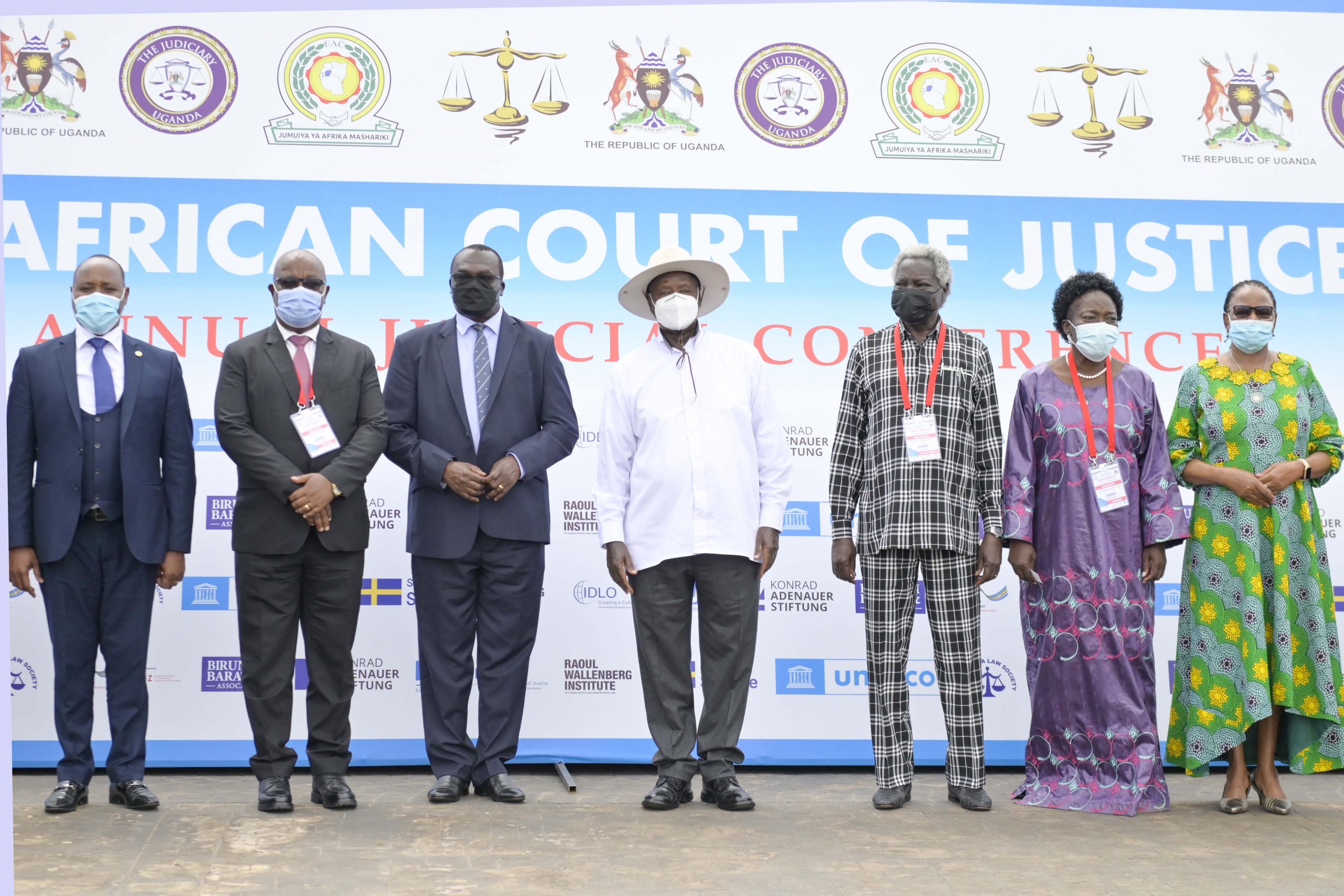 President Yoweri Kaguta Museveni has said that unless the society undergoes social economic transformation, the principles of justice will remain shaky.
The President made the remarks while presiding over the closure of the 2nd Annual East African Court of Justice Judicial Conference held at Mestil Hotel in Kampala on Friday, 28th October, 2022 under the theme, “Transforming Access to Justice in the East African Community”.
“We need social economic transformation to make these principles of justice in a modern way be on a firm basis rather than this shaky basis. But in order to do this the society must undergo social economic transformation,” H.E Museveni said, adding that Social Economic Transformation should be through Education for all (free education) and the full monetization of the economy.
“Let all children go to school and study for free. For me I am convinced, if all the children go to government primary schools, secondary and technical institutions, it will help the society to change,” He added, lashing out at individuals who think that education is a channel to make personal money.

The Conference aimed at stimulating high-level conversations and discussions on emerging legal and judicial issues including, emerging jurisprudence, issues affecting Courts and Court users and providing a platform for information sharing among judges, judicial officers and legal practitioners and other Court users in the region.
The President said Europe has changed because of socio-economic transformation.
“During the French revolution, there were four social classes which included the feudalist, peasants, middle class and working class but because of socio-economic transformation, now if you go to Europe today looking for peasants you will not get any.

What we have now is a two-class society which includes the middle class and the skilled working class,” Mr. Museveni noted.
The President further noted that the second channel for social economic transformation is business. “Learning the culture of producing a good or a service for sale,” he said.
On the issue of East African Integration, the Head of state noted that whereas the African Market is worth 3.4 trillion dollars, it is still low compared to other economies like Japan which is 4.3 trillion dollars, China (14 trillion dollars) and the United States of America (over 20 trillion dollars).

“So, this low level of GDP shows you the low level of mobilization. Because if we were mobilized, our GDP would be much bigger. Then soon we get into the problem of the market. Who will buy what you produce,” H.E Museveni said, adding that the Ugandan market will not be enough if all the people woke up and started producing, hence the need for a regional and continental market under economic and political integration.

He said the coming of Somalia on board will make the EAC stronger.
“This is the logic of Economic Integration. We are integrating in order to deal with the issue of prosperity through production of goods and services which need a bigger market,” H.E Museveni noted, not forgetting the issue of strengthening strategic security as the second element of Integration which also needs an integrated approach.
“If Africa works together, there’s no security issue we cannot work out. If we don’t act together, what is small becomes big. The issue in Somalia, DRC is very small but this can be dealt with through integration,” He added.

The President challenged Judicial officers to brainstorm on which matters that should be for integration, saying issues like land management should remain a state matter as it is a district matter in Uganda under the district land boards.
“Me as a wealth creator, what I want from East Africa is a market (integrating the market) then we can add other things carefully,” Mr. Museveni said. He congratulated the participants for coming to Uganda.

The 2nd Annual EACJ Judicial Conference attracted participants from the seven (7) East African Community (EAC) Partner States who include Chief Justices, Ministers of Justice, Attorneys General, Ministers in charge of EAC Affairs, Judges from regional and national courts, Heads of EAC Organs and Institutions, Members of Parliament, legal practitioners, members of the academia, representatives of civil society organisations, representatives of the private sector and the media.

The Ugandan Chief Justice Alfonse Owiny-Dollo hailed President Museveni describing him as the leading personality in the revival and expansion of the East African Community (EAC). He called upon the regional judicial officers to ensure a robust and effective judiciary to enable the East African Court of Justice (EACJ) to effectively exercise its mandate to sustain the rule of law in the community. He said Uganda will always make their contribution.
“We believe that with a strong Judiciary of each member state and of the community that sustains the rule of law will be in a much better position to sustain the principles and purpose of which we have come together as a community,” Chief Justice Owiny-Dollo said.

Hon Justice Nestor Kayobera, Judge President of East African Court of Justice who hails from Burundi, extended greetings from the President of Burundi and the chair of the East African community H.E Évariste Ndayishimiye. He commended President Museveni for championing East African Community Integration saying it will go a long way in helping the East African Court of Justice deliver on its mandate.
“You are such an unremittable high personality and a resource in our community. I’m sure through your words of wisdom, we will continue to break the records as our community in having an east African court of justice that continues to deliver with higher standards,” Mr Kayobera said.

The Ugandan Minister in charge of Justice and Constitutional Affairs Nobert Mao thanked President Museveni for promoting equality in the provision of social services.
“Your Excellency, you have promoted justice for all and equality of opportunity in Uganda. A country that cannot provide health care and free Education for all to its citizens cannot claim to be providing equality of opportunity. Nobody should fall under a certain line of life, the World Bank calls it below the poverty line. I believe in Uganda we shall reach a tipping point,” Hon Nobert Mao said.

He also urged the Judicial officials that while making their court decisions, they should not forget about the historical context of the societies they operate from. “Our traditional beliefs really do matter. The Judiciary does not operate in isolation.”
Meanwhile, the Director General of International Development Law Organization, Mrs Jan Beagle revealed that as a firm they enjoy the relationship they have with EACJ which has helped them to promote rule of law in East Africa.
“We should ensure that the law is more inclusive and accessible to all people. For example, in Uganda we have been supporting resolutions to overcome disputes thus restoring peace. We also provide legal services to vulnerable Ugandans and other East African members to access the legal assistance they need,” she said.

The Secretary General, East African Community (EAC) Dr. Peter Mathuki disclosed that as the Secretariat they have decided to take the community to the people so that they interact with them through different programs and get solutions to local challenges affecting the people.
“I want to assure you, Your Excellency, that we have the same objectives and one vision as a community.”
He also disclosed that as EAC Secretariat they have already engaged the President of Somalia H.E Hassan Sheikh Mohamud about the community and he gave them an assurance that they are in a process to join the bloc.
Following the conclusion of the conference, the East African Court of Justice shall hold its annual rotational court sessions during the month of November at the Commercial Court of Uganda premises in Kampala.
The event was also attended by the Chief Justice of Kenya, Her Lordship Martha Koome, the Chief Justice of South Sudan, His Lordship Chan Reec Madut, the Chief Justice of Burundi, His Lordship Emmanuel Gateretse, the president of the East African Court of Justice, Hon. Justice Nestor Kayobera, Attorney General, Hon. Kiryowa Kiwanuka among other dignitaries.