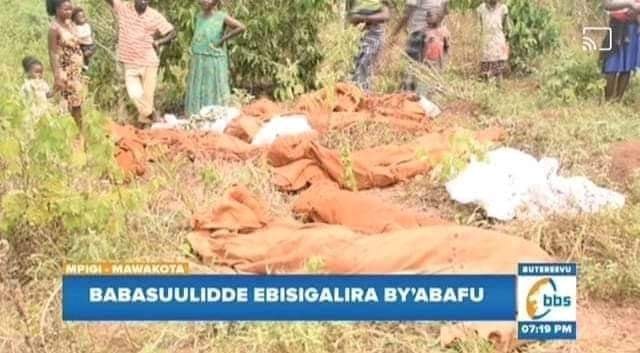 Police in Mpigi are investigating circumstances under which human remains of 15 (fifteen) deceased persons, that were exhumed from Kyengera Town Council on the 8/02/2021, by Aisha Kwagala, and transferred for reburial in Busese “A” village, Nkozi  sub-county in Mpigi district, were abandoned at the proposed burial ground at around 5:15pm, that same day.

This occurred after the owner of the land at Busese “A” village blocked the reburial process on the land.

Fred Enanga the police spokesperson says preliminary findings indicate that the exhumation and the transfer of the remains was controversial, since the family did not follow the right procedure of relocating the remains to their loved ones from Kyengera to another burial site. There was no agreement over the new burial site in Busese “A” village, and no court order authorising the exhumation and transfer of the remains.

“It was further established that after Aisha Kwagala and her team were blocked from reburying the human remains, they pretended as if they were returning with the human remains to Kyengera, but in a dramatic turn of events, dumped all the remains at Busese “A” village and drove off” Enanga said.

He narrates that members of the public should know that it is unlawful for one to disturb or remove the remains of the deceased persons, without the lawful authorisation from court or consent from the next of kin.

“We shall endeavour to track down the suspects (relatives) on both sides for disturbing the peace of the dead, after they exhumed and abandoned their bodies in the open. Our task teams recovered the human remains wrapped in backcloths with name tags that included; Nakamanya Kintu, Sam, Namusisi, Nsubuga x3, Nakabembe, Nalwoga, Zaina, Nakiwola, Sande, Mayombwe Emma, Benna, Nalwaga Jalia and Sebastian Kibem. All were transferred to Gombe Hospital for further examination” he added.

Enanga also confirmed that these were not fresh bodies as alleged by some conspiracy theorists and propagandists who have turned it a habit to misinform the public for their selfish reasons. All remains were in skeleton form.