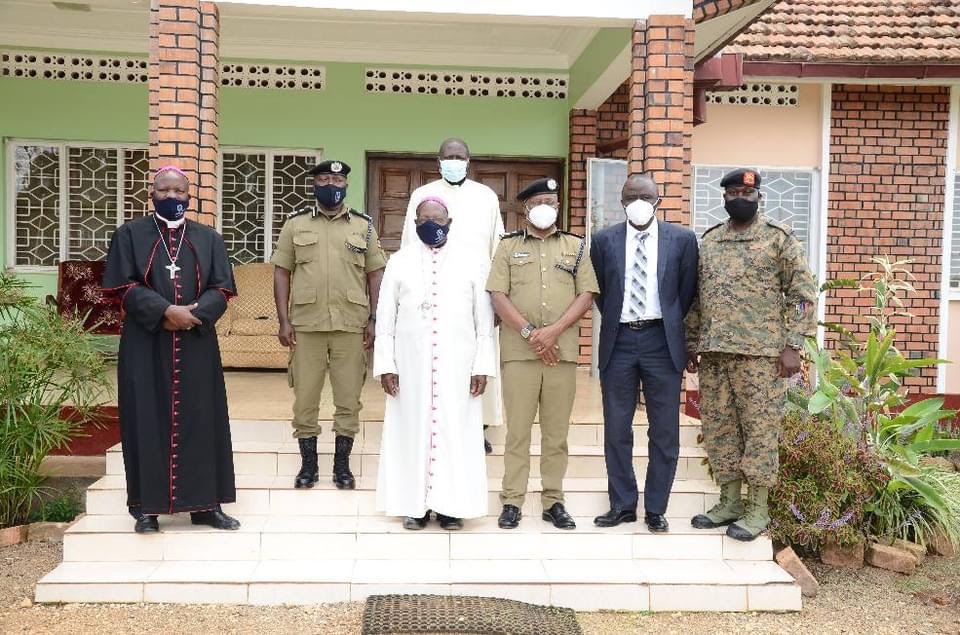 Kasingye who was accompanied by the Director human resource development Godfrey Golooba and Director Crime intelligence Chris Ddamulira, apologized to the Bishop Emeritus on behalf of the Inspector-General of Police, Martin Ochola.

The apology stems from an incident that happened on Saturday, when police in Mityana District used teargas to disperse members of Buganda Kingdom’s Mbogo Clan who had convened at their ancestral site at Mugulu – Ziggoti Town Council to attend thanksgiving prayers for their leader, Elder Gajuule Kayiira Kasibante.

The Mass which was being led by retired Masaka Diocesan Bishop John Baptist Kaggwa, was disrupted by police and military officers who fired teargas to block more people from accessing the venue, causing some elderly persons to faint after inhaling teargas.

“Today, I led a delegation of senior officers on behalf of the Inspector General of Police, to purposely meet the Rtd Emeritus John Baptist Kaggwa at his home in Masaka and delivered apologies to him, his family and the catholic church fraternity, over the disruptions caused during the thanksgiving ceremony of the Mbogo clan at the clan headquarters in Mugulu village, in Singo,” Kasingye noted.

The political commissar added that the IGP carried out a thorough review and evaluation of the incident and acknowledged the operational lapse which led to the use of teargas that spread and impacted on the congregation and the public.

IGP Ochola further apologized in addition to the earlier ones made regarding the incident he described as regrettable. He applauded the Bishop for his resilient and steadfast leadership during this disruptive incident by the territorial police.

“The IGP requested that all leaders (including religious leaders) should always involve the Police in programmes such as these for better coordination during this Covid19 pandemic to mitigate the risks of Covid-19 transmission among the entire public,” Kasingye said.

Kasingye will tomorrow lead the same delegation to meet the Katikiro Charles Peter Mayiga and apologize over the same incident. The Saturday operation was led by DPC Mityana, ASP Mwine Kukago whose men ordered the Bishop to cut short the Mass citing failure to follow COVID-19 SOPs.