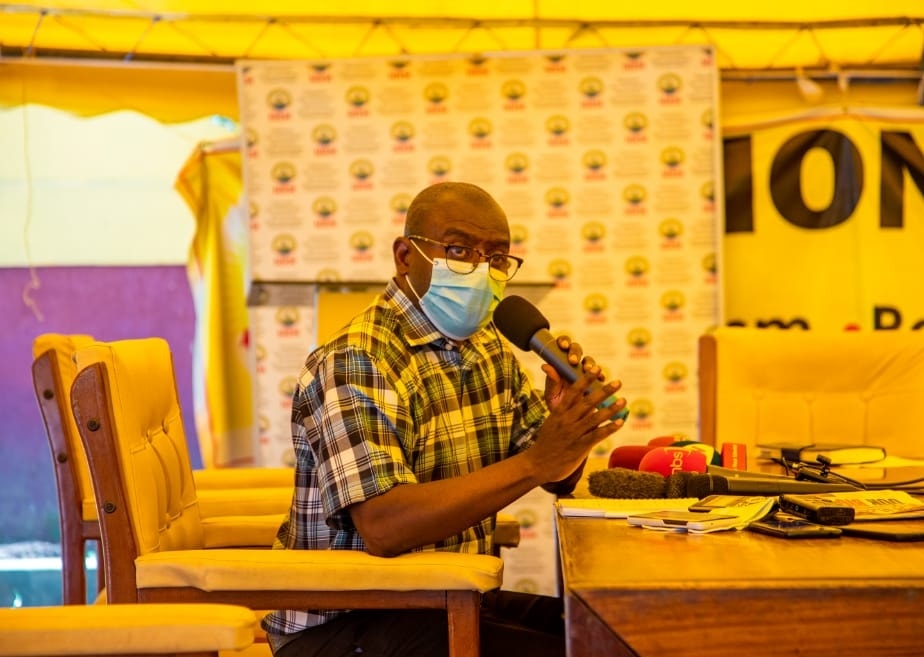 Oscar Kihika the ruling National Resistance Movement Party Legal Director has castigated National Unity Platform presidential candidate Robert Kyagulanyi for filing false affidavits, which upon realising that he could not defend before court caused the withdrawal.

While addressing the weekly party press conference the NRM headquarters on Sunday, Kihika said that Kyagulanyi realised that he could not defend his fabricated affidavits and had insufficient evidence to back up his petition, which forced him to withdraw the petition.

“Bobi Wine filed false affidavits yet he swore before the commissioner of oaths that they were true. We the respondents looked at them and filed ours in rebuttal. He was then given time to file affidavits in rejoinder, a thing he never did. He realized that his affidavits were fabricated given that we are living in the age of false and fabricated information,” Kihika said.

He added that the former Presidential candidate did not abide by the rules and guidelines set by the electoral commission right from his time of nomination, a thing the second respondent, the Electoral Commission has put on record.

“If you go to the public records of the supreme court and see the affidavits filed in response to the case that was stated by the petitioners, you will note that Bobi Wine from the very beginning was very clear that he intentionally said he was not to abide by the rule and directions set by the EC.”

The lawyer gave an example of Kyagulanyi’s nomination day where he disobeyed a lawful order that was issued by the police and published in the newspapers which action was supported by section 24 of the police act in regard to the direction of traffic.

He however blamed the media for presenting one sided narrative of campaigns by not showing the public the defiance side of Kyagulanyi, instead brought to light him playing victim following his multiple interceptions and arrests.

“I must say that the public missed some facts of Kyagulanyi’s defiance instead the media brought to public where he was lawfully intercepted and arrested for his actions. He then played victim and sought public sympathy. The justification for his arrest is on record but the public missed an opportunity to see that side of the story. With this petition, the public would see the story in full, the opportunity that has already been denied.” He said.

On Friday, the Supreme Court sitting in Kampala granted leave the former presidential aspirant Robert Kyagulanyi alias Bobi Wine to withdraw his petition he filed challenging the January 14th elections. In its brief ruling, the chief justice Justice Owiny Dolo said that the full ruling will be delivered on notice and determine whether the withdrawal will be liable to costs.

Kihika while smiling from ear to ear confirms that with the concession on the side of the petitioners and withdrawal of the case, President Museveni’s victory is sealed pending swearing in on May 12th 2021.

“With the petition withdrawal, this wraps up the court chapter. This therefore means that Museveni is the dully elected president of Uganda and he is waiting to swear in on 12th May 2021 as the constitution establishes,” Kihika said.

We did our duty- Judiciary denies having a hand in Bob Kasango’s death
Actionaid, Global Platform Uganda in Women’s Day Online campaign
Advertisement