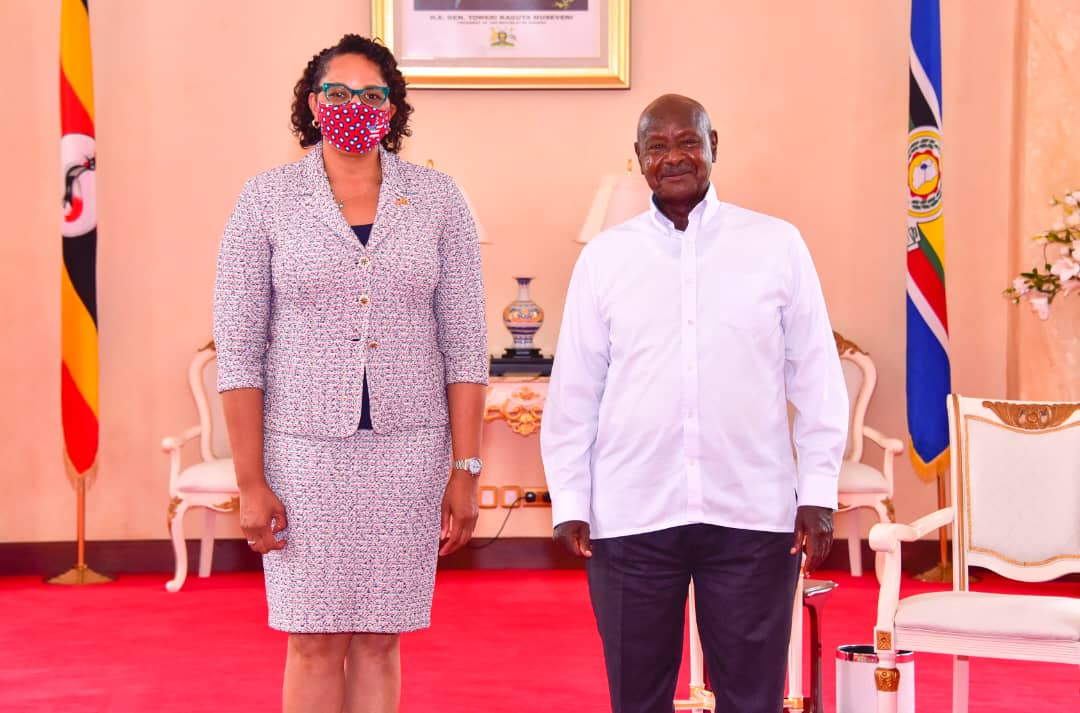 President Museveni told the Ambassador of Netherlands that her country is rich country inspite of its size and the big population.

Netherlands is the biggest producer of milk in the whole world, producing 10 billion litters per year. The two leaders pledged to work towards growing and expanding Ugandas’ milk production.

While receiving the credentials of the new Ambassador of the Arab Republic of Egypt, H.E Ashraf Mohamed Nabhan Swelam, President Museveni and the new envoy discussed the issue of the Nile water.

The Problem of Africa, the President said is not water or anything else but rather leadership. He pointed out the danger is primitive Agriculture, which can easily endanger water bodies.

The President called on the new envoy to invite Egyptian investors in Agriculture, e.g. in Fruit processing, Textile, electronic and machinery to invest in Uganda.

“He wished you a safe and peaceful election. Our President trusts your leadership”. Ambassador Mohamed Nabhan said.

The President assured the new ambassador that African countries are looking for freedom, mutual interest and cooperation between countries, adding that they don’t have opportunistic relationships.

He used the occasion to market Uganda’s fire fighting vehicle called “African Fire hitter” that was designed and made by the army using indigenous technology.

“We manufactured a vehicle which can fight fire. It is using our indigenous technology. I have been watching fires in California and Australia. I want to sell you this vehicle. It also fights locusts. Its land based, it can go in any terrain. It is unique,” he said.

Ambassador Brown revealed that her main goal is to expand the already existing good cooperation between Uganda and The United States. She commended the contribution of Uganda to peace building and stability in Somalia.

“We have collaborated with Uganda to bring stability in Somalia, we are grateful”. Ambassador Brown said.

The new Japanese Ambassador to Uganda H.E. Fukuzawa Hidemoto while presenting his credentials to the President conveyed the warmest greetings from the Emperor of Japan Naruhito.

Ambassador Fukuzawa who was in Private sector before being called for a tour of duty in Uganda said he was happy to see the progress of Uganda since he first came here in 1984.

“I came here in 1984 for a business trip. Now the country has changed so much. The sites are very beautiful. It’s a rich and beautiful country”.  He said.

He said that the friendship between Uganda and Japan is strong and should continue.

President Museveni told his guest that Uganda has poor people in a rich country.

“Japan does not have agriculture or minerals. They only have the Human resource but they are successful. Am glad you are from private sector, you can get me more investors from Japan to invest in Uganda,” he said.

While receiving credentials of the new Ambassador of Saudi Arabia to Uganda H.E Jamal Mohammed Hassan Al-Madan, President Museveni that Uganda has worked well with Saudi Arabia because it’s also against extremism.

He urged the new Ambassador to invite investors from Saudi Arabia to come and invest in Uganda. “I also need a market for milk, fruits, maize, Sugar etc because we have them in plenty,” he said.

The new Saudi Ambassador was happy about the excellent weather in Uganda, adding that Ugandans are very peaceful and welcoming people.

He revealed that Saudi Arabia will sign a general cooperation agreement which will see Uganda selling its products to Saudi Arabia and vice versa.

“Am happy to be here in this beautiful country to represent my country. I feel at home here”. Ms Kate said.

The new British High Commissioned commended President Museveni’s efforts and contribution to peace building in South Sudan. She revealed that since they met recently in Jinja, there has been progress in Juba curtsey of the President’s guidance.

“I want to thank you for your generosity and time. We followed it up in Juba and things have started to work out. Thanks for taking action,” Ms Kate said.

President Museveni welcomed the High Commissioner to Uganda and pledged to work together to exploit Uganda’s development potential.

“Once we solve that and we put more money in capital funds, for the Youth, Women etc., they will become job creators themselves,” he said.