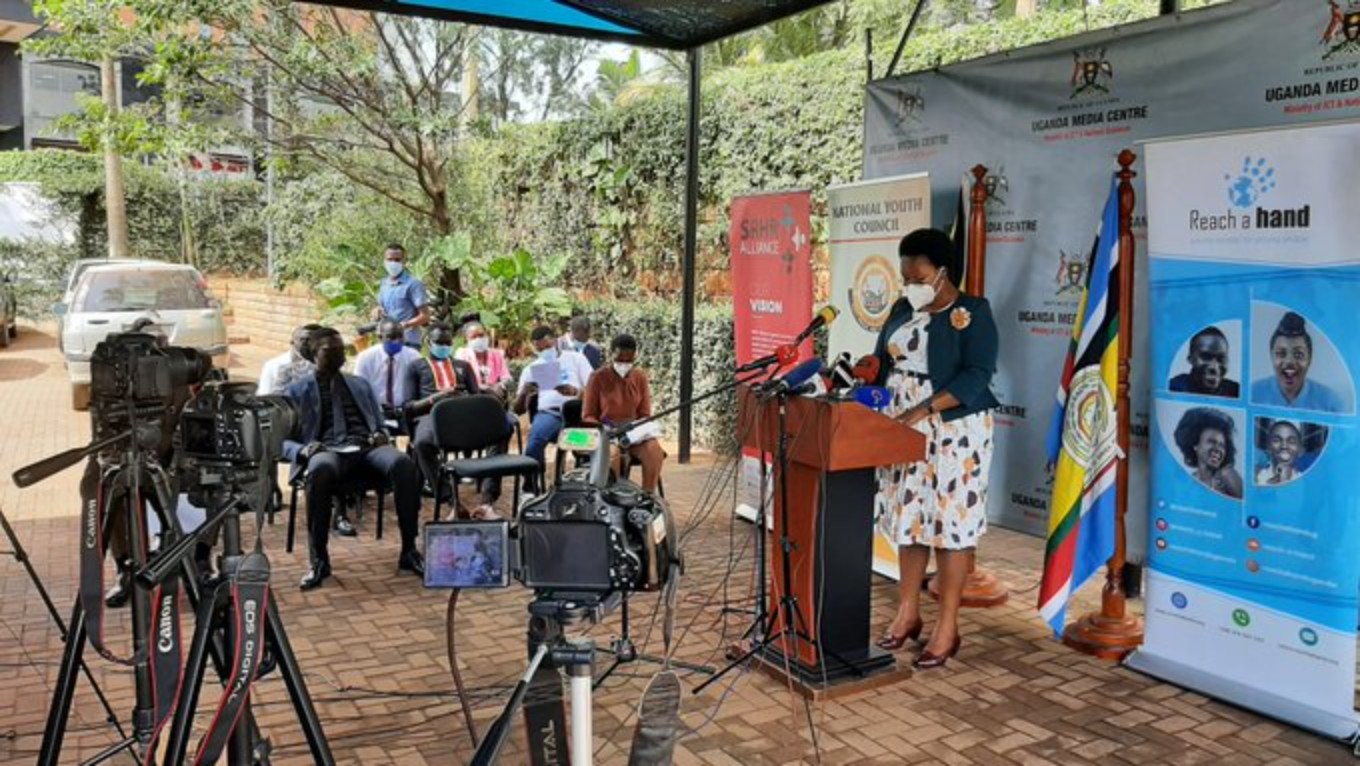 The launch happened on Tuesday morning at Uganda Media Centre. She noted that this is one of the greatest achievements for the Ministry of Gender, Labour and Social Development.

According to Mateke, the helpline was started in partnership with UNICEF and other stakeholders to encourage children and adults to report cases of child abuse and all forms of child rights violations.

Ever since its inception in 2014, the helpline has supported thousands of children, connecting them to essential protection services and has also been a voice for countless children across the country.

“Currently, the helpline has centres in 68 districts and receives on average 950 calls a day. Also, starting this year, the helpline will offer support to victims of Gender-Based Violence. The continued growth and investment in the helpline is a show of commitment by the Government to protect the children of Uganda from violence and abuse. I would like to take this opportunity to thank all the agencies that have contributed to this growth- UNICEF, UNFPA, CDC and its many partners among others” the minister said.

She added that each of the individual organizations in the Joining Forces consortium; ChildFund, Plan International, Save the Children, Terre des Hommes, SOS Children’s Villages and World Vision, have supported the helpline at the national and district level.

Minister Mateke further applauded the Probation and Social Welfare officers, the helpline’s foot soldiers, who, she says through the Department of Youth and Children’s affairs at the Ministry of Gender, Labour and Social Development, work tirelessly to respond to every case that is reported through the helpline.

“In the establishment of the helpline, we have seen that when children know their rights, they will speak up when those rights are violated. This is evidenced by the increase in calls from children. 13% of the calls received by the helpline are from children, an increase from 0.2% in 20 14. However, more needs to be done especially as Violence Against Children continues to be an issue” she added.

In 2019, the helpline managed 4,574 cases of violence. In 2020, it received and handled 5,558 cases, its highest number to date. During the periods of lockdown, calls regarding sexual violence increased to 43% from 38%. This makes sexual violence and neglect the most reported cases.

“We also noted that females are the most abused, making up 60% of all cases. The biggest percentage of our calls are regarding children aged 14-17. This age group also have better access to phones and make up most of our child callers. This is saddening, especially as children have been in their homes for the past two years. It shows that many homes are not safe for children and more needs to be done to equip parents and caregivers to protect their children” the Minister noted.

She says that it is more disheartening to know that there are many violations that are going unreported and that many people turn a blind eye, or are not equipped to report them.

“Violence has far-reaching effects on a child and their development. It also undermines the very fabric of society. The good news is that violence against children is preventable. We can protect every child. However, we all have a role to play in making this a reality. As Government, Parliament, Parents and Caregivers, Teachers, Religious and Cultural Leaders, and the Media, we must all begin by speaking out on violence no matter where it occurs. It is important, crucial, and urgent to report any form of violence. This is the essence of the Sauti 116 awareness campaign and I applaud Joining Forces and the European Union for working with the Ministry on this initiative to promote the helpline” she said.

The campaign is a promotion and empowerment of children to prevent and report cases of violence.