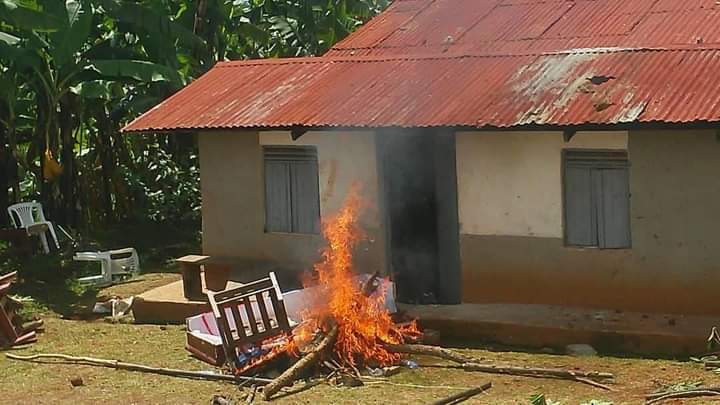 A group of angry mourners have burnt a dead body of Amos Mugume, a notorious kidnapper who was shot dead by police on Friday, sending him to hell twice.

The deceased was one of the most wanted criminals in Fort Portal Tourism City, following his involvement in kidnaps. However, his luck run out on Friday when police shot him dead in Karamaga cell, Central Division, Fort Portal City after he attempted to a soldier with a panga.

Drama ensued on Sunday, when a group of angry residents stormed his mother’s house and set the body ablaze during the burial ceremony.

It is reported that as the burial arrangements were ongoing on Sunday, angry mourners stormed the house where the body was being kept, brought it into the compound, poured petrol on it and set it on fire with its coffin.

The angry people did not even allow for the deceased’s body to be prayed for, claiming he did not deserve a descent burial.

Mugume’s arrest came when angry residents tried to arrest him but instead, he hacked one of them identified as Patrick Kyomuhendo with a panga. Residents called police, but the suspect escaped to Karamaga swamp where he was found later by a joint security team of police and military led by Kabarole District Police Commander, John Oese and tried to hack a soldier, leading to his shooting.

According to Vincent Twesige the Rwenzori West Regional Police Spokesperson, Mugume was shot and died on spot.

Mugume was arrested with six others in 2018 for allegedly kidnapping a one and half-year-old child from her parents’ home in Maguru, Central Division, Fort Portal Tourism City.  The baby was reunited with her family after the parents reportedly paid a ransom of 2.5 Million Shillings. However, Mugume escaped from jail.

The Officer in Charge of Fort Police Station Emmy Lorika noted that Mugume was to blame for all that happened, including being sent to hell twice.