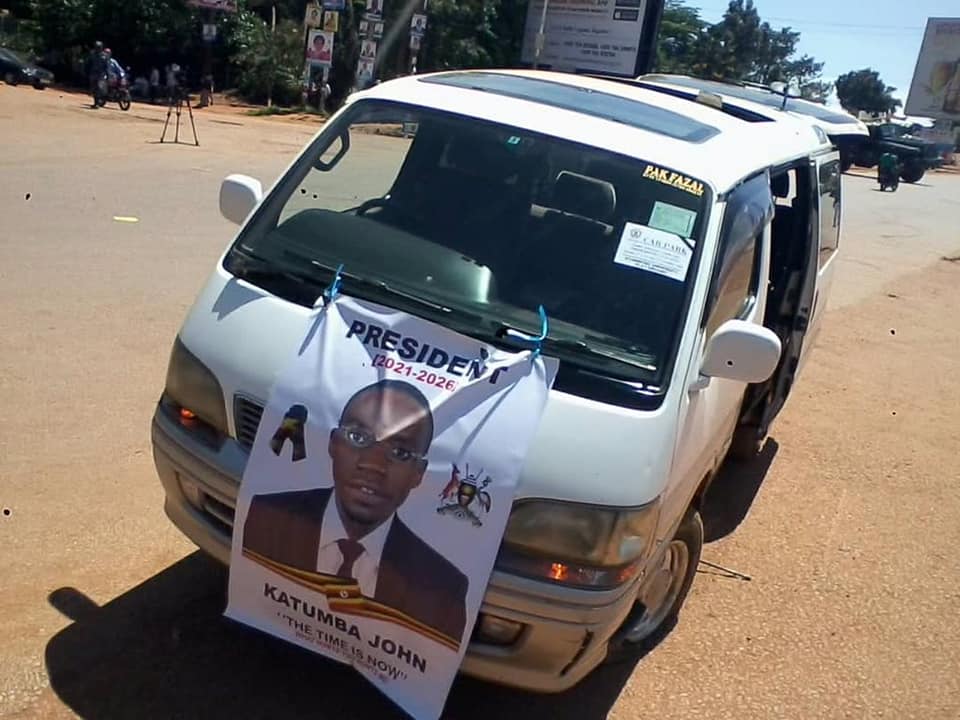 The Independent electoral commission has declined to nominate Katumba John for presidency after showing up without proof of payment for nomination fees.

Katumba who earlier on suffered vehicle troubles after his car got a flat tyre, forcing him to run to the venue. Police stopped the young man who claims to be a fresh graduate at Nakawa while driving a vehicle with a flat tyre. He was later saved by police who offered to carry him in one of its vehicles.

Upon arrival at the nomination venue in Kyambogo, Katumba’s agents handed over his papers to the EC only to be asked later to pick them because they lacked proof of the UGX 20 million nomination fees.

The EC chairman Justice Byabakama Mugenyi asked them to take back the papers as their candidate could not be nominated without the payment receipts.  He was however advised to rectify the matter and return for nomination.

However, Katumba says he could not bank the money and carried it in cash since he had no TIN.

“I have been trying to reach out to the EC, writing to Mr. Byabakama over that issue, it looks to be a small issue but now it has stopped me from getting nominated. The issue is about having a TIN, getting a TIN needs you to be employed or owning a company, of which I don’t do any because I am a fresh graduate from Makerere” Katumba said.

He added that immediately after leaving Makerere University, he went to look for signatures to support his nomination.

“Ugandans entrusted me with their signatures as well as their money, because they are my greatest funders. I still have an option tomorrow to bring the money because I came with it in the car, I tried as much as possible to pay it and I couldn’t.

Since we are still in the struggle, I am going to release a song called “Kino kyekisela” very soon where we have to fight on. Even if they don’t nominate me, I will join the other presidential candidates to unseat Museveni” Katumba added.

When asked which candidate he will support, the young running man said he was not choosing an individual candidate.

It remains unclear, if he will return to Kyambogo tomorrow.