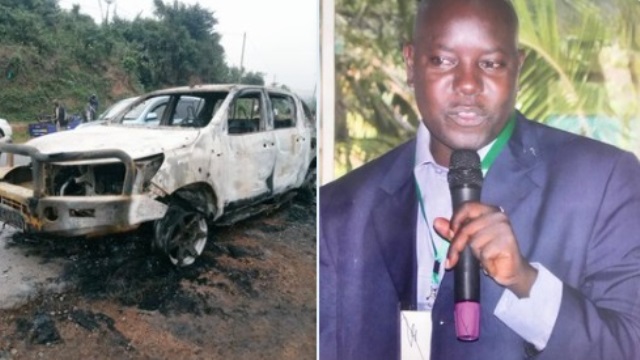 Police at Kasangati are searching for unknown assailants who attacked a vehicle UG 0865 Z belonging to Ogwang Charles the Chief Administrative Officer Bukwo District.
Ogwang was shot by the assailants before the car caught fire
According to Luke Owoyesigyire the Deputy Spokesperson KMP, the incident was reported to Police by locals at 2309hrs on 08/07/2022 after they heard gun shots at Kiryowa, Mabanda, Bombo Road near Banu Petrol station.
The officers from Both Matuga and Kasangati police stations rushed to the scene only to find the car ablaze. Fire prevention and rescue services were called and they responded and extinguished the burning vehicle.
“We later discovered that the occupant of the vehicle was Ogwang Charles Chief Administrative officer Bukwo and that first the responders had rushed him to Bombo Hospital where he succumbed to the bullet injuries sustained,” says Owoyesigyire.
He adds that an inquiry has kicked off to investigate the murder and what transpired before the shooting.