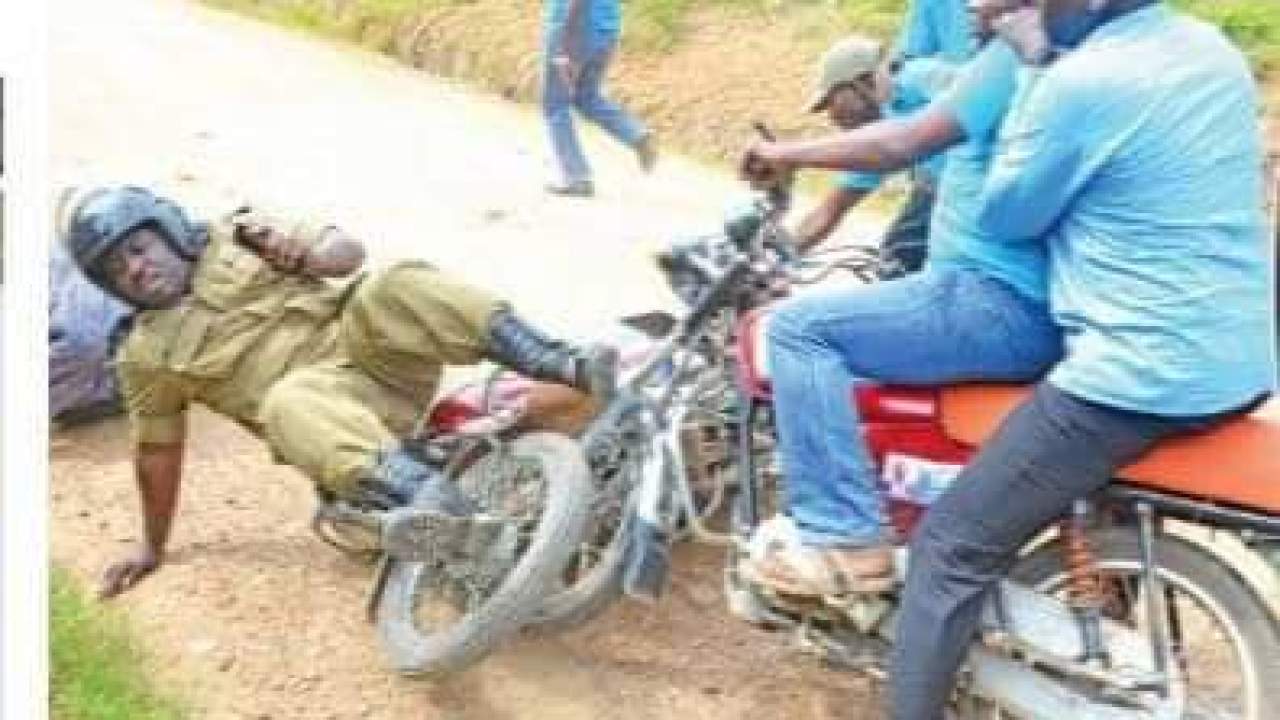 Police in Mbarara launched a hunt for the boda boda rider who captured by the media knocking down SP Rutagiira John, the DPC of Mbarara on Tuesday December 1, 2020.

The incident happened in Mbarara as Amuriat tried to illegally hold a procession through the city centre, yet he had been denied access by police. The rider who is in hiding is being charged with careless driving and causing an accident under the TRSA, Mbarara CPS TSD10/03/12/2020.

The unidentified man was carrying Eng. Patrick Amuriat Oboi the FDC presidential candidate when the DPC tried to stop them.

Rwizi Regional Police spokesperson ASP Kasasira Samson says a scuffle ensued in the process and Motorcycle registration number UEX 650D that was carrying Amuriat knocked the DPC to the ground though he didn’t sustain any serious injuries.

Kasasira narrates that Amuriat started his campaign rallies in Rwizi from Ntungamo district on the 01/12/2020 where he had three rallies in Rwahi, Rwashamire and Kyamate.

The candidate was accompanied by Rtd. Col. Dr. Kiiza Besigye, and thereafter moved to Rwampara district where he was not allowed to hold any rally because it was late.

On the 02/12/2020 Amuriat moved to Isingiro district as scheduled to hold rallies in Kajaho, Endizi, Kabingo-Isingiro town council and Kaberebere town which was successfully secured.

However, his final destination of the day was Mbarara but security had earlier guided his team and agreed on the routes to be used when accessing the city. The candidate was to use Nyamitanga, Ruti through Mbarara bypass to Buffalo roundabout then to Kakyeka stadium where his first rally was to be held before moving to Bwizibwera in Kashari in Mbarara district.

However, Kasasira says the candidate defied this and opted to use porous routes from Isingiro district through Buremba road in Kakoba Division where he was intercepted at Bishop Stuart University around 1600/c hours with intentions to go through the main business centre of Mbarara city.

He adds that as security tried to engage him, Amuriat decided to jump out of his car onto a boda boda that was part of his convoy and would later knock the DPC.