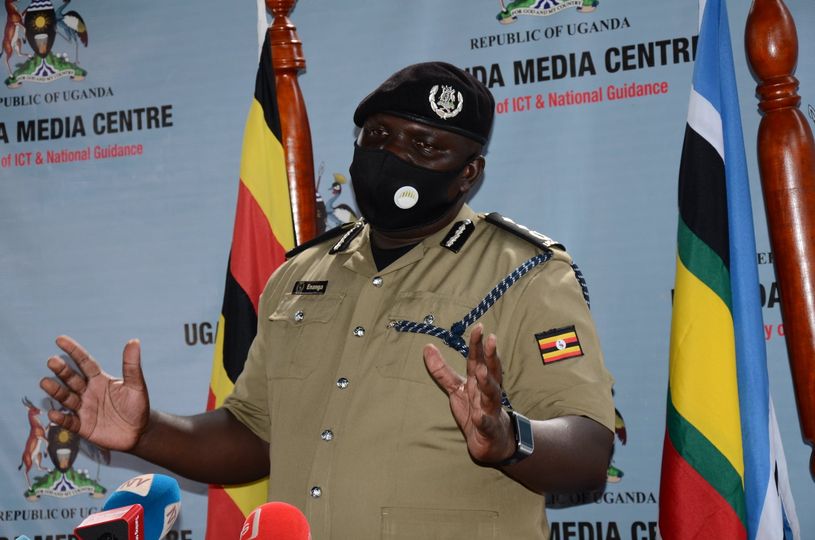 The Uganda Police Force has clarified that security operatives shot at the NUP Presidential Candidate’s car tyres after he attempted to run over one of the officers at a checkpoint.

While addressing the media in Kampala on Wednesday, police spokesperson Fred Enanga said Kyagulanyi ignored police directives to head to his designated campaign venue at Budondo primary school where supporters were waiting for him.

“In the process of moving to Budondo from Njeru the candidate Hon. Kyagulanyi branched off to an access road at amber coat market to head to Jinja city and it is during that movement that he got cut off at a security check point that was ahead of amber coat. He tried to drive through the check point almost knocking down one of the security officers and this prompted them to shoot at his car tyres to deflate them” Enanga says.

Earlier before the Jinja incident, Enanga says the candidate arrived at Kayunga at around 10am and was received by the security team which briefed him about the campaign venue at Bukeka playground in Kayunga Sub County but he instead declined this venue.

According to Enanga, the NUP team in Kayunga and the Returning officer had agreed upon the selected venue as per the EC guidelines, but the candidate decided to maneuver through some village roads, leaving the police behind.

“It was at Kyampisi that his driver stopped in the middle of the road, pausing some serious threat to other road users. He defied the police directives to move to Bukeka playgrounds which was the designated playground. It is at this stage that he jumped off his vehicle and had a verbal exchange with one of the commanders of the patrol cars and during that exchange, a teargas canister was hauled from behind and the crime intelligence officers picked some images from there and identified the person who hauled this canister as one of the private security members of his detail” Enanga clarified.

Police is now tracking down the gentleman in the video which has been shared widely on social media, in order to arrest him and question him on how he got the teargas canister.

Enanga says the canister injured a police officer ASP Kato and Kyagulanyi’s team member producer Dan. He further explains that Dan was at that time also attempting to deflate police car tyres with nails that NUP supporters have been using in the past, while other members attempted to set a patrol vehicle on fire.