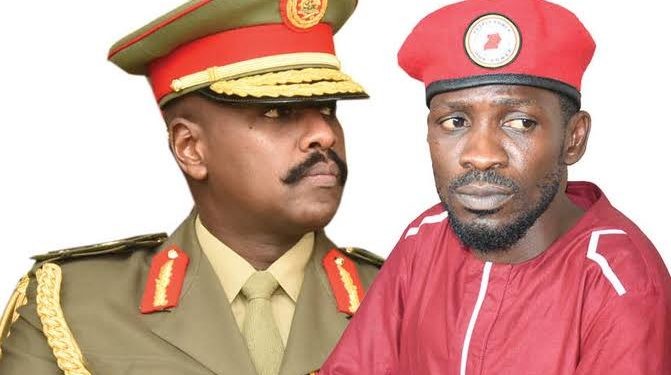 However, this has not gone down well with Kyagulanyi, who says that under the current leadership, the occupiers of these particular positions usually end up as overall Commanders of the army.

He added that the appointment of Gen. Muhoozi is consistent with reports that he is being groomed to seize power once President Museveni is ready to leave.

He equates this to “what dictators elsewhere on the African continent including Gaddafi-era Libya, Equatorial Guinea, Chad and Bashir-era Sudan attempted to do but with little success.”

“You may recall how Muhoozi promised to “beat very badly” his father’s opponents in the 2021 elections. As commander of their private army the SFC, Muhoozi has been supervising the massive abduction, torture and murder of supporters of the National Unity Platform, many of whom have since passed on. Gen. Museveni recently admitted that SFC under his son were behind these gruesome crimes” Kyagulanyi alleged.

According to the NUP leader, the appointment of Elwelu portends an even worse phase of terror against the political opposition, led by the military who are increasingly playing an oversized role in the suppression political dissent in Uganda.

Elwelu is remembered for his role as commander during the infamous 2016 Kasese massacres that left over 100 people dead. Elwelu insists they needed to die.

“He is being rewarded for a job well done, but also to strike further fear into those who oppose his master. Nevertheless, fellow citizens, these appointments should not surprise us because we all saw them coming — every dying horse is entitled to its final kicks. Like history has always proven, there is no amount of preparation a dictator may make that can save them from their ultimate fate. So long as we remain united and maintain our resistance to dictatorship, Uganda Shall SOON BE LIBERATED” Kyagulanyi said.

President Museveni recently appointed former CDF Gen. David Muhoozi as State Minister for Internal Affairs, leaving a void in the leadership of the army. Gen. Mbadi is one of the most senior UPDF commanders and former Presidential guard.