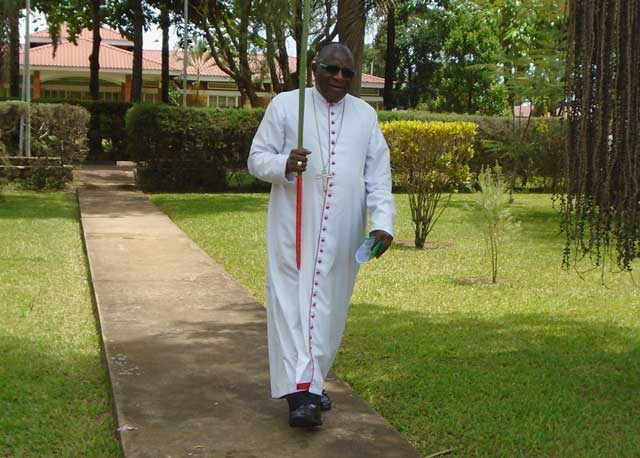 Pope Francis has appointed the Bishop of Kasana Luweero, Rt. Rev. Paul Ssemogerere as the apostolic administrator for the Kampala Archdiocese.

Bishop Ssemogerere’s appointment follows the sudden death of former Archbishop His Grace Dr. Cyprian Kizito Lwanga which happened on Saturday. He will take care of the Archdiocese until the pope announces the new Archbishop.

The Papal Nuncio to Uganda, H.E Luigi Bianco made the announcement during the final Mass leading to Lwanga’s burial today.

The Nuncio described late Lwanga as a welcoming and developmental person.

Meanwhile, the Chairman Episcopal Conference Bishop Rt. Rv. Joseph Antony Zziwa the Bishop of Kiyinda-Mityana Diocese noted that Archbishop Lwanga has been a Bishop for 24 years and was organizing to celebrate his 25th anniversary next year.

Speaking on behalf of all the Bishops in Uganda, Bishop Zziwa appreciated all those who have helped them with organizing the funeral of Lwanga. He noted that the prelate has left a great mark on Uganda as a whole.

“Archbishop Lwanga has left a mark on the Catholic Church in Uganda as well as the social and political life of our country he used his energy to serve as a priest and as a Bishop. As the first bishop of Kasana Luweero diocese, he worked hard almost from scratch to leave the diocese where he left it” Bishop Zziwa said.

Adding that the late Archbishop has been committed to promoting the catholic church’s mission of integrating human development.

“He has done this through various initiatives which he has headed. On our part as Uganda Episcopal conference, he has been charged with some commissions of the Uganda episcopal conference, particularly Karitas, Justice and Peace” Bishop Zziwa told mourners.

The late Archbishop will be remembered for overseeing the development of both Namugongo and Munyonyo Martyrs Shrines.

President Yoweri Museveni in his condolence message read by Vice President Edward Kiwanuka Ssekandi, noted that the deceased was a humble and faithful servant of God, whose noble actions and wise counsel facilitated the growth of Christian faith in Uganda and beyond.

The Katikkiro of Buganda, Charles Peter Mayiga who carried the massage from the Kingdom applauded the late prelate for the work he has done for the Catholic Church and Buganda Kingdom.

“We applaud him for the job well done in Kampala Archdiocese. Being a Church leader did not stop him from understanding culture and norms. He has been supportive of Buganda Kingdom projects” Katikkiro Mayiga said.

He added that the Archbishop supported the Nabagerreka Sylivia Naginda’s projects like Ekisakkatte. Owek. Mayiga told mourners that he and the deceased had a special relationship since his time as Bishop of Luwero, until the time of his death.

Lwanga was buried inside Lubaga Cathedral on Thursday afternoon.

He was ordained a priest on 3rd June 1983 and consecrated Bishop on 23rd August 2008by Cyprian Kizito Lwanga.

He attended Kigero Primary School before transferring to Kisubi Boys Primary School and then studied at St. Maria Goretti Senior Secondary School Katende, where he completed his O-Level studies.

In 1976, Ssemogerere and seven other young men became pioneer students at St Mbaaga Seminary at Ggaba, this was the first class of this seminary, which specializes in admitting men to train as priests when they are older than usual, and without attending minor Seminary.

On 21th November 1981, he was ordained a deacon by Archbishop Rembert George Weakland, the Archbishop of the Roman Catholic Archdiocese of Milwaukee.

He was ordained a Priest on 3rd June 1983 at Kampala, by Cardinal Emmanuel Nsubuga, Archbishop of Kampala and he served as a priest in the Roman Catholic Archdiocese of Kampala, at Christ the King in Kampala until 4th June 2008 when he was appointed Bishop.

He was appointed Bishop of the Roman Catholic Archdiocese of Kasana-Luweero, on 4th June 2008 and was consecrated as Bishop on 23rd August 2008 at Kasana-Luweero by Archbishop Cyprian Kizito Lwanga, Archbishop of Kampala, assisted by Cardinal Emmanuel Wamala, Cardinal-Priest of Sant’Ugo, and Cardinal Emeritus of Kampala and Archbishop Paul Tschang In-Nam, Titular Archbishop of Amantia and Papal Nuncio to Uganda at that time.