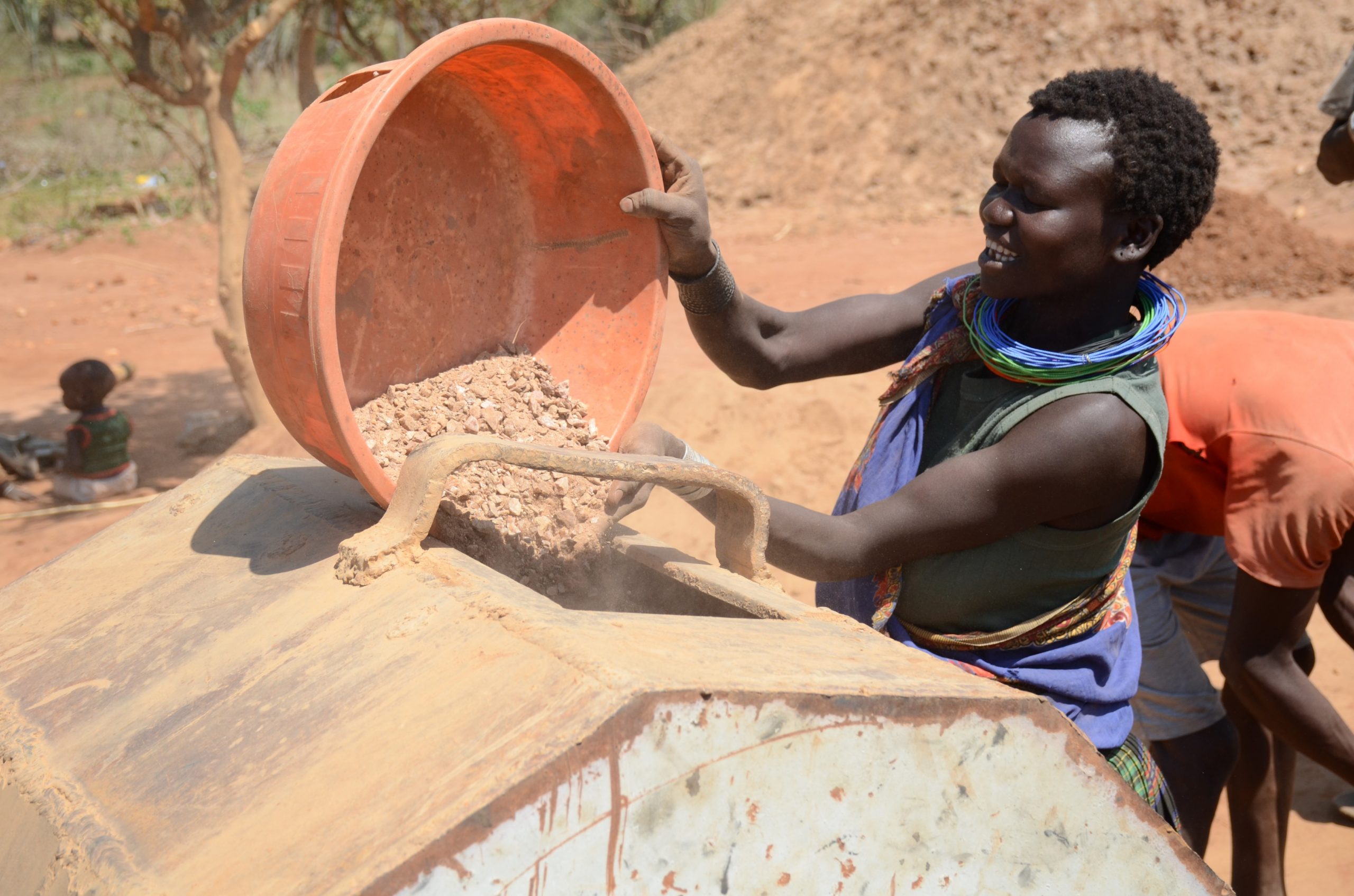 When the World Health Organization classified COVID-19 as a pandemic; the majority of nations experienced a global panic and closed most of their economy for many months.

And in an effort to contain the disease, which was unknown and would spread more quickly through touch in Uganda, President Museveni issued an order in March 2020 for the closure of all crowded facilities, including public transportation, schools, churches, and bars.

Although it was anticipated that this shutdown would only last a few days, it lasted weeks and then months, forcing individuals to remain at home without any discernible economic activity to support the firm in other ways.

A glimpse of experience during the COVID-19 lockdown

The lockdown left tens of thousands of artisanal miners idle at home for months without any active labour at the mines in the eastern country’s marble and gold mining areas of Moroto and Busia.

However, the acute poverty at the time drove some people to risk their lives in the gold mines in order to fulfil some of their basic requirements.

Evelyne Nekesa, a female artisanal miner at the Tiira mining site in Tiira town council in Busia district, is working with bare feet while wearing a black soft flowery dress and a pink scarf wrapped over her head.

As her colleague gathers to load them in the sack beside the way to bring them for crashing at their boss’ compound, she uses tiny hoes to break up some gold ores from the edge of the hollow mine.

Nekesa, who has worked in the mining industry for five years, said the covid-19 lockdown was terrible because she never felt at ease.

Nekesa admits that she wasn’t prepared since she had used her funds to pay for her children’s tuition at the local private schools. The lockdown took her by a surprise.

Nekesa said that she found it extremely difficult to provide for her family because all mining operations were stopped as a result of the lockdown.

“My husband and I are both artisanal miners, and when the mines stopped, it left us with no employment and no way to earn money to buy food for the family,” Nekesa said.

“Since mining was our sole source of income and there wasn’t our ancestral home, we didn’t have a garden from which we could collect food for the family. This made it possible for us to get by on our daily wages to satisfy our necessities,” she added.

In order to sell safety equipment and provide meals in the mines, Christine Nabwire moved from Manafwa to Tiira. She stated that the lockdown had a significant negative impact on her company because the mines were closed.

“There were no businesses open since there were no transportation options, so I had to spend every penny I had saved in addition to the company capital to feed my family in this location and the town as well.”

An entrepreneur who deals in gold, Beatrice Amoding, observed that the limited work hours severely hampered their productivity since they would often find themselves doing little work.

People would constantly work in continual fear of being jailed if they were spotted moving in the night, yet some procedures compel one to work too late hours, according to Amoding. This had a significant negative impact on productivity.

Another artisanal miner, David Etyanga, observed that the limitations imposed by the lockdown decreased their pace of output and so affected his revenue.

“Before lockdown, we had over 20 people working at this washing centre, but because of the restriction in place, only a few of us were allowed to work with a lot of work too, and the payment was not always made on time because my boss would hardly travel outside of Kampala to sell the gold,” said Etyanga.

The lockdown came into effect at a time when the gold rush was in full swing and mining activities were at their busiest, according to Paul Angesu, the Tirra village chairperson who also serves as the guardian of the Tiira mines. He observed that this limited their chances.

Angesu emphasizes that, their inability to sell their goods at a time when market prices were high as a result of the mobility restrictions was a serious setback. “Because there was restricted movement and only a select group of individuals are permitted to move, it was extremely difficult for us to sell our goods to the market, according to angesu.”

Because there was restricted movement and only a select group of people are permitted to move, it was extremely difficult for us to sell our product to the market, according to angesu. He emphasized that as a result of the restrictions on movement, they were unable to transport the machines to the sites, which delayed the execution of their plans even though they had invested a significant sum of money.

“Since our partners pulled out of the contract to invest in the Congo, we have suffered enormous losses that we are currently recuperating from. We have faith that the condition will improve once the global petroleum crisis stabilizes,” Angesu stated.

Andrew Byaruhanga, the Executive Director of a regional non-governmental organization Working in Karamoja demonstrated that the region’s mining corporations had more chances to take advantage of the residents during the lockdown.

According to Byaruhanga, they discovered that the mining corporations that collect limestone and marble in Moroto utilize the relief food to exploit the land rights of the already disadvantaged people who might be struggling to feed.

“And there were few workers because COVID-19 standard operating procedures had to be followed, and the hopes of the artisanal miners, who live like fishermen in the hopes of getting money the next day, were dashed.”

Given the severe economic difficulties at the time, James Lokiru, an artisan in the Tapach Sub County of the Moroto area, disclosed that the majority of craftsmen turned to charcoal burning as an additional source of income because the marble truck barely ever visited the mining sites.

Many artisanal miners lost their jobs and means of support as a result of the mining activity’s suspension; they were also left without savings due to the fact that most of them live hand to mouth and had few opportunities for investments or savings.

According to Amoding, women were more negatively impacted by this sudden unemployment than men because women typically do more unpaid work at home while men had easier access to other sources of income and casual work.

She added that domestic violence in homes was sparked by the abrupt unemployment and high food prices as a result of the previous year’s bad harvest.

“At the beginning of the lockdown food was rarely found due to bad harvests in the previous years and rains had been delayed. Thus, families that did not have any other livelihood had a really terrible time,” said Amoding.

“Most families that had been relying only on mining to feed their homes witnessed a lot of domestic violence as these would be in constant conflict over food and other domestic needs,” she added.

Although it is uncommon for youngsters under the age of 18 to be present at mine sites, the pattern altered when these (learners) entered with their parent’s permission since they were unemployed and the poverty was biting.

Another gold miner in Tiira named Josephine Aguttu noted that the children joined mining in pursuit of daily revenue for food and other requirements while for others, their parents prefer to work with them in the mines than leave them at home unattended.

The reopening of schools has relieved their worry since the children are now safer under the supervision of their teachers, according to Aguttu, who was quick to note that mines are not a safe place for kids to be.

Byaruhanga agreed, saying the protracted lockdown had a terrible impact on the kids since some had stopped attending school to work illegally as cheap labour in the mines. Dispite of the fact that it is against the law to employ anybody under the age of 18 in the mining industry, Byaruhanga’s NGO is working to change attitudes in the local population.

Artisanal miners are reconsidering adding agriculture as a secondary source of income to mining after enduring problems associated with feeding families, among other difficulties, during the lockdown.

50-year-old Jacklyn Aboo who was employed at the Tiira mining site observed that the scarcity of food during the lockdown inspired her to hire land and plant additional crops with her family.

“You never know what can happen next, so I’ve learned the hard way to always keep food in the house and take care of my gardens before going to the mines, said Aboo.

According to her, “depending solely on mining operations for subsistence without diversification may be deceptive like we were during the epidemic.”

According to Stephen Wasike, the Busia district chairperson, there has been a dramatic shift in views toward farming and other businesses among artisanal miners, resulting in increased acreage of land being farmed and better food production in the area.

Wasike stated “Despite the numerous new mining pits that have cropped up around the region, the artisans have had a second thoughts about having farming one of their main occupations,”

Wasike said that in an effort to help the mining sector, the district had established a separate department that could deal with all of its problems.

“We hope that by creating this department, we will be able to examine all of the difficulties faced by artisanal miners and provide them with adequate help that satisfies their needs,” Wasike shared.

George William Wapuwa, the resident district commissioner of the Moroto district, also mentioned the government initiatives that have been presented with the intention of assisting the craftsmen.

“The government created emyooga seed cash, which some craftsmen have been able to borrow at cheap interest, and this is assisting them in establishing alternate livelihoods outside mining,” added Wapowa.

He said that other non-governmental organizations are increasing their engagement and the government is also constructing more valley dams in the district to help the craftsmen cope with the effects of the post-COVID-19.

Byaruhanga made the remark that many of the Karamoja artisanal miners are now starting small businesses within their communities and outside, which he feels is an indication of their resiliency.

In order to provide for their basic necessities, over 200,000 artisanal small-scale miners in Uganda today extract different minerals from under the earth’s surface. Despite all of their hardships, they have shown a strong spirit of resistance and a positive outlook on life.

Continue Reading
You may also like...
Related Topics:Artisanal mining in karamoja, COVID-19, Featured