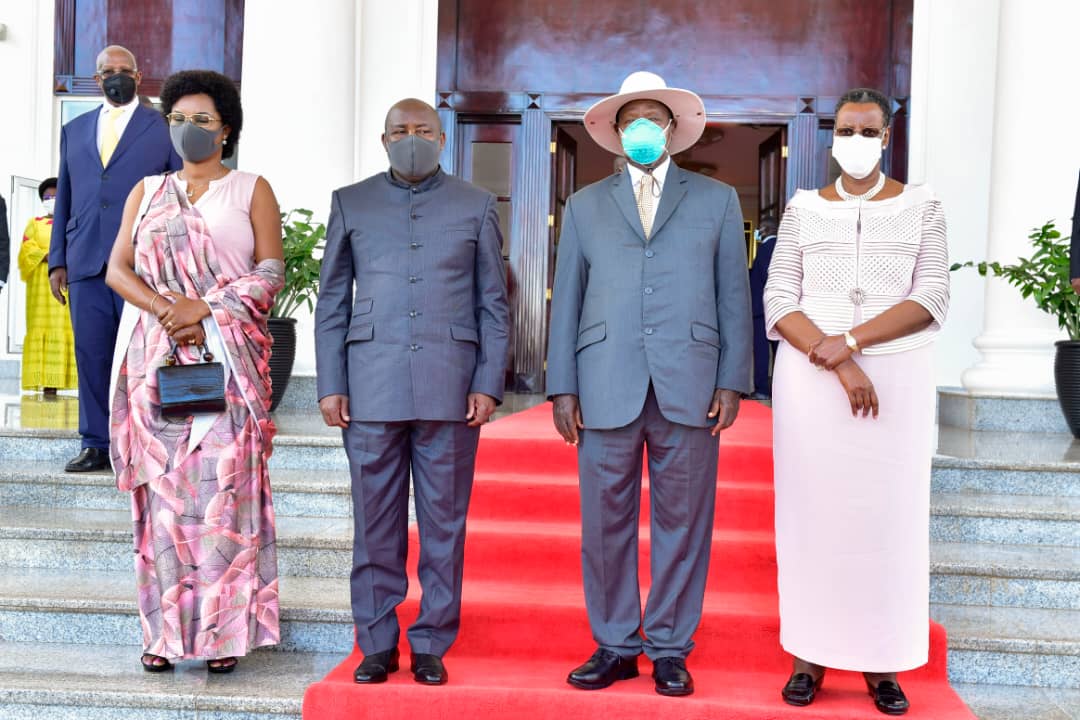 “Now is a time for development to improve the lives of our people. We have natural resources; we are in a good region and we are good to do business with Uganda. We already see many Ugandans coming to Burundi. We want investors to come. We have many natural resources and tourism potential,” he said.

President Ndayishimiye made the remarks on Thursday during a two-day official visit to Uganda. He arrived on Tuesday to attend President Yoweri Museveni’s swearing in ceremony at Kololo Ceremonial Grounds.

The President who is accompanied by the First Lady of Burundi Angeline Ndayishimiye met President Museveni at State House Entebbe on Thursday and noted that Burundi considers President Museveni as a father of their nation because ‘you gave yourself up’ to help Burundi to bring peace and reconciliation and now as you see Burundi is in peace because of your efforts.

“Burundi will not forget how you gave yourself up in 2015 and sacrificed self and came to Burundi by road when other countries were going out of Burundi thinking that there was war. It was a sacrifice and we thank you very much. We came here to look for your blessing as our elder. We passed through a bad moment when our past President Nkurunziza died. He would be my adviser but unfortunately, he passed away. Now it is you to advise us,” he said.

He added that Burundi and Uganda have a lot of business to do including in exchange in agriculture, Minerals etc.

“We came to tell you about the situation in our country. We have security, peace and we are happy that you have supported us. Going forward, we need a meeting of the joint commission to work together as brothers and sisters. With you, we shall win against poverty in Burundi,” he said.

President Ndayishimiye who is due to assume the EAC chair said he is confident that Museveni will continue to advise so that Burundi can be at same level with the other partner States.

“We are now at the foundation and we need your support,” he said.

President Yoweri Museveni welcomed President Ndayishimiye and his delegation and said the relationship between Burudni and Uganda is an old one.

“We know one another for a long time. Even before Europeans, Barundi were coming here from Kigoma Boha to look for work and some stayed. I am very happy that there is peace in Burundi now and that reconciliation going on. What we need to do is deal with the economy. A joint permanent commission is the best to discuss in this in details,” he said.

“On our side, we can look at road from Murongo to Kayanga. We can also cooperate in security fields,” he said.

President Museveni said Uganda can support Burundi to exploit the oil prospects since Uganda and Burundi have the same characteristics.

He pledged to look for investors to support Burundi’s iron ore industry.

According to the Minister of Foreign Affairs Sam Kutesa, trade between Burundi and Uganda increased from US40million dollars per annum to US59million dollars of exports from Uganda to Burundi, mainly for Iron and steel products, maize, tobacco vegetable oils and others while imports from Burundi to Uganda are US33.8million dollars largely from gold, raw hides and skins and scrap iron.