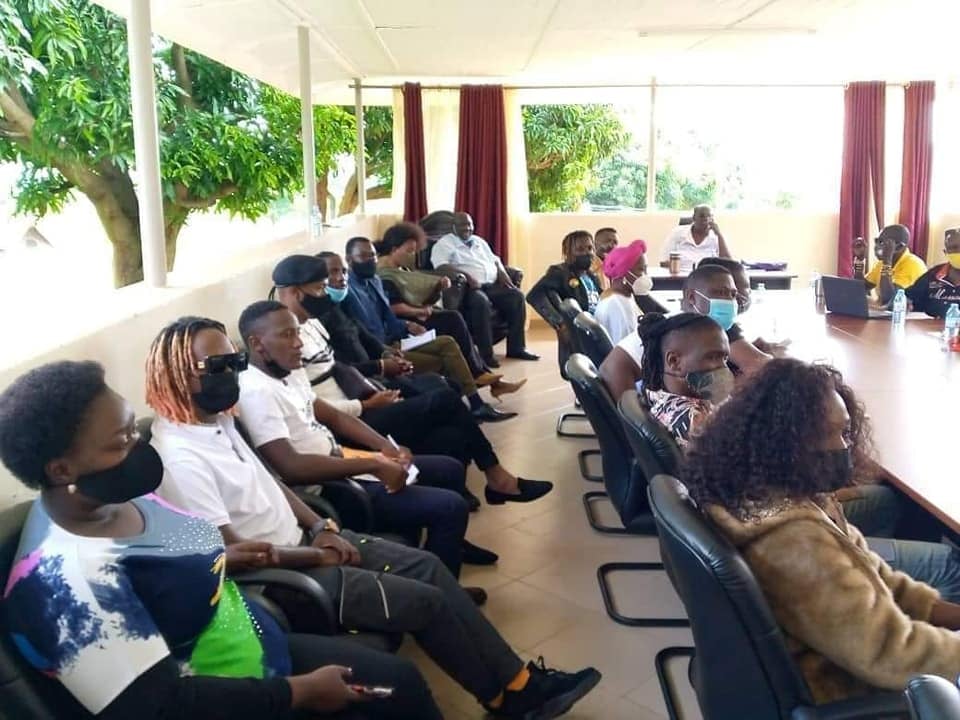 Chameleone led a team of musicians from Super stars association to meet the General, to lobby for help during the lockdown that has affected the music industry since March 2020. However, they also performed at an event in Gulu during their visit, something that did not go well with many Ugandans.

Now, Kyagulanyi says they should not settle for handouts.

Watching my fellow artistes line up themselves before #DictatorMuseveni‘s brother General Salim Saleh to beg for handouts, my mind was taken back to the story of Joseph Stalin, the Soviet dictator of the 19th century.

“Stalin once plucked off all the feathers from a live chicken as a lesson to his followers. He then set the chicken on the floor a short distance away. The chicken was blooded and suffering from great pain, yet, when Stalin began to throw some bits of wheat to the chicken it followed him around. He then said to his followers, “This is how easy it is to govern stupid people. They will follow you no matter how much pain you cause them, as long as you throw a few worthless crumbs to them every once in a while.”

This story has come to life very many times in Uganda. Museveni, like all brutal dictators appeals to two human weaknesses- greed and fear.

Those who resist greed are intimidated into submission, after which he returns and gives them a few crumbs from his loot. I am sure every artiste fully understands this, because artistes are expected to understand the things around them, even above the average citizen.

Artistes are aware that about two years ago, the regime brought very oppressive laws targeting the industry. Among the laws proposed was a requirement that an artiste must submit his or her lyrics to the minister of Gender for approval before producing any artistic work. Another ridiculous one was a requirement for artistes to get permission from the government before they are allowed to perform abroad. These regulations were never shelved. They were only put on a halt when the regime got the excuse of COVID19 to implement the control which they had hoped to achieve through the regulations.

Artistes are aware that before shows were banned on account of COVID19, I and Nubian Li were not allowed perform anywhere in Uganda. The regime made it clear that any artiste who dares to criticise its corruption and injustice was not going to be allowed to perform in this country. Several artistes including Nubian Li, Dan Magic and the Mighty family comedians just returned from Kitalya after seven months for simply associating with me and for speaking the truth. The attack on the arts has been clear for all to see.

In all this, we have seen very few artistes bold enough to stand in solidarity with fellow artistes and with the Music and creative industry. Uganda Musician’s Association (UMA), an association which we started to fight for the industry has been loudly silent about all this injustice. It was reduced to a beggars’ association.

It is very sad to see that the very person who destroyed the music industry has finally been able to make artistes bow down in humiliation to worship him. Oh what a shame!

This generation of artistes needs to remember that we have been here before. In the 1970s artistes and writers such as Robert Serumaga, John Ruganda and Okot p’Bitek fled to exile in neighbouring Kenya. Byron Kawadwa, a playwright and artistic director of the Uganda National Theatre, paid the ultimate price of death in 1977 following his critical play ‘Oluyimba lwa Wankoko’. They refused to sell their souls to dictator Idi Amin. Yet, today we celebrate them.

I know that all these artists are aware that the entire objective is to silence not just individual artistes but to water down the entire music and creative industry so that it never produces another ‘Kyagulanyi’ kind of artist that speaks truth to it’s face. The objective is to divide artistes and cause them to fight against each other because Gen. Museveni believes in the divide and rule concept. No wonder, several artistes are already up in arms questioning the methods and criteria used to select beneficiaries of the few monies dished out every once in a while. Moreover tax payers’ money!

I can only imagine the disappointment of the fans who rely on their artists to raise their voices and speak about social issues that affect them. As we speak, many Ugandans are grappling untold poverty, hunger, disease and oppression. Many of our people are dropping dead because of starvation. It is in such times that artists should rise to the occasion and speak on behalf of the millions of their fans whose voices have been suppressed and locked down. This is not a time for artist to line up before the despot and beg for a few crumbs that fall off his plunder of our nation.

Before going to meet Gen Saleh, these artists should have asked themselves these questions; 1. WHY ARE THEY NOT INVITED TO A MINISTRY RESPONSIBLE FOR THE ARTS?

2. WHAT DOES A MILITARY GENERAL HAVE TO DO WITH ORGANISING MUSIC AND THE ARTS?

3. ISN’T THIS THE SAME PLACE WHERE FELLOW ARTISTS WERE RECENTLY BEATEN AND HUMILIATED??

The deliberate destruction of institutions and the sustained plan of keeping everyone poor so that they have to beg the dictator for survival should have been clear.

But any way, its so sad that they never learn. They’re just too blind to see that they’re being used to their own detriment. It gets clearer each day that the people of Uganda are on their own- sad! I know that all hope is not lost. I encourage all well meaning artistes, especially the young, to believe in the values of hard-work and patience. Most importantly, they must resist the temptation of quick fixes from the regime, and work not only for their well being, but the well being of the people of Uganda who have made them what they are.

Ugandan Filmmaker Ruth Nazzinda Scoops Award at The African Film Festival 2021 in Dallas Texas
Supporting Creative Arts should be a matter of policy, not handouts!
Advertisement