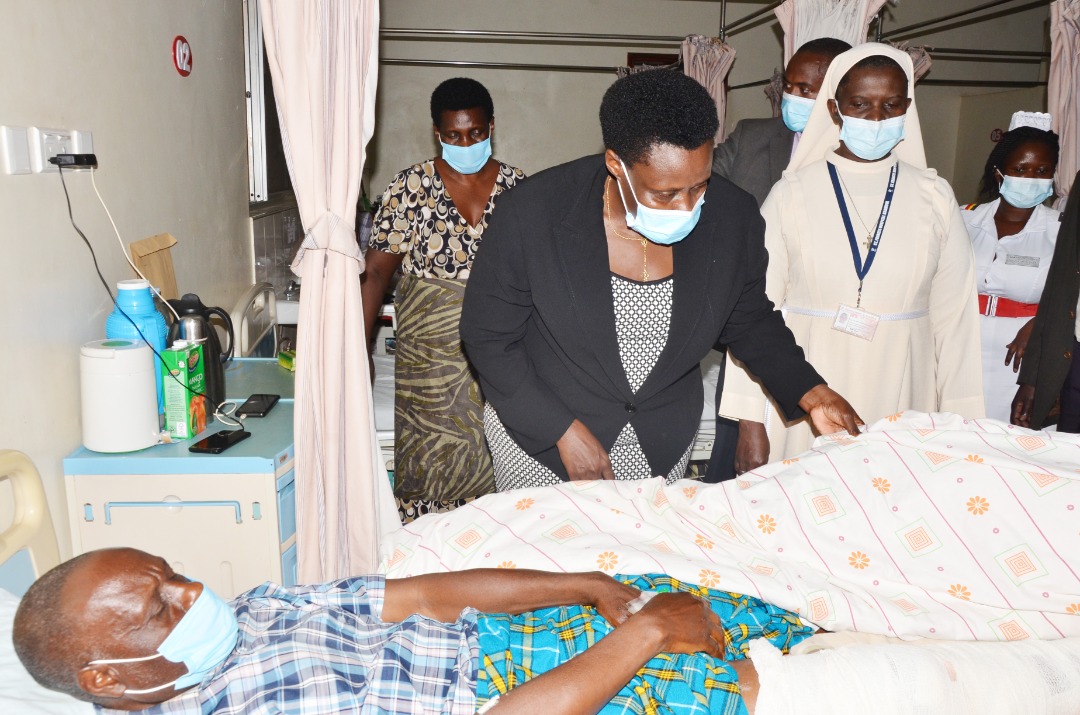 The Vice President of Uganda Maj (Rtd) Jessica Alupo has promised that terrorists who attacked Uganda, in two different bomb blasts, are cowards, and will all be defeated.

The VP made the remarks, Tuesday morning while visiting Adrian Kwetegyereza, one of the victims of the second bomb attack at St. Francis Hospital Nsambya. The attack took place last evening, on a Western Uganda-bound bus.

Kwetegyereza, who is the acting Regional Police Commander of Greater Bushenyi, survived the bomb attack, alongside 37 other passengers, when a bus belonging to Swift Safaris Bus company, under Registration Number UAU 989T, was attacked, on Monday evening. Two people are reported by Police, to have succumbed to the attack.

He sustained a double fracture in the right leg and was set for operation today morning.

At the time of the bomb attack, Kwetegyereza was on his way, to his upcountry home in Bushenyi, from the Police Head Quarters in Kampala. The Vice President also offered financial support to the family to foot some of their medical bills.

The bus attack took place hours after terrorists claimed responsibility for a bombing at a pork joint in Komamboga, a Kampala city suburb.

The Vice President also condoled with all the families of those who lost their loved ones in the two attacks.

“I do pass on my sympathies, to all those who have lost their loved ones in these bomb attacks. We will make sure we defeat all those who are killing our people,” she re-emphasized. “We will do all it takes, to secure all Ugandans and people and their property, in this country,” she added.

The Vice President, during her visit to the hospital, was welcomed by the hospital’s Administrator Sr. Mary Cleophas Kizito, the Senior Principal Nursing Officer Annet Mirembe, and the Ward in-charge Christine Muzaale Anna.