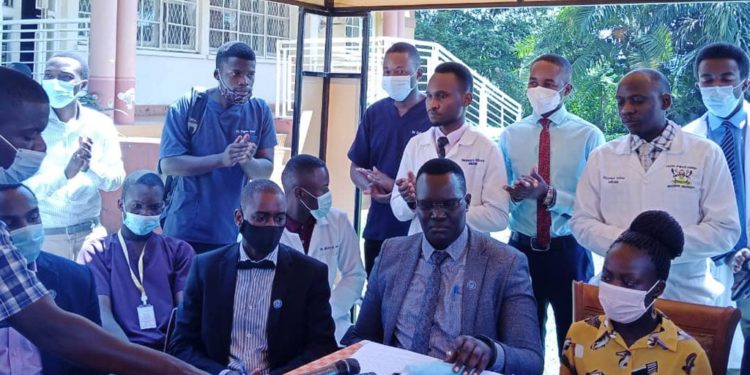 The Uganda Medical Association (UMA) executive is calling for the resignation of their president or he is impeached following a recent incident that reportedly portrayed the group as partisan.

The association President Dr. Odong Samuel Oledo was seen kneeling before President Musevni together with a group of medical students during a youth symposium held at Kololo independence grounds over the weekend.

The association Secretary General, Dr. Herbert Luswata tells KFM that they are also considering a vote of no confidence in Oledo.

“It was a gross mistake to put on our clinical coats in a political activity like that one because it means the association has been sold to NRM which is wrong, because the members are affiliated to different political parties. So the first step we have taken is try to clear the air that surely this is not a National Executive Committee activity. What he did was a mistake and against our advice as National Executive Committee,” Luswata said.

According to a press statement signed by Luswata and the association’s Vice President, Dr. Edith Nakku, Oledo represented himself at the mentioned symposium.

MPs Ssegirinya, Ssewanyana To Spend Their Second Christmas In prison As Case Is Pushed To February 2023
President Museveni receives special message from the King of Morocco
Advertisement