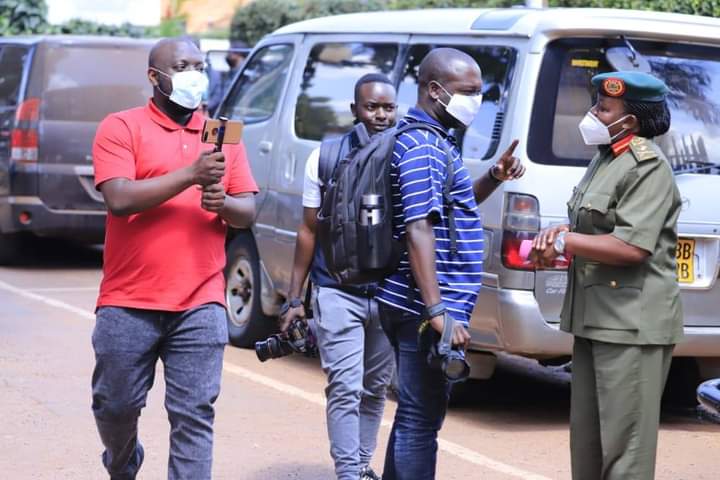 Journalists have on Monday walked away out of a security press conference in protest of continued harassment by security forces during presidential campaigns.

The move comes just a day after Ashraf Kasirye a cameraman with Ghetto media was shot at during a National Unity Platform campaign procession at Kyabakuza Masaka.

According to the NUP campaign team, Kasirye’s skull was affected and by Monday morning he was still in the ICU following surgery on his head.

While eyewitnesses say Kasirye was shot with a bullet, police issued a statement claiming he was injured by a teargas canister.

Meanwhile several other journalists were injured in the same fracas including Daniel Lutaaya from NBS and NTV’s Ali Mivule who accused the Masaka RPC Enock Abaine of calling him collateral damage, before aiming a teargas canister at him.

After the incident, the Chief of Defense Forces Gen. David Muhoozi called a press conference that was slated for 10:00am on Monday. However, no sooner had the speakers opened the microphones, than the journalists picked their cameras, recorders among other gadgets and walked away.

Meanwhile, security had heavily deployed at the Uganda Media center where the presser was supposed to take place. When asked why they had deployed heavily, Brig. Flavia Byekwaso the UPDF spokesperson said there was a misunderstanding within security that reporters planned on attacking senior security officers.

Journalists accused security forces of being partisan and choosing to batter those on the opposition campaign trails.

“When we report about President Museveni and the NRM at large, we are good journalists. But when we cover the opposition, we are biased” one journalist said.

They told Brig. Byekwaso that their job is to report News and not support any politicians over others.

The minister of Information and National guidance Hon. Judith Nabakooba says government respects the work of journalists and will meet them to smoothen relationships with security forces.