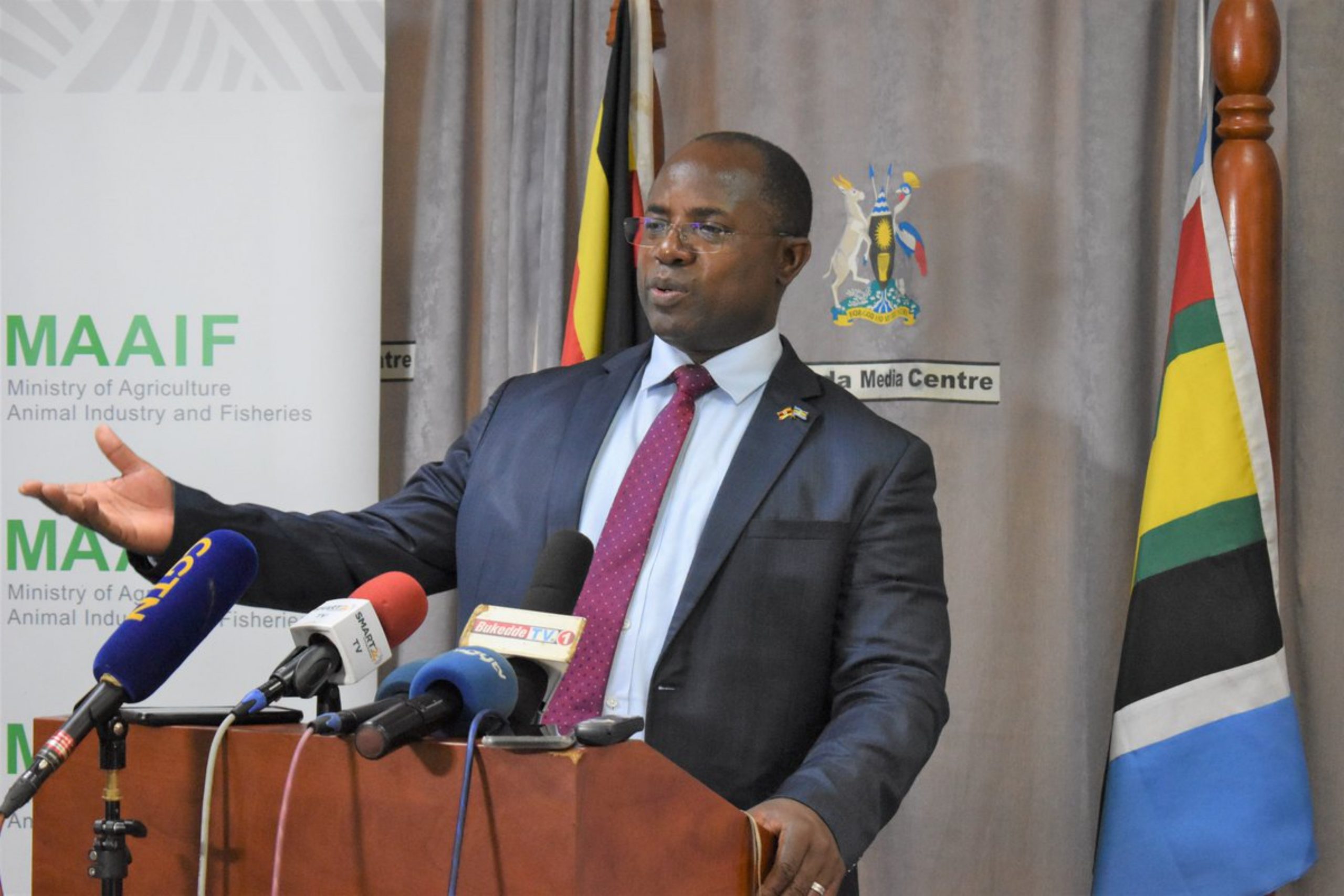 Uganda will on Thursday, October 13th, 2022 hold a Policy Dialogue Session ahead of this year’s WORLD FOOD DAY National Celebrations which will take place at the National Crop Resources Research Institute (NaCRRI) in Namulonge on Sunday, October 16th, 2022.

The event on Thursday will discuss the various issues surrounding interventions by government and private actors towards the transformation of the sector for; better production, better nutrition, a better environment and a better life.

According to the Minister of State for Agriculture Hon. Bwino Fred Kyakulaga, WORLD FOOD DAY is an international event celebrated every year under different themes. The theme for this year is “Leave no one behind: Better production, better nutrition, a better environment and a better life.”

Speaking at Uganda media centre on Monday morning, Minister Bwino noted that this year’s theme recognizes the need to develop inclusive, resilient and sustainable agri-food systems. “This, therefore, calls for action across the sector players to ensure that our agri-food systems deliver enough, affordable, nutritious, and safe food for all in a better environment for a better life. It also creates awareness among the general public about the need to prioritize agriculture and practice it as a business,” he said.

The minister added that as Ugandans celebrate this day, they should recognize the fact that as the government works towards zero hunger by 2030, there are people in the country who still experience food insecurity and malnutrition thereby affecting their quality of life and overall outcomes.

“According to the Integrated Food Security Phase Classification (IPC) released by Government (OPM), FAO and WFP in June 2022, in Karamoja sub-region for instance, the impact of ongoing average to below-average food and livestock production over the last two years, coupled with the recent fluid security situation in Karamoja are causing food insecurity (affecting about 40% of the population) in this sub-region,” Bwino explained.

He noted that in Uganda, Agri-food systems transformation is a key driver for socio-economic transformation, and as such it is imperative that the country takes advantage of these celebrations to take stock of developments and commitments made to make food and animal feed available, affordable, and nutritious in order to foster sustainable development and prosperity for all.

In this regard, Hon Bwino says that MAAIF through the Parish Development Model (PDM) is working towards liberating farmers who are still stuck in subsistence (39.5%) and graduating them to commercial agricultural production, so as to raise family gross income to at least shs.20, 000,000 per year. “This effort is also emphasizing the issue of Food, animal feed and nutrition security to this category of Ugandans. The commodities being promoted under this effort are; Coffee, Poultry for eggs, Zero grazing for dairy, piggery, Fish Farming and Food/ animal feeds.”

This initiative, the minister says is being implemented this planting season by the Uganda Prisons Service, National Enterprise Cooperation (NEC), UPDF, NARC), and NAGRIC &DB. In the next planting season, the effort will be rolled out to private large-scale farmers across the country.

MAAIF is further implementing the Multi-Sectoral Food and Nutrition project in the Eastern, Central, Western and West Nile regions to promote the growth of crops loaded with micronutrients using primary schools as entry points to the community.

In the medium term, Bwino says his ministry will continue to pursue policies and interventions that promote food import substitution and access to premium markets for food export. Here commodities being targeted include Macadamia, Hass Avocado, Cashew Nuts, oil palm, vegetables and fruits.

“Colleagues, as you are aware, agriculture remains the mainstay of Uganda’s economy and our efforts both public and private should be directed at promoting sustainable investments in the sector to increase incomes, provide employment to the youth, food security and wealth creation. It is worth noting that the country remains a food basket for the region,” the minister added.

That said, however, the minister says that the sector still faces a number of challenges at the different stages of commodity value chains. Key among these are; Reliance on rain-fed agriculture, Low-value addition to agricultural produce, Low level of mechanization in agricultural operations, High occurrences of pests and diseases and a Relatively underdeveloped agro-processing industry. These challenges he says are exacerbated by the impacts of land fragmentation and climate change.

He applauded the development partners and all other stakeholders who have supported government efforts in addressing these challenges in addition to the fighting against hunger, Malnutrition and advocacy for healthy living.

“Special thanks to the Food and Agriculture Organization (FAO), World Food Program (WFP), other Development partners, Civil Society, Non-State Actors, other MDAs and the media for the support to the agriculture sector,” Hon Bwino said.

UNICEF receives USD1.5 million from government of Japan for immunisation
Minister calls for better protection of women and girls against HIV
Advertisement