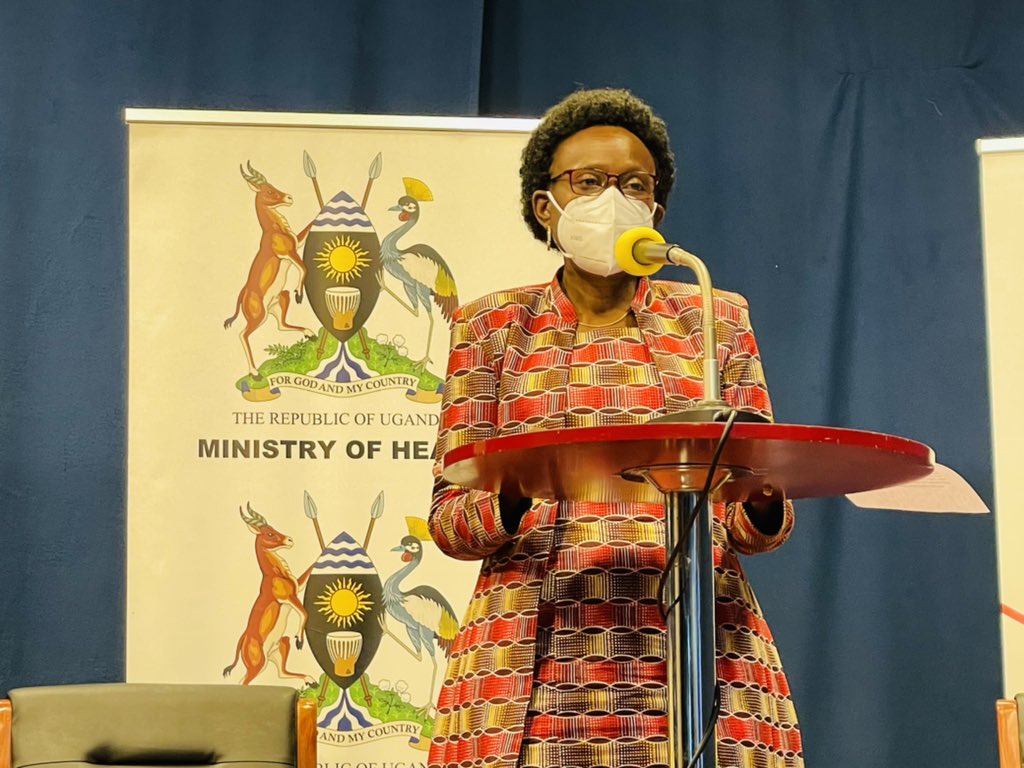 While addressing the nation about the pandemic this Friday morning, Health Minister Jane Ruth Aceng noted that the positivity rate has consistently remained below 5% for two weeks in succession; the highest being 4.9% and lowest being 0.8; on average 2.5% which translates into “under control” as per our national resurgence threshold.

She announced that Uganda is fully out of the ‘Third COVID-19 Wave’ as seen in the significant drop in cumulative confirmed cases, marked reduction in positivity rates and deaths.

“In the past three weeks, the country has registered reduced transmission rates across all districts. We have observed improvements in the number of districts having intense transmission. Currently, there is no district in the response phase and only 3 in the alert phase of the pandemic having attack rates between 10 to 30 per 100,000 populations. These are Moyo (West Nile region), Mpigi, and Kampala (Central sub-region),” the Minister said.

She also explained that the key drivers of transmission in these sub-regions hinge mainly on the local socio-economic factors affecting preventive measures; community perception that COVID-19 is no longer serious since the numbers have reduced and the economy is fully opened and being unvaccinated

“For the two weeks (from Jan 23rd-Feb. 5th 2022), about 43% of those who died were admitted in a severe state while 10% were in critical condition. These deaths are majorly attributed to delay or late referral to the CT Us, being unvaccinated (48%), and the elderly (>60 years). These observations indicate that the vulnerable populations continue to die even though Omicron is a mild variant, and further highlights the continued uncertainty posed by COVID-19,” says Minister Aceng.

Meanwhile, in light of the uncertainties posed by COVID-19 and the possibility of a new variant emerging, Aceng says her Ministry will continue to strengthen surveillance for monitoring the circulating variants, prioritize and intensify genetic sequencing of cases on admission, death, and those identified in the community for earlier detection of new and emerging variants and proactively identify the vulnerable population including children with co-morbidities for vaccination.

In the Cabinet sitting of Monday 14th February 2022, it was resolved to temporarily suspend testing on arrival at Entebbe International Airport until when Ministry of Health reports an alert situation.

However, the minister says requirements of pre-exit and pre-entry testing done within 72 hours for outgoing travelers and incoming travelers remains. Health workers will remain at the airport to carry out the screening.

This decision was premised on the decline in positive cases identified at the airport. Since the institution of mandatory testing on arrival at the airport on the 23rd October 2021, Aceng says 153,393 travelers had been tested by 2nd February, and 4,152 tested positive.

However, from 20th January 2022 to 2nd February 2022, a total of 18,048 travelers had been tested and 229 tested positive giving a positivity rate of 1.27%. The positivity rate is currently very low and in line with the national positivity rate.

“Currently, it appears there is minimal threat of new variant(s) of concern (VOC) and therefore reduced risk of importation. However, the Ministry of Health and the WHO country office will remain on high alert, and in the event that any threat is detected, testing will be promptly re-instituted,” says Dr. Aceng.

At the land borders, all truck drivers at Malaba and Busia borders are still allowed to proceed without Covid-19 testing until the current crisis and trucks backlog is cleared.

However, the border point at Katuna was opened after these resolutions were made. Currently, movements at the Katuna border are limited to cargo with the requirement of a COVID-19 test done 72 hours before crossing.

Uganda has so far received 37,251,220 doses of various COVID-19 vaccines. An additional 8,906,130 doses of vaccines are in the pipeline and will be received in due course.

She appreciated the population for embracing the COVID-19 vaccination exercise and contributing to the success in the response. But noted that it is important to continue observing the Standard Operating Procedures and encourage all those who have not yet been vaccinated to get their jab.

The Minister also insisted that all persons aged 50 years and above and have completed 6 months since the 2nd dose of the vaccine must get their booster dose.