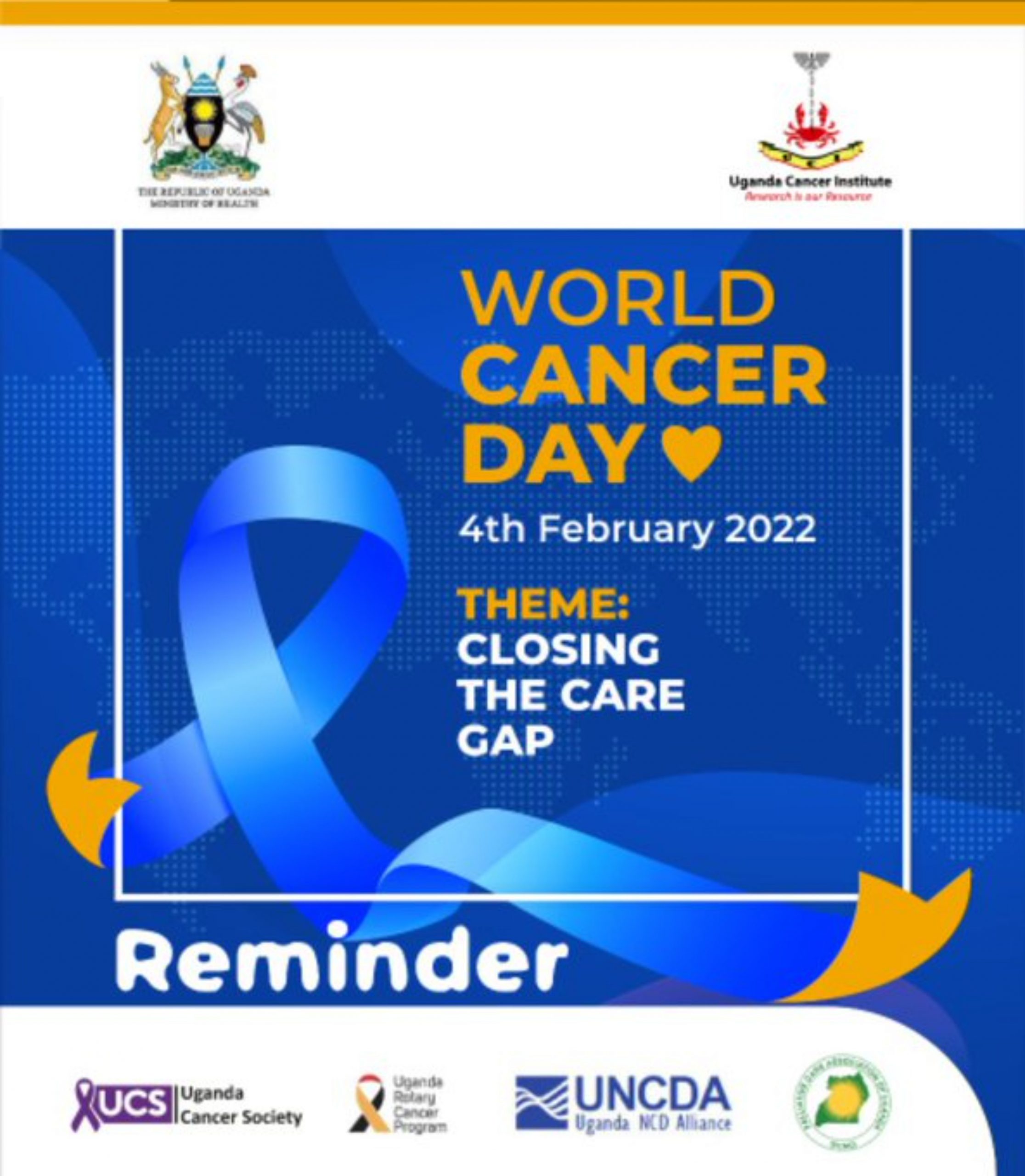 Uganda Cancer Institute has Friday joined the rest of the world to commemorate World Cancer Day.

Every year, 10 million people around the world die from cancer. This is more than HIV/AIDS, malaria and tuberculosis combined. These figures are also likely to shoot up if humans don’t take action.

According to Christine Namulindwa the Public Relations OfficerUganda Cancer Institute, they are committed to providing greater access to care for people and closing the gap in cancer care through reaching out to the population.

“Closing the care gap” is the theme of the new three-year campaign for World Cancer Day, one of the most important health awareness days in the year led by the Union for International Cancer Control (UICC) to which UCI subscribes to promote greater equity in health care provision for all populations.

She noted that the campaign exposes significant barriers related to socioeconomic factors that prevent many people from accessing life-saving prevention services, diagnostics, treatment and care.

These barriers she says, are due to cultural contexts, geographical location, gender norms, income and education levels and discrimination or assumptions based on age, gender, ethnicity, disability and lifestyle – and they lead to wide discrepancies in the risks of developing and surviving cancer.

“More than 80% of cancer patients registered at the UCI present with late-stage disease thus leading to a high mortality rate among adult cancer patients. This situation can change if these people are screened early and the right treatment is given. However, the late presentation hinders this” said Namulindwa.

She noted an example of breast cancer, where the chances of surviving it can be above 90% if a woman is screened regularly and the cancer is detected in the early stages.

Namulindwa however says that women living in rural areas face long distances to travel to a care centre that provides screening and must often take time off work or find support for childcare in order to do so. This means that she only presents when cancer has advanced enough and becomes difficult to treat.

However, having noted such barriers to care, the Uganda Cancer Institute is taking on a nationwide approach to improving access to care for all through establishing regional cancer centres.

These centres are being established in Gulu, Arua, Mbale and Mbarara. This means that individuals will be receiving holistic treatment in their regions without having to travel to Kampala for care; something that has been causing delays in treatment.

The Uganda Cancer Institute with funding from the Government of Uganda is also expanding care infrastructure at the Mulago campus with the construction of a new 8-level inpatient building, a two-block six-level ADB funded building that will house facilities for reference cancer laboratory, MRI, cancer surgical suites, outpatient clinics, ICU among many other facilities to improve patient care.

Many Ugandans go abroad for PET scans and the government of Uganda has provided funding to the Uganda Cancer Institute to establish a PET centre this financial year.

The government of Uganda has further secured funding to construct the Northern Uganda Regional Cancer Centre in Gulu which will be operational next financial year.

The Western Uganda and West Nile centres are already operational and the government has promised additional funding to construct all the three remaining centres (Gulu, Arua, Mbarara). These will significantly reduce the distances travelled by patients seeking care and close some of the gaps in cancer care. All care at the UCI is provided free such that economics is not a determinant of treatment outcomes, and with the functionalization of the regional cancer centres, even geography will cease to be a factor.

Dr Cary Adams, CEO of UICC says: “As individuals, as communities, we can and must come together and break down barriers. We have achieved a lot in the last decade in cancer care and control around the world but not addressing inequities in society is slowing our progress. Closing the care gap is about fairness, dignity and fundamental rights to allow everyone to lead longer lives in better health.”

World Cancer Day takes place every year on 4th February and is the uniting global initiative under which the world comes together to raise the profile of cancer in a positive and inspiring way. Spearheaded by the Union for International Cancer Control (UICC), the day aims to save millions of preventable deaths each year by raising awareness and improving education about the disease while calling for action from governments and individuals across the world.

World Cancer Day 2022 is being commemorated under the theme “Close the care gap”, recognizing the power of knowledge and challenging assumptions.

This first year of a new three-year campaign on equity raises awareness about the lack of equity in cancer care and barriers that exist for many people in accessing services and receiving the care they need.