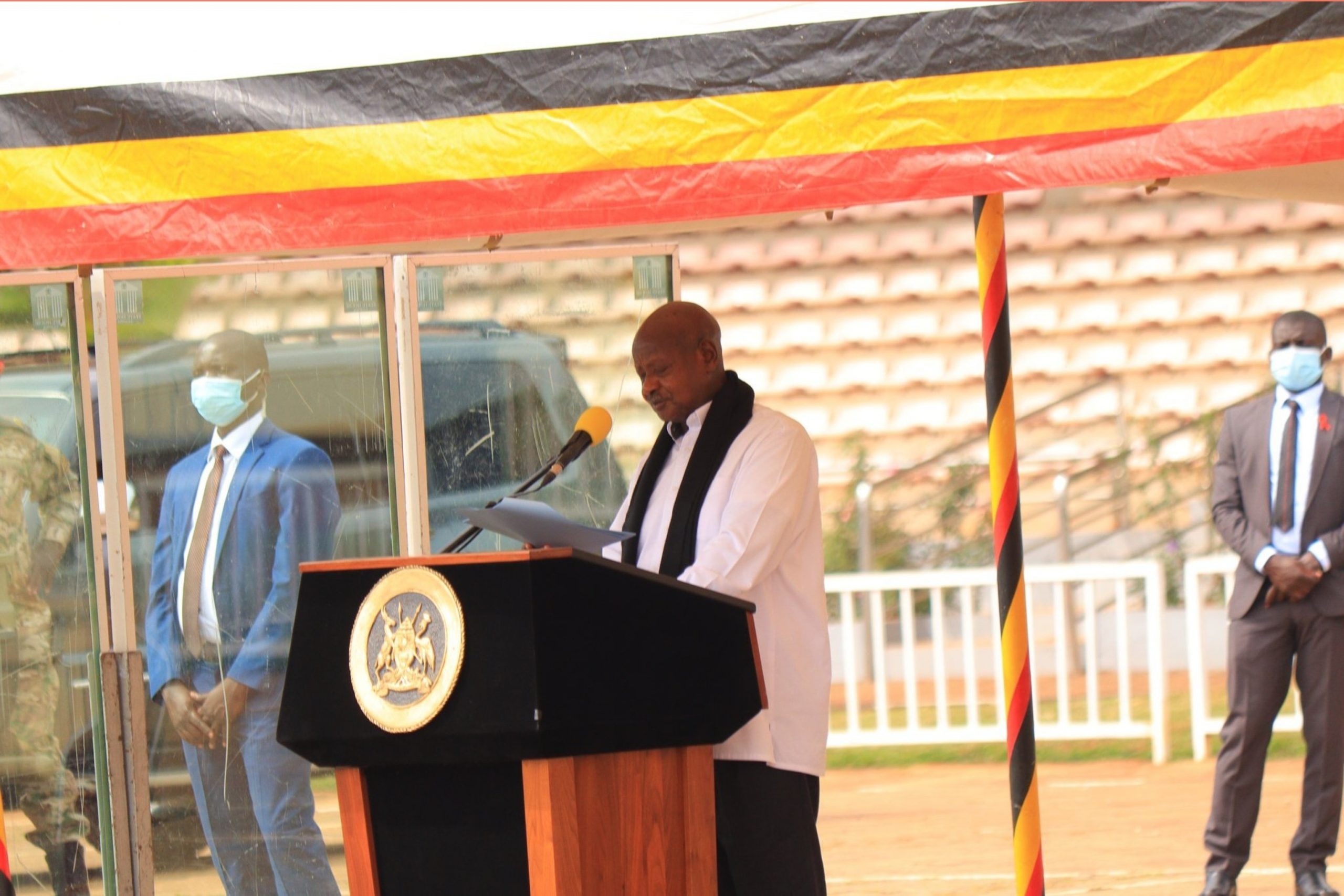 Your Excellency, the Vice President;

Your Lordship, the Chief Justice;

Your Lordship, the Deputy Chief Justice;

Your Excellencies Ambassadors and High Commissioners; All the Workers and Employers; Ladies and Gentlemen.

I join the Workers of Uganda and the rest of the world to celebrate International Labour Day. I congratulate all the Workers and Employers for their contribution towards Uganda’s development, especially after the disruptions caused by COVID-19.

This year’s celebrations are being held under the theme: “Mitigating the impact of COVID-19: Enhancing Productive Employment for Improved Livelihoods through the Parish Development Model.” This theme highlights the key role of the Parish Development Model in eliminating subsistence agriculture, which accounts for the poverty in 39% of Uganda’s households. Subsistence agriculture is unproductive because it holds people in working for the stomach only- ekida kyonka.

The Parish Development Model is aimed at producing for the market. It will enhance job creation, increase production, improve incomes and speed the vision of transforming Uganda from a peasant to a modern, industrial and prosperous society by 2040.

Government will support a SACCO in each of the 10,595 parishes in Uganda with Uganda Shillings one hundred million, putting emphasis on the rural areas engaged in agriculture. Members can borrow from the parish SACCO to support their productive and income-generating activities.

This will create a pool of funds near the households – at each parish in Uganda. It will solve the problem of limited access to credit for the households and increase production of agricultural commodities for the domestic and export market. With increased production, Uganda’s exports will need access to bigger markets at the regional and continental level. This is why economic integration of Africa’s market of 1.2 billion is important. All barriers on the free movement of goods and people must be removed.

It will further strengthen collaboration with our brothers and sisters in Congo.

The DRC is one of Uganda’s strategic trade partners.  Uganda earned close to US$418 million in trade with the DRC, despite the poor road network and insecurity in Eastern Congo.  To increase the volume of trade between Uganda and the DRC, we have embarked on the construction of the following regional connectivity roads in DRC:

The  NRM Government has put in place the necessary economic and social infrastructure to ensure labour productivity. The patriotic fighters of the NRA have enabled Ugandans to enjoy unprecedented peace, stability and security. The peace dividends can be seen in every part of the Country as more Ugandans engage in various economic activities without fear of loss of their lives, money and property.

The quality of Uganda’s labour force has improved. The earlier interventions in health and education have improved Uganda’s human development indices. The mass immunization campaigns against the killer diseases increased the life expectancy of Ugandans from 47 years in 1986 to 64 years today. As a result of these robust measures, the last four (4) cases of Polio were reported in Uganda in 2010. It is only recently in June, 2021, that the alert scientists in Uganda discovered the Polio virus in two samples collected from the Bugolobi Sewage plant and Lubigi.

Despite the discovery of these traces of the polio virus in the samples from Lubigi and Bugolobi, no case has been reported.

With the introduction of Universal Primary Education and Universal Secondary Education, we have been able to increase access to education. Therefore, Uganda has a healthy and educated manpower to achieve and maintain its economic growth goals

The prioritization of public infrastructure projects has created a favourable economic environment to attract investments by lowering the costs of doing business.  Since 2006, Government has prioritized construction of roads and increasing electricity supply. Over the last five years, Government has been spending about 17% of the budget on infrastructure development. Most notably, Government upgraded the following roads from murram to tarmac:

The improvement of the road infrastructure has opened up the Country; thus, linking areas that were hard-to-reach to the domestic and international market.

Electricity generation has increased ten-fold from 150MW in FY1986/87 to 1,250MW in 2020. The generation capacity is expected to increase from the current 1250MW to 2000MW by the end of this year. To ensure power remains cheap, especially for industrial consumers, electricity to Industrial Parks like Namanve must be delivered direct without going through third parties. Third parties increase the cost of power.

Therefore, the remaining task is utilizing the existing socio-economic infrastructure to generate jobs and wealth for the households.

I call upon all Ugandans to embrace the Government initiatives aimed at eradicating subsistence living in Uganda.

Finally, I congratulate all the workers and wish you peaceful celebrations of the International Labour Day.