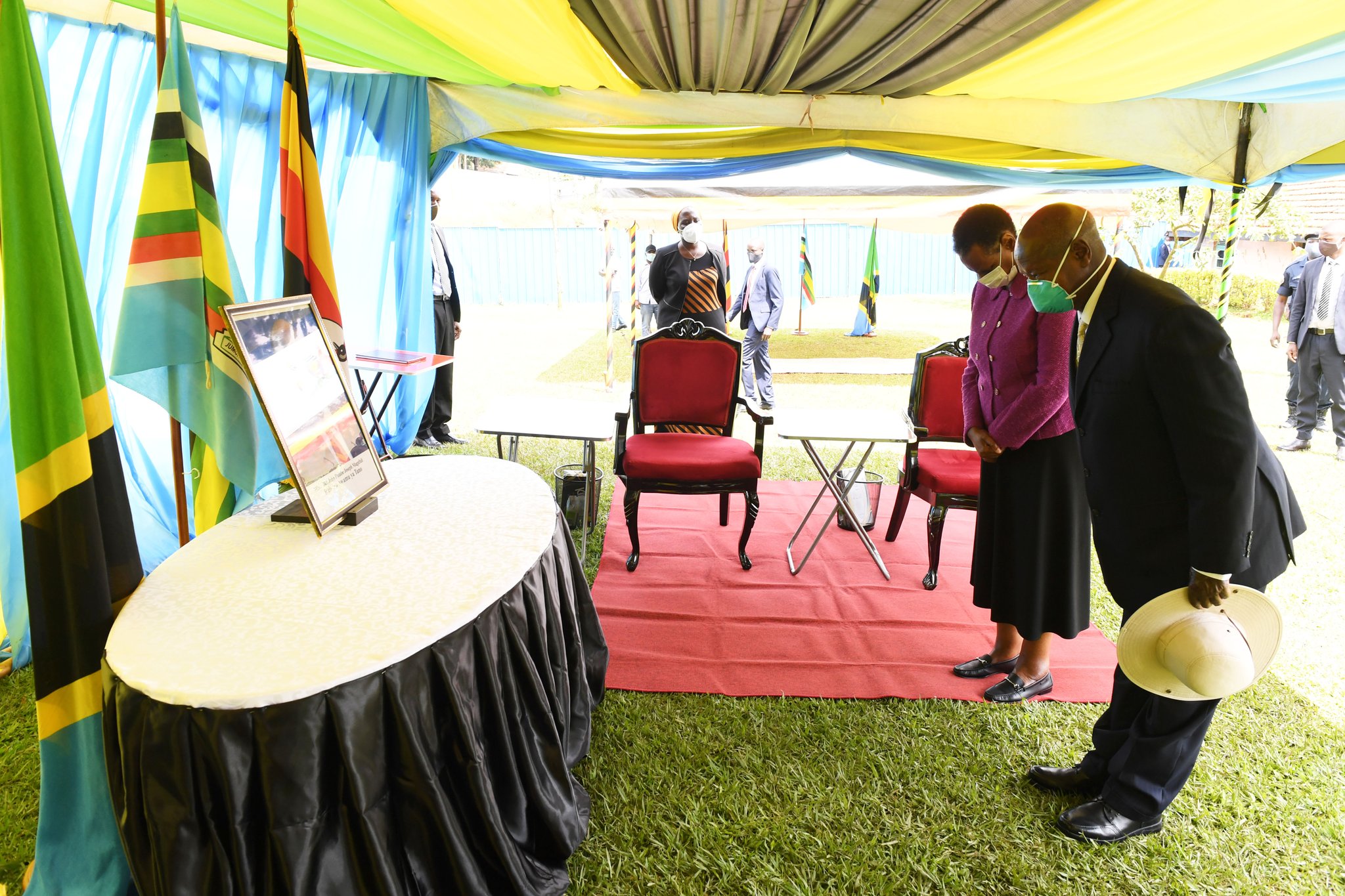 The Head of State, President Yoweri Museveni has described fallen Tanzanian leader, President John Pombe Magufuli as a dedicated servant not only to the people of Tanzania but also to the people of East Africa and Africa, challenging all those who are still alive to continue with the struggle started in the past by the freedom fighters.

“It is a challenge for those who are still alive to continue the struggle as we did in the past because when we lost our comrades we never gave up. And because we never gave up, we succeeded and even this time we shall succeed,” he said.

The President and the First Lady who is also Minister of Education and Sports Mrs. Janet Kataha Museveni were today paying their respects to the late President Magufuli who died last Wednesday from heart complications at a hospital in Dar es Salaam.

The two principals later signed a condolence book at the High Commission of Tanzania in Uganda.

During the ceremony, President Museveni disclosed that the signing of the tripartite accord between Uganda, Tanzania and Total oil company was to be done on the same day, Monday 22nd March in Entebbe. He said in his missive to H.E. Magufuli he had on a light note informed the late that the signing of the tripartite accord would be a double military and economic victory.

“Because about 42 years ago, the Tanzania Peoples Defense Forces together with our freedom fighters, with me present defeated the army of Idi Amin at Rugando about 12 kilometers from Mbarara on Kabale road. Little did I know that today I would be signing a condolences book,” he said.

President Museveni said that the demise was a great loss, so sad and unexpected and pointed out that as freedom fighters they had learnt how to deal with such challenges.

He said the death of some of the great sons of Africa who passed on like Mondlane, Samora Machel, Agustino Neto, Herbert Kitepo, Oliver Thambo, Mwalimu Nyerere, Amical Cabral and John Garang will never stop them from going forward.

“The challenge now is that those who are living continue the struggle,” he said.

He said he was following events unfolding at Dodoma Stadium where the people of Tanzania are paying their last respects to the late President Magufuli.

“It is such a great loss, because I could see how sad the people of Tanzania were, the ones who have been flocking the Stadium to say good bye to him,” he said.

President Museveni once again extended his heartfelt condolences to the people of Tanzania, East Africa, Africa, Chama Cha Mapenduzi (CCM) and to the family of His Excellency John Magufuli.

He prayed to the Almighty God to Rest His Soul In Eternal Peace.