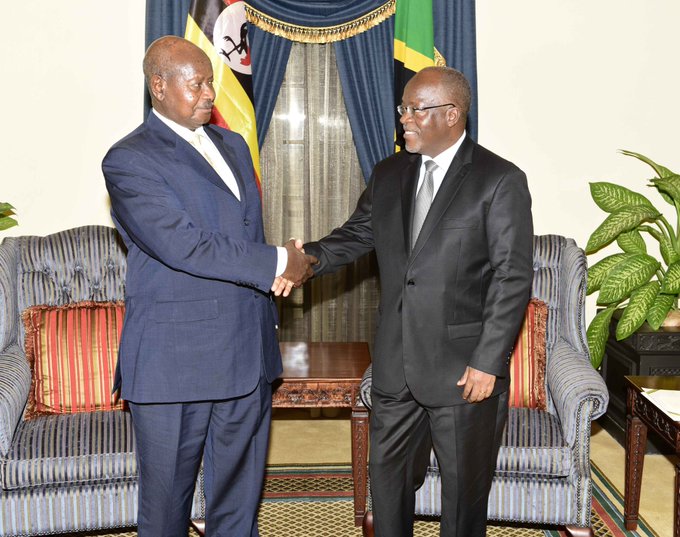 H.E Magufuli reportedly suffered heart complications. In his message on Twitter, President Museveni described him (Magufuli) as a pragmatic leader who believed in and worked for economic empowerment of East Africans.

“I have with great sadness, learnt of the death of His Excellency John Pombe Magufuli. He was a pragmatic leader who believed in and worked for the economic empowerment of East Africans. We join Tanzanians in mourning the passing of a great son of Africa. May his soul rest in peace” President Museveni tweeted.

His Alliance for National Transformation, ANT countertpart Gen. Mugisha Muntu noted that it was a dark day for East Africa having lost the President. “It’s a sad and dark day for East Africa. Our hearts, thoughts and prayers go out to our Tanzanian sisters and brothers, and the late president’s family. Rest well H.E. John P. Magufuli” Muntu noted.

Meanwhile, the DP President Norbert Mao prayed that the virus should not define a leader who boosted the economy and multiplied infrastructure. “The bard said it best: “The evil that men do lives after them; the good is oft interred with their bones.” Let not a virus define a leader who boosted the economy, multiplied infrastructure a hundredfold & tackled wasteful spending. The President is dead. Long live the President!” Mao saying.

Adding that; “Rest In Peace H.E. John Pombe Joseph Magufuli. May the Almighty God receive you and judge you with mercy as you approach the Throne of Grace”.

The opposition FDC party noted that a good heart has stopped and a good soul ascended to heaven.

“A good heart has stopped beating, a good soul ascended to heaven.

Our heartfelt condolences go out to Chama Cha Mapinduzi and all citizens of Tanzania. We will surely miss the presence of a true Pan-African leader!” the party said on its Facebook page.