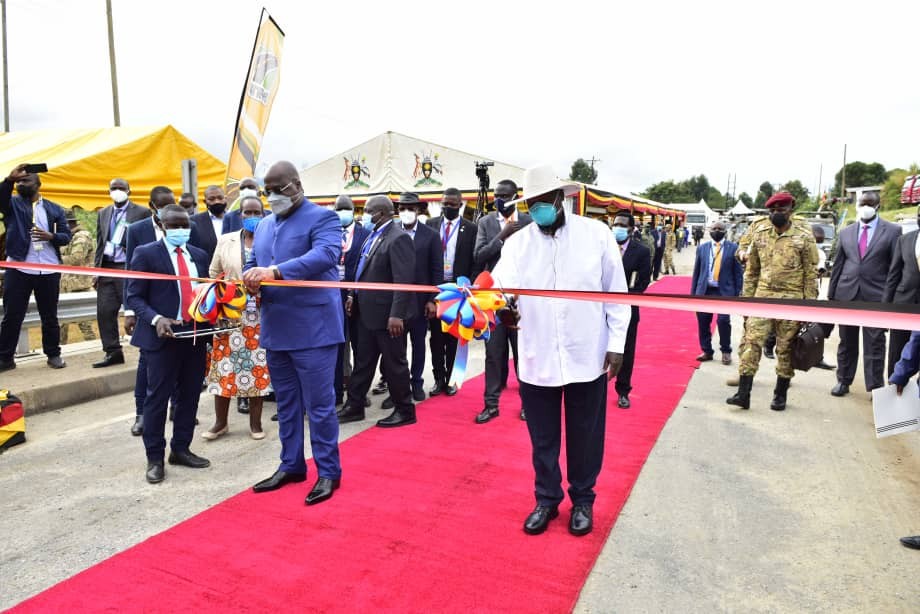 His Excellency Yoweri Kaguta Museveni, President of the Republic of Uganda and his Democratic Republic of Congo counterpart, His Excellency Felix Antoine Tshisekedi Tshilombo, have in the presence of a delegation comprising of H.E. Alexis Gisaro Muvunyi, Senior Minister of Infrastructure and Public Works and Lt. Gen. Ndima Kongba Constant, Governor of North Kivu Province as well as other Senior Government Officials to the Ground Breaking Ceremony of the road infrastructure at Mpondwe in Kasese District in the Republic of Uganda and Kasindi in North Kivu Province in the Democratic Republic of Congo.

The two Heads of State exchanged views on bilateral, regional and international issues of mutual interest.  They reiterated their commitment to promoting trade, investment and common infrastructure as well as deepening integration among the peoples of the African continent.

They stressed the importance of strengthening cooperation in different sectors including; security, infrastructure connectivity, energy, trade and investment, health, management of transboundary water resources, petroleum and minerals with the view to promoting peace, stability and prosperity of the two countries.

The Heads of State recalled the State Visit to Uganda by His Excellency Felix Antoine Tshisekedi Tshilombo, President of the Democratic Republic of Congo which took place from 9-10 November 2019 and welcomed the progress made in the implementation of the decisions agreed upon during the Visit.

The two Heads of State applauded the signing of the Inter- Governmental Agreement (IGA) and the Project Development Agreement (PDA) concerning the joint implementation of the road infrastructure project covering the Mpondwe/Kasindi-Beni Road (80 kilometers); the Bunagana-RutshuruGoma Road (89 kilometers); and the Beni-Butembo Axis (54 kilometers) on the territory of the Democratic Republic of Congo on 27th May 2021 at State House, Entebbe.

In a Ground- Breaking Event, the Heads of State commissioned the construction of the road infrastructure between Uganda and the Democratic Republic of Congo and underlined that this historical event, will cause a tremendous change in the socio-economic transformation of lives of the two peoples. They directed the Contractor to execute the construction works in a timely manner.

They directed that preparations for the construction of the Nebbi- Goli- Mahagi- Bunia road (190 kilometers), Bunia- Bogoro- Kasenyi road (55 Kilometers) and Rwebisengo-Budiba-Buguma-Njiyapanda road including the Budiba Bridge across River Semuliki (49 Kilometers) be undertaken as soon as possible.

The two Heads of State exchanged views on the security situation in the region especially in the Eastern DRC and stressed the need to maintain peace, security and stability in the region. In this regard, they reaffirmed their willingness to combine their efforts to neutralize negative armed groups destabilizing the region.

His Excellency Yoweri Kaguta Museveni expressed gratitude to His Excellency, Felix Antoine Tshisekedi Tshilombo, President of the Democratic Republic of Congo and his accompanying delegation for honouring the invitation to the Ground – Breaking Ceremony for the commencement of the construction works.

His Excellency, Felix Antoine Tshisekedi Tshilombo, President of the