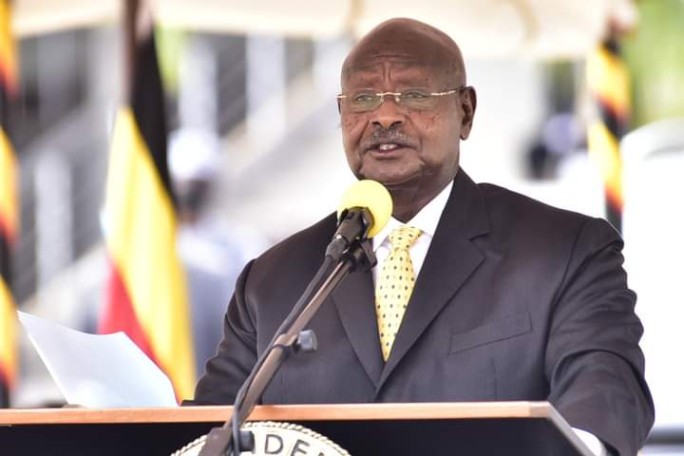 President Yoweri Museveni has said that the shooting at the vehicle of Gen. Katumba Wamala has exposed the poor organization in the police Force.

The President revealed this on Friday afternoon while delivering the State of the Nation Address to the new members of Parliament at Kololo.

While commenting on the incident that happened on Tuesday this week, when unidentified gunmen intercepted Gen. Katumba’s vehicle and spread it with bullets killing two people instantly, Mr. Museveni said the cameras he put in place are doing a great job, but the monitoring team of police is a mess.

“The cameras I put in place did their work as you saw the killers were running from one area to another area, why didn’t the camera centre alert all the patrol cars and even the UAVs (we have them and they can follow you anywhere once they are deployed), to chase and block these killers? No, these wonderful camera managers think that their gadgets are only for storing videos for forensic analysis as part of the postmortem of the operation” the President said.

He noted that while indeed the cameras are for forensic, but that they should also be used to make an alarm in case of such an attack, like what happened on Tuesday.

“Wuuyo wuuyo wuuyo, that’s what the cameras should do, they should be watching and if something like this happens, you follow them on the camera. So why don’t they make an alarm while the crime is going on? They are just sitting in their command centre there watching” the president wondered.

He said the cameras are there but are not being fully used. The president said that even though the criminals had covered their faces, they will be caught.

According to President Museveni, security has already identified the gun using in the Tuesday crime as the same one used in the killing of Maj. Kiggundu.

Museveni however says that the killers were arrested and later released by Courts of law on bail, wondering why the Courts would release murderers. He noted that if things remain like this, the army will start shooting and killing the thugs and they won’t have a story to tell.

“Why someone who has killed people should be released on bail, I cannot understand, bail for what? These people want to turn our army into a criminal army, because if they go on arresting and you release them, next time they will just kill them. This criminal was running away and we killed him. He will not be there to tell the story” the president noted.

He added that the police abandoned the use of radios and now use mobile phones which are unreliable. He noted that this happened during the regime of Gen. Kale Kayihura as IGP. He says a mobile phone communicates to one person, why a radio message is received by everyone.

“Police work on a network, it is like a village where you make ‘Enduuru’, because when you make enduuru, the whole village wakes up. The camera people when they are watching and they see something like that, they should shout and say, wuuyo wuuyo wuuyo and then everybody should be on the same network hearing. Not looking for the DPC who is asleep, we don’t need the DPC but the people on duty. Henceforth, police is directed again to stop using mobile phones, and go back to using radios that are open to all stations so that they can act promptly in emergencies like the one of Gen. Katumba” the Commander in Chief directed.

He noted that in addition to the cameras, security agencies are working on installing digital monitors in all motor vehicles and motorcycles so that wherever the officers go, the command post can know.

“I know some people want to hide where they are going for some simple reasons, but please, we have got very serious issues we are dealing with. You will have to forgive us” he noted.

He revealed that Gen. Katumba and Gen. Tumwine were the people working on this system. He warned that if anyone attempts to tamper with it, the command post will know. The technology will also work on the boats.

“The country is secure, these people who were involved in the Katumba incident, I’m sure we shall get them, because we already have good leads. We shall get them, and I am following very closely” the President revealed.