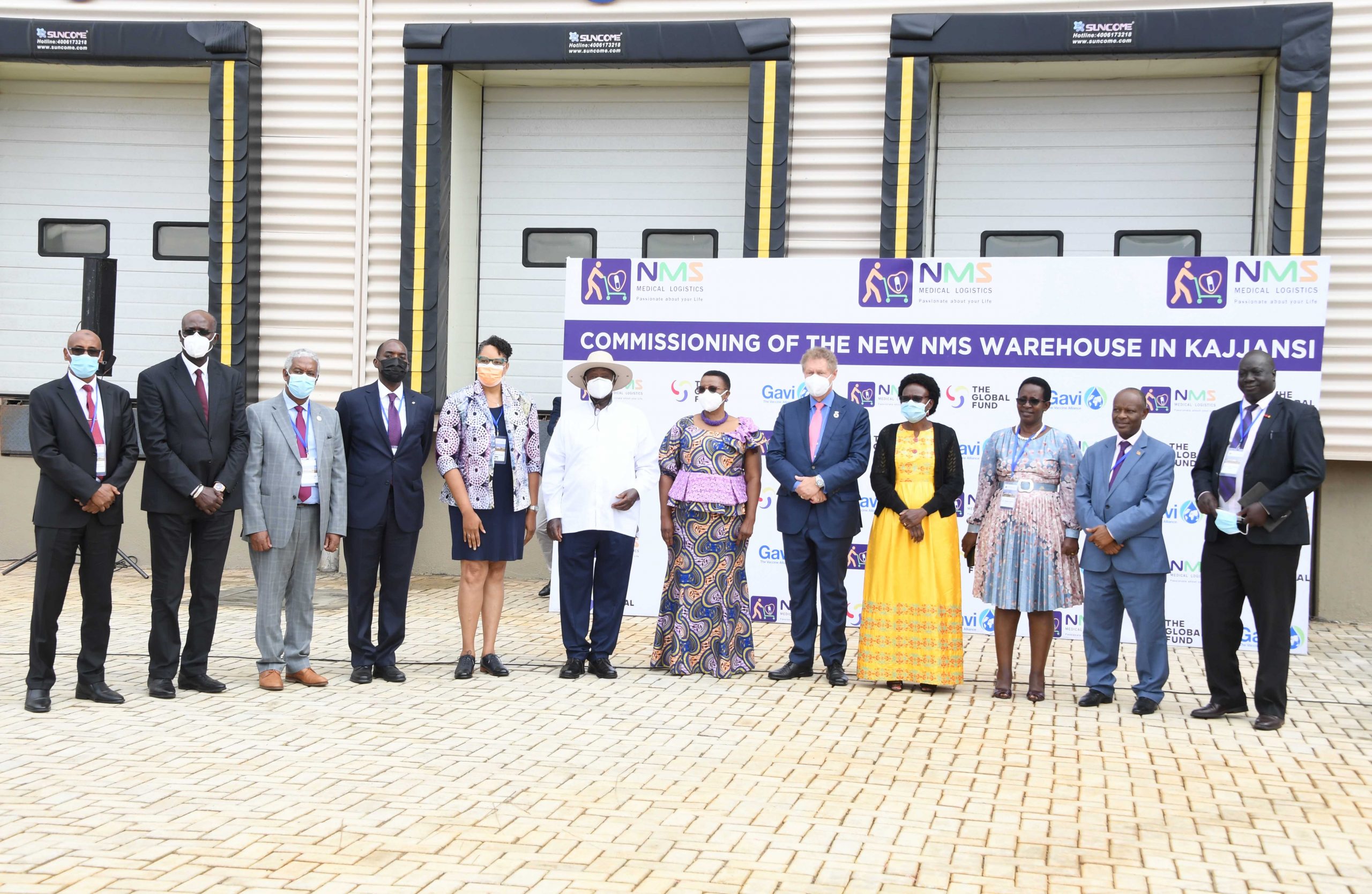 President Yoweri Museveni has this afternoon commissioned the new National Medical Stores pharmaceutical warehouse and office complex in Kajjansi, off Entebbe Road and called for the need to focus on local manufacturing of medicines and vaccines.

While speaking as the chief guest at the event, the President commended the Ministry of Health and National Medical Stores for the complex which he said would solve some of the challenges faced by the sector.

“I want to congratulate the Ministry of Health and NMS for constructing this good warehouse, it is a good one, it solves the issue of storing well and in big quantities,” he said.

He noted that the government is committed to getting out of the dependency syndrome as far as drugs and vaccines are concerned. The President placed emphasis on increased efforts to locally manufacture drugs and medicines in order to have a robust and cost-effective health system in the country.

On public health, Mr Museveni advised the Ministry of health to focus on disease prevention rather than treatment in hospitals, adding that most of the diseases are preventable.

He saluted the development partners for their support in the building of the magnificent storage.

The Minister of Health, Hon. Jane Ruth Aceng noted that the new complex is a demonstration that the government of Uganda is committed to improving medical supplies in the country. She thanked the President for his continued support of the health sector.

The US Ambassador, H.E Natalie Brown, thanked the President and the government of Uganda for their commitment to improving the health services in the country. She said that the completion of the new complex is a big milestone in the health sector.

GAVI CEO, Dr Seth Berkeley underscored the power of partnership saying that working as partners will be a great deal in achieving desired goals.

The Chairman Board of directors of NMS, Dr Nathan Mucunguzi said that over the years the Mandate and volume of Essential Medicines and Health Supplies, handled by National Medical Stores has increased resulting in the need to expand storage capacity at the central level to manage the growing supply chain demands, hence the Construction of this new warehouse.

National Medical Stores undertook construction works of a modern pharmaceutical warehouse and office complex at Kajjansi site at a cost of around 69 billion Uganda Shillings.

The new warehouse project in Kajjansi will improve the storage capacity with additional 30,000 pallet locations of warehouse space, which is almost four times the current capacity at Entebbe NMS headquarters.

The new NMS pharmaceutical warehouse is also a green building with the installation of energy-efficient solutions like the use of solar energy to run the building and natural light instead of artificial power-consuming bulbs.