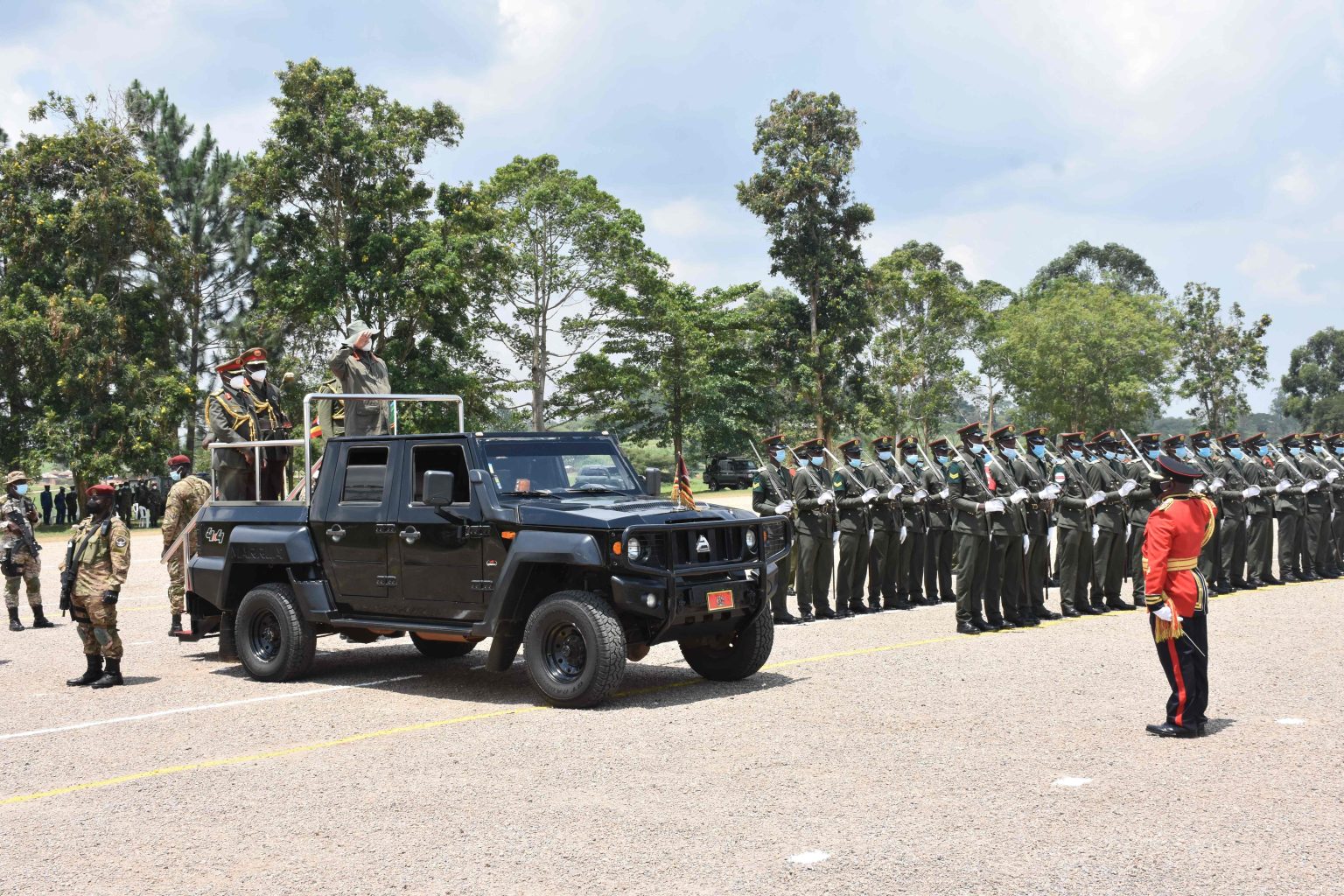 HE Gen Yoweri Kaguta Museveni the President of the Republic of Uganda and Commander in Chief of the UPDF, has commissioned 248 Officer Cadets of Intake 04/2022 at Uganda Military Academy in Kabamba (UMA-K), Mubende district.

President Museveni also used the opportunity to officiate at the graduation of 49 Officer Cadets of Intake 01/2019-22, who qualified with a Bachelors Degree in Defence and Strategic Studies of Kabamba (BDSK).

While addressing the newly Commissioned Officers and Defence graduates, President Museveni started with a Runyankole riddle loosely translated as, “Everybody has their unique knowledge; how does a chicken bring up its chicks without breasts.” He explained that this is how the NRM has been able to build a strong army with very little resources.

The President quoted Mwalimu Julius Nyerere’s wise saying that for one to make a good dough, one must wait for the water to boil to the required temperature. That is where the NRM succeeded, it doesn’t engage in lies, it tells people the truth. You cut your hair according to the shape of your head,” he advised.

He explained that between 1971 to 1986, he and his other colleagues started an army without pay. The Governments of the time were by criminals paying criminals. He quoted examples of recent retirees such as Brig Omule, Late Gen Tumwine and Gen Saleh who together with many other fighters became soldiers without pay.

The President sent his audience into laughter when he said: “All we needed was a gun, bullets for it and food; clothes were optional. A naked man could still shoot and kill.”

He said it is only three years ago that Government could raise the salary of the Soldier at the rank of Private to equate that of a Primary school teacher. It had always been working with no pay, no barracks.

He disclosed that since many of the original NRA fighters were retiring, Government decided to enhance the salaries of Senior Officers, from the rank Major to General. He excited the Private soldiers when he mentioned that their monthly salaries would soon rise to between Ug Shs 1 -1.5 million.

The Commander in Chief also expressed his gratitude for attending the graduation of the Pioneer BDSK group and commended Makerere University (MUK) staff for teaching this new course. He however cautioned the MUK staff against teaching his young soldiers neo-colonial Social Science. “I shall call and ask those teachers what they teach the cadet trainees,” he mused.

He was happy that the trainees were being taught Political Science because only then will they know why they are in the army; to protect the interests of the wananchi (Civilians).

President Museveni encouraged the graduates to pick an interest in fighting. “Be eager to go and fight where duty calls. Don’t be affected by the disease of “headquarters,” he warned.

He then recounted the number of events when, to the surprise of the Tanzanian army commanders, he always went to attack when everybody else feared that the war was too much to bear. He concluded that Government was working on improving the general infrastructure in barracks. “The temperature of the boiling water is now hot enough for us to put the ensaano to mingle our posho,” he remarked.

He emphasized that spouses of soldiers who often stay in barracks must be supported to do economic activities on army land around the barracks such as short-term crops and artisan work. He however warned them not to grow perennial crops like mangoes or develop wrangles over army land.

The President reminded commanders to follow up on the money Government put aside for such projects and cautioned graduates to always be disciplined and keep healthy by especially avoiding alcoholism, promiscuity and drugs. “Health is wealth – be disciplined and look after your health,” he said. He concluded by congratulating the graduates and wished everyone good luck.

Speaking at the same function, the Minister of Defence and Veteran Affairs Hon Vincent Bamulangaki Ssempijja thanked the President for starting UPDF from scratch to a formidable force with international acclaim, that is growing from strength to strength.

He also thanked the President for his visionary leadership that has revamped the economy of Uganda and expressed his joy when he recently witnessed General Officers retiring with happy faces and a good package. “The President has led the country from the economic mess to a thriving, enviable country,” noted the Defence Minister.

He pointed out that the commissioning was Government’s effort to ensure continuity and efficacy and implored graduates to remain committed and focused on the values of the UPDF.

He also reminded the President that the Ministry was keenly following his guidance to ensure that the National Defence College in Jinja is upgraded to the university level and also has a forensic University under the MoDVA.

Hon Ssempijja thanked the UPDF leadership for the cooperation that has always enabled them to collectively achieve their strategic goals.

The Chief of Defence Forces Gen Wilson Mbasu Mbadi (MP) praised the President for continuously building a force that is guided by the gospel of Pan-Africanism, nationalism, democracy and social-economic transformation for the strategic security and unity of the African people. “As a force, we have had successful Pan-African interventions in the region and beyond. For example in Liberia, Equatorial Guinea, Somalia, South Sudan and recently in DRC,” noted Gen Mbadi, adding that all this was because of a strong and disciplined force.

The CDF further applauded the President’s strategic and visionary leadership that has made UPDF grow from scratch to a formidable force anchored on strong civil-military cooperation, nationalism, patriotism and ideological awareness to achieve its mandate as enshrined in Article 209 of the constitution to create a conducive environment for social economic transformation.