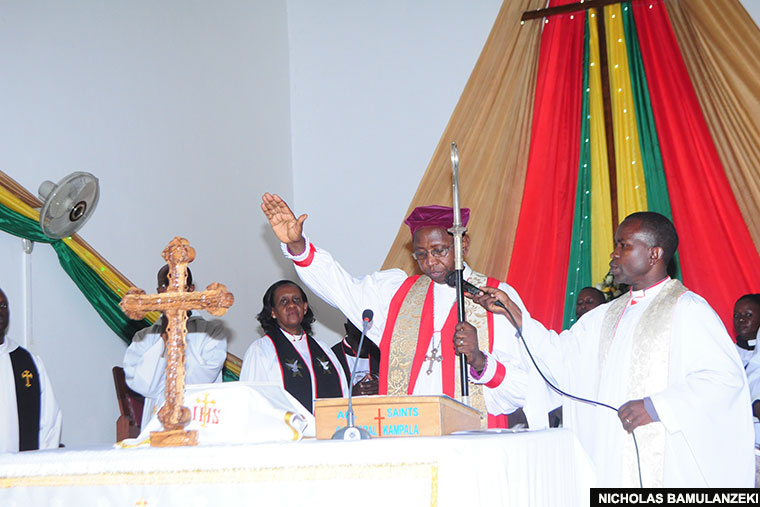 The media has been awash with news and reactions about the former Church of Uganda Archbishop Ntagali, said to have been suspended due to sexual imperfections. I won’t join the queue of those appearing to empathize with the bishop, and will instead call for him to be crucified.

It is not appropriate to attempt to sugarcoat Ntagali’s misdeed by suggesting that he’s only human. No. His action goes beyond him and speaks to the many actions of millions others in society. By shielding him, we risk creating a precedent that people can mess up and go away with it……not just in sexual but other matters of society. And if the “man of God” could stoop so low as to cheat on his wife, then we must question the validity of whatever he has ever preached in his career as a church leader.

Another simplistic way people have appeared to let Ntagali off the hook, was to quote Jesus when he said in John 8, “Let he who has never done it cast the first stone”. But then, our leaders should not appear to load on others what they cannot carry themselves. Church principles have often been emphasized to the letter, to such an extent that even missing service on a Sunday is seen as a crime. Now, why would one want to be religious about going to church every Sunday, when the preacher himself cannot live by what he preaches? This is the seriousness of Ntagali’s crime, and for this, surely, he needs to be crucified for others to learn a lesson.

Let us try to extrapolate this issue into our recently concluded elections. We all know that cheating in an election is bad and should be punishable. Yet it appears a lot of people are too shameless to ride on cheated votes to their positions. Reminds me of a court ruling that said, “There was cheating but the cheating wasn’t bad enough to change the results”! This is as bad as saying that married men are free to cheat as long as they do not make the other woman pregnant! Yet in Ntagali’s case, he even sired a baby as a living testimony of his cheating. The man should be crucified.

That said, I think this whole development, underscores the need to review the traditional practice of one man, one woman. Time immemorial, man after man, have been faulted for straying from their wives and “seeing” another woman. Some women too. Yet we seem to have remained adamant on sustaining blame, rather than attempting to understand in detail why the situation has prevailed across humanity. Is there something inherent about a man’s ability or inability to stick to one woman, that we just have failed to come to terms with? Can a man faced with a tempting woman withstand the challenge posed? Does one’s social position have a sure bearing on one’s control of sexual desire, or does it remain a lifetime struggle still? Is it humanly appropriate for one woman to dominate a good man, if the man could share his goodness with a few others and still remain somewhat loyal? Should society be concerned about bedroom matters of two consenting adults? These are questions that society must never brush under the bed, because they inform our understanding of subsequent acts as we continue to see in society.

The other danger in holding rigid lines about matters of emotion, is that emotions are “made in heaven”, while laws are made on earth. And going by many other practical examples, things that are made in heaven are unstoppable….just as it always rains when it must. No amount of laws can stop a man from getting horny when he meets a woman that he desires, and if that woman is in sync. Women on the other hand have the special ability (made in heaven) to seduce any man of whatever calibre without even saying a single word. Only God knows how he packaged this ministry to make it super tempting.  This is what makes crimes of sexual nature very complicated to deal with, except in cases where force is used.

To this end therefore, should Ntagali still be crucified? I am afraid but in his case, he should. Why? Because his sexual imperfection as a church leader, has an overarching impact on the very moral fibre of the church as an institution. Persons elected to positions that influence the lives of other unsuspecting believers, must conduct themselves with the highest sense of restraint by living exemplary lives. It is very dangerous when we cannot distinguish between the leader and the led. For this, Ntagali should be crucified.