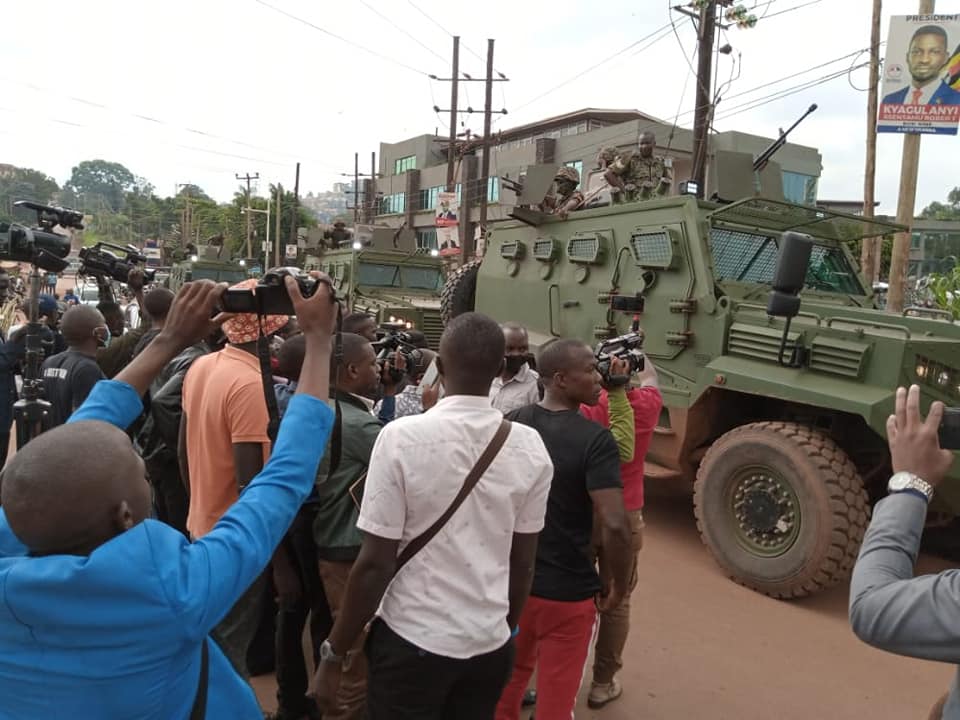 The opposition National Unity Platform Party president Kyagulanyi Ssentamu Robert has accused the Military of disrupting a press conference at the party head offices in Kamwokya.

According to Kyagulanyi whose home is under security siege, the party leadership was addressing the media, when military mambas suddenly parked at their gate, causing disruption.

“Earlier, while the leadership of the National Unity Platform addressed a press conference at our offices, these military ‘mambas’ came and parked at the gate, causing a disruption of an entirely peaceful event” Kyagulanyi said.

He added that at his home in Magere, offices Kamwokya and Busabala are all full of military and police operatives, doing foot patrols while arresting many of NUP supporters for absolutely no reason.

“This all speaks to one thing: those we fear actually fear us the most. They are trying to intimidate us because they are intimidated” he said.

The party spokesperson, Joel Ssenyonyi has announced that they are dedicating tomorrow to prayer and fasting.

“As NUP, we’ve declared tomorrow a day of prayer & fasting. We’ll beseech God to heal Uganda (2Chronicles 7:14). As Mr. Museveni swears himself after a rigged election, killing, incarcerating & maiming pple, NUP leaders will be at NUP offices to pray. You too can pray from wherever you’ll be” Ssenyonyi says.

Last night, Kyagulanyi said that the situation at Magere was tense, with a very heavy military deployment. Adding that all vehicles leaving or coming to his home are searched. They have mounted tents and camped all over.

“Meanwhile, the abductions have resumed. Between yesterday and today, we have received reports of over 50 comrades abducted in different areas of Kampala and Wakiso. They have been doing random operations and picking people up in Kamwokya and the surrounding areas. Those abducted include these three comrades Zale, Kamya and Sharif. Sharif’s crime is apparently playing and selling my music” Kyagulanyi said on Tuesday night.

The army insists they are at Kyagulanyi’s home to offer him protection because he is an important person, while police claims he is planning to hold a parallel swearing ceremony.

President Yoweri Museveni will be sworn in tomorrow, Wednesday 12th May 2021 for his 7th term.