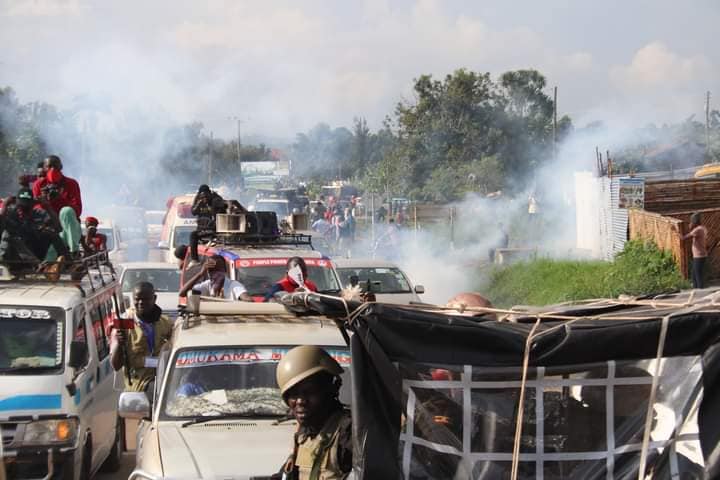 Hell broke loose in fort portal city when police fired teargas and live bullets to disperse supporters of Robert Kyagulanyi alias Bobi Wine the NUP Presidential candidate who had turned up in large number for a rally on Monday afternoon.

“In Fort Portal, it was a hailstorm of bullets and teargas as police & the military tried to prevent people from coming out to listen to our message! Despite all this, many people weathered the storm and turned up! Thank you. Uganda is ready for change!” Bobi Wine said.

He further complained that the police blocked all the main roads and diverted them to the villages, blocked his team from accessing the towns and cities, fired tear gas and live bullets at them and mercilessly beat the people who were trying to come and listen to NUP message, ‘they even tear gassed the people who stood by the roadside to wave to us.’

He however says police did not know that all this was only making the people more fearless.

“Thank you Fort Portal for making a statement. I know that the people who managed join us today are not even 5% of the people that would have come and yet they came in plenty. Now you know why the regime is scared” he added.

During the campaign, the MC kept asking all supporters to maintain a social distance and wear their masks. “Please let us move and maintain social distance. If you have no mask, I am requesting that you wear it now. We don’t want them to say that we have caused COVID”.

Kyagulanyi said his presidential bid represents all youth especially the mechanics, boda boda riders, those in Tea leaves growing business and docors who work so hard, yet get paid little.

Accordint Kyagulanyi, he is also representing Police officers who train to keep law and order, never sleep because they are keeping the country safe yet earning peanuts.

“I am here to represent the police officers who work day and night because they are trained to protect and serve, keep law and order. But I know, that they are paid peanuts. Many of them are ordered to beat us but they don’t want to. I know some have worked for 40 years but are still corporals because they don’t come from privileged families. I know some of them have lost wives during child birth” Kyagulanyi said

He promised to make Fort Portal a real tourist city in Uganda and that if he were a president, his government would have built an airstrip.