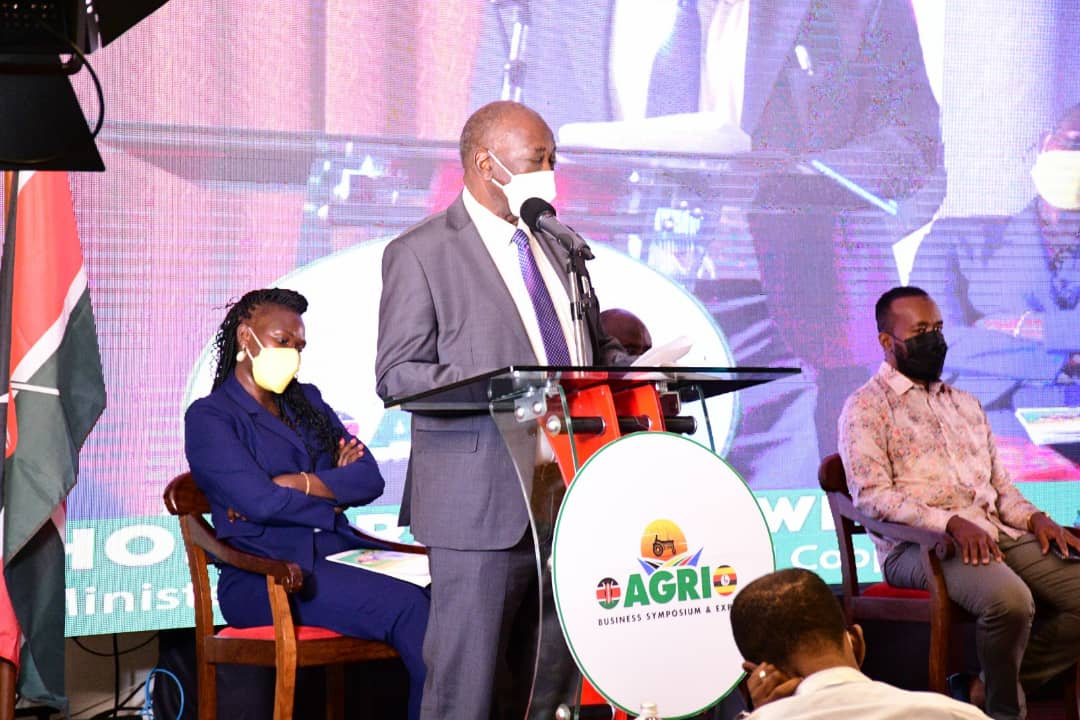 Officials attending the Kenya-Uganda Agri-Business Symposium and exhibition, have been urged to commit themselves to deliberate and achieve a smooth flow of bilateral trade.

The call was made by Hon. Francis Mwebesa, Uganda’s Minister of Trade, Industry & Cooperative during his opening speech at the symposium in Mombasa today.

Mr. Mwebesa called for Consolidation and promotion of Intra-Trade, by addressing the key bottlenecks to economic integration and industrialization among the two economies.

“As I noted earlier, Uganda’s main imports from Kenya are manufactured products while exports to Kenya are agro products.  Improved trade facilitation from both sides is key in harnessing our economic ties” he said.

He also called for Non-tariff barriers, explaining that both countries face significant Non-tariff barriers among themselves, which are a hindrance to movement of goods and services; especially for Micro Small and Medium Enterprises and small cross-border traders; commitment and deliberate efforts to resolve the Non-tariff barriers should form the basis of consolidating our trade and economic ties.

He commended the Uganda High Commissioner in Kenya, the Consul General in Mombasa and the staff for the coordination and organising the symposium and exhibition.

He noted that Kenya and Uganda are strong economic partners where both depend on each and are strategic export markets. Trade between Uganda and Kenya is governed by two frameworks:

The East African Community (EAC), through the Treaty Establishing the EAC and relevant Protocols such as the Customs Union Protocol, the Common Market Protocol, and institutions to administer the Agreement and Protocols (including the Council of Ministers, the Sectoral Council on Trade, Industry, Finance and Investment/SCTIFI, Coordination Committee, EAC Secretariat).

“As much we talk of the positive trade performance among Uganda and Kenya, notable challenges in terms of non-tariff barriers on trade have been recorded in recent years.

Both Uganda and Kenya have reported several Non-Tariff Barriers (NTBs) that affect smooth flow of bilateral trade.  There have been several efforts to address them, the latest being the Bilateral Ministerial Meeting held in April 2021.